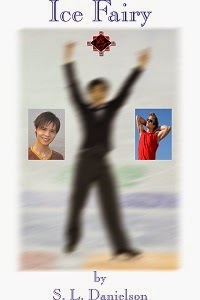 Samuru (Sam) Ogawa is on track to be in his life’s dream…the Olympics as a figure-skater. All is gliding along smoothly until he literally bumps into one of the biggest bullies he’s ever met; a hockey player named Brett Zephyr. He’s well known for being a brash, hot-headed, caveman who thinks about nothing but hockey and his bimbo girlfriend.Things are tense and the walls between them build until unforeseen events begin to break the ice between them. But as the coolness melts away; other players come in to build them back as quickly as they fell. Family forces, friends, and secrets threaten to destroy all they’ve created.Can Sam and Brett make things work or are they just too opposite? Can a figure skater find true love with a hockey player?

A hockey player. A figure ice skater. A romance on and off the ice.

Sam had worked hard to get to where he was, at the top of his sport and the Olympics just within his reach. Working hard, however, is not a glamorous thing to have do, especially when in a high school where the jocks are at the top of the heap and school bullying was the norm. To top it off, his coach was not such a nice guy either, being a bully himself. Sam skates on to perfect his art until he runs smack into a solid wall of endless chest then drops to kiss the ice.

Brett Zephyr was the hockey captain and he was good. He was also a giant of a young man, having the physique of a Viking. He was fantastic on the ice: strong, quick, temperamental. He was everyone's dream of what a hockey player should be. Having to share the ice with a figure ice skater was a bully's dream and he acted on it. Until Sam skates into his endless muscled chest and drops to kiss the ice.

This is the story about two young men who were perfectionists of their sport, the ice being the common denominator. Whilst the ice skater saw as a barbaric sport, the hockey player saw a girly one. Opposite poles. Negative and positive. When the two meet, sparks fly.

For Sam and Brett, the sparks did fly but in the most unexpected way. Never thinking they could make a friendship go, they had the surprise of a lifetime when they did connect and become good friends. When Cupid's arrow hit both of them... well, that is the point of this story isn't it?

Ice Fairy is not a unique plot, in fact it is quite a common one. The angst of young love complicated by homophobia and regular bullying is also a common theme. The story of how Sam and Brett connected, now that was sweet, tender, and very romantic.

I really loved reading this, even if it did not turn out as light hearted as I thought it would be. It

was not spectacular, but it was a read that stuck and would not let go. Soon, I rooted for Sam and Brett and wished all the best for them. Things may not go their way as a regular HEA story should, or even an HFN, but it was more realistic that way and may be just one of the reasons why I just wanted the both of them to make it.
Posted by multitaskingmomma at 12:00 AM