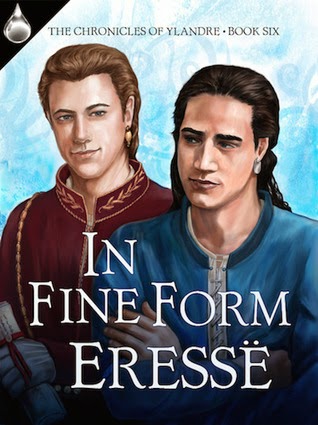 Guile is an asset in foreign relations, but an affliction when it comes to affairs of the heart.
A bastard of unknown parentage, Yandro Vaidon was born saddled with a huge disadvantage. The nigh rigid class structure of the dual-gendered realm of Ylandre relegated him to the bottom rungs of the social ladder and promised a dim future. Worse, the endeavor to win respectability was arduous—most claimed it was impossible. But by dint of hard work, perseverance and instances of plain good luck, Yandro rises higher than even he had hoped. However, he quickly learns there are hurdles to overcome even at these heights. Not least is his inconvenient attraction to a colleague deemed way beyond his reach.
Scion of House Essendri, the reigning dynasty of Ylandre, Jareth Hadrana is gifted with more than his fair share of beauty and wit. The kingdom’s preeminent ambassador, he has surpassed what is usually expected of a fief-lord’s second son. But while his high birth and family wealth opened doors for him, Jareth’s success stemmed from his own efforts to make something of himself other than the idle fop or swaggering rakehell that was the lot of many younger sons.
A coincidence of interest drew Jareth and Yandro to the same profession, but a king’s intervention throws them together in an association that soon turns into mutual desire. However, prejudices have largely kept the aristocratic True Bloods and lower caste Half Bloods on opposite sides of the social and romantic divide. In addition, reticence born of distrust and a secret like no other hamper their attempts to span the chasm between them. It will take more than their shared passion to convince them to lower their protective walls and risk their hearts in full.

Eressë's Chronicles of Ylandre series is a one-click for me. I have been following this ongoing epic fantasy tale about the world of Ylandre, a world where there is only one gender, for a few years now. It is a beautiful fantasy world and yet it could be dangerous, too, for it is filled with intrigue, both political and not.

In this latest installment, we finally have the story of Jareth Hadran, one of the cousins to the king whose ambassadorial skills guarantee peace within their lands. Although he is only a second son, his rise in government is much envied by many but could never be surpassed. He has a skill, a talent and a history that none others, save a few, have.

Yandro Vaidon was an orphan who should never have had the future he now holds and enjoys. His emphatic skill had earlier been discovered and nurtured by no less than the House of Essendri itself because the king recognized a prized gift when he sees it. Trained at a young age in government, the king assigns Yandro as adjunct to Jareth for he saw their talents complemented each other.

Despite all prejudice from the aristocrats, Yandro quickly proves his skills and becomes the most trusted, and longest lasting, assistant to Jareth. With each success they shared, they become closer and more dependent on the other. When a young upstart unexpectedly joins Jareth's staff, Yandro not only finds himself at odds with this new addition but with Jareth himself.

Of all of the Ylandre books, this probably has to be the most politically driven story I have read. Whereas all the others focused more on the romance between the future spouses usually going on within huge dramas and personal angsts, this story of the developing romance between Jareth and Yandro felt more like a courtship than anything else. Their romance began to brew a long time ago but they both never really did anything about it. They were mostly deeply embroiled with fending themselves from political intrigues and attacks but always had each others' backs' covered. When Jareth does finally make a move, it is welcomed but with hesitance for this Essendri is well known for his conquests and Yandro did not really want to be another notch on the post. Both men face the trials on their relationship and in the process, learn more of the other and of themselves.

This has a different feel from the rest of the books and for those who are looking for a lot of angst, drama, heartbreak and mpreg scenes, they won't find it here. As a sixth installment to the series, this is definitely a beautiful addition and satisfied my craving for more stories from the world of Ylandre.