Review: The Mating of Michael (Sex in Seattle #3) by Eli Easton 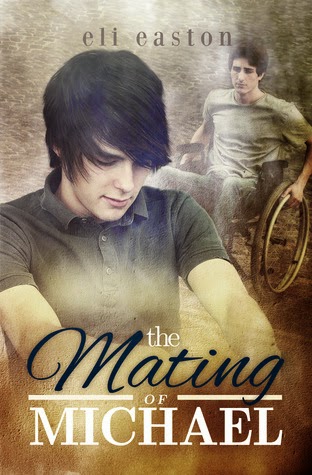 Note: This can also be read as a stand-alone title.
Everyone admires Michael Lamont for being a nurse, but his part-time work as a gay sex surrogate not only raises eyebrows, it's cost him relationships. Michael is small, beautiful, and dedicated to working with people who need him. But what he really wants is a love of his own. He spends most of his spare time reading science fiction, especially books written by his favorite author and long-time crush, the mysteriously reclusive J.C. Guise.
James Gallway’s life is slowly but inexorably sliding downhill. He wrote a best-selling science fiction novel at the tender age of eighteen, while bedridden with complications of polio. But by twenty-eight, he's lost his inspiration and his will to live. His sales from his J.C. Guise books have been in decline for years. Wheelchair bound, James has isolated himself, convinced he is unlovable. When he is forced to do a book signing and meets Michael Lamont, he can’t believe a guy who looks like Michael could be interested in a man like him.
Michael and James are made for each other. But they must let go of stubbornness to see that life finds a way and love has no limitations.

Of all the men introduced in the Sex in Seattle series, it is Michael Lamont that scared me the most. I had all kinds of thoughts and reactions to his being a sex surrogate and - mea culpa - I did not even bother to research or read up on it. So imagine my reaction when I saw the next book was going to be about Michael. I dreaded the thought of reading it. However, it is an Eli Easton and one of the trusted authors on my list, so I went and opened it.

And it broke my heart. In a good way.

The Mating Of Michael is about Michael the nurse/surrogate whose life we had a glimpse at in the first two books. We knew him as an easy guy to be with, admired by his co-workers, and an all around nice guy. What we did not know was how difficult his chosen career placed a toll on him and the fact that it is misunderstood by all is not helping matters. With this third installment, we finally find out who Michael is and why he deserves his chance to a loving and committed relationship.

James Gallway, a.k.a. Author J.C. Guise, found fame as a celebrated science fiction author at a young age. Reclusive since day one, his presence in a book signing event triggers a flow of events that changes his life and eventually his work. At that book signing event, he meets Michael and the sparks sizzle. But James is bound to a wheelchair due to his polio and he fears the rejection he commonly gets all the time. See, many never look past James' polio stricken legs and they define him by those legs. No one ever sees James as who he is as an individual who has a brilliant mind. Until Michael enters his life.

After a series of near-stalking events between the two men, they soon find out they are great friends together. When their friendship is brought to the next level, it surprises James that Michael is very accepting of his disability. When he finds out about Michael's secret part time job as a surrogate, he felt betrayed and it almost ends them both.

The subject of sex surrogacy is very, very sensitive and many who read this story may be accepting of it as long as it stays fiction. James' reaction to Michael's profession was overshadowed by speculation and misassumption and it is to be expected. Some liken the profession to prostitution. I did, to be honest, until I read this story and took time to do some bit of research.

This series deals with sexual performance disabilities and related problems but the first two books dealt with simple ones that are quite common. I love this series for it treats such issues lightly and, laced with romance, it makes it for fine reading. But Michael's story is different. I honestly feel that this was the most sensitive of all the books and probably the best written of the lot. I may even go further to state that after reading all of Ms Easton's works, this is probably her best written.


Posted by multitaskingmomma at 1:37 AM