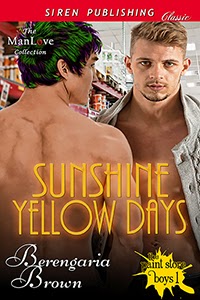 [Siren Classic ManLove: Erotic Alternative Romance, M/M, HEA]
Edward Robinson is a failure, nervous, frightened, bullied, and unemployed. Basil King, a flamboyantly gay interior designer, sees the man behind the pain. He has designs on Ed. Basil is one of the owners of The Paint Store, along with Cuthbert, Roland, and Max, and he offers Ed a job there. As Ed settles in and enjoys the work, Basil invites him out to a gay bar for a drink.
Ed has tried so hard to fit in, to be invisible, to be ignored. Someone who looks and dresses as outrageously as Basil, yet without being hated, is an inspiration to him. Not that he could ever look or act like that. But maybe working for Basil and his friends will help him get some self-confidence so he can begin to reclaim his life and his self-respect. When Basil wants to date him he can’t believe anyone would care for a person like him. But he accepts the date anyway.

As the blurb says, so it is the story. Edward was very insecure in himself and whatever innate ability or courage he had, they were lost in oblivion somewhere, that he came out a total loser, a failure. All he needed was something, someone, that could give his ego a little boost so his inner strength comes out and he starts believing in himself again. If it had to take a paint store to do it, so it does. If it had to take wearing sunshine yellow overalls, so it shall. If it takes a man with purple and green hair with extraordinarily flamboyant ways, then he definitely gets on the move to a win-win situation.

Basil is a  colorful and highly artistic interior designer who buys into a paint store business with a few friends he met at a seminar. They initially made a go of it and decided to put up a store selling something they all knew a little about each. Basil, being the designer that he is, definitely knows about design and colors so is in charge of the store uniform he swears will get the staff standing on tip toes happily on their work shifts and their customers clamoring for attention.

Apparently, it all works out for both Ed and Basil. Both hit it off on the first second they meet and immediately, Basil sets his eyes on the quiet Ed knowing he could trust him to be good at his job and eventually gain his confidence back.

So, yes, all these happen including a trip to a gay bar and eventually to dancing between the sheets. Goes on for some time and et voila! they are lovers and partners.

Well, if you want short reads where there is no need to think or want a little story where a brush on some drama is the highlight of the day, then this is for you. Very, very light read and quite well written. Nothing fancy but highly entertaining.

Posted by multitaskingmomma at 5:08 AM