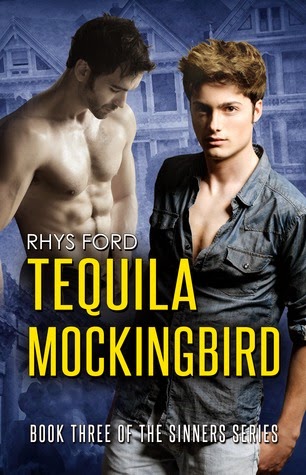 Lieutenant Connor Morgan of SFPD’s SWAT division wasn’t looking for love. Especially not in a man. His life plan didn’t include one Forest Ackerman, a brown-eyed, blond drummer who’s as sexy as he is trouble. His family depends on him to be like his father, a solid pillar of strength who’ll one day lead the Morgan clan.
No, Connor has everything worked out—a career in law enforcement, a nice house, and a family. Instead, he finds a murdered man while on a drug raid and loses his heart comforting the man’s adopted son. It wasn’t like he’d never thought about men — it’s just loving one doesn’t fit into his plans.
Forest Ackerman certainly doesn’t need to be lusting after a straight cop, even if Connor Morgan is everywhere he looks, especially after Frank’s death. He’s just talked himself out of lusting for the brawny cop when his coffee shop becomes a war zone and Connor Morgan steps in to save him.
Whoever killed his father seems intent on Forest joining him in the afterlife. As the killer moves closer to achieving his goal, Forest tangles with Connor Morgan and is left wondering what he’ll lose first—his life or his heart.

The story of Sinner's Gin the band continues. After the tragedy, the losses and the reunion, the band may just reemerge out of the shadows and be complete. But before they could do so, they, Miki and Damien, the two remaining survivors of the original band, must first have to find a drummer and a bassist.
Forest is a drummer. He taps the beat, he thinks in beats, he loves the music. He takes it everywhere he goes, it is woven into his soul. A soul that has been through the wringer of a mother who pimped him out to the highest bidder. He had demons hiding within him and he never let anyone in. Until Frank came along.

Frank saw the bright soul within Forest and saw his potential. He made sure to get that potential out and he succeeded. Adopting the young boy as his own son, he saw him rise from the ashes and make good. But tragedy strikes and Forest loses a father in the most grisly and explosive manner. The scene of the crime is enough to lay him bare until Connor Morgan came along.

Connor was that quiet and enigmatic brother to Miki's Kane and cousin to Sinner's Sionn. He was the epitome of a cop. Badass, patient, deadly, serious, loves donuts and nacho cheese. He is a natural nurturer and when he sees Forest break down at the death of his father, he fell. Deep down into the abyss called love.

Okay, so this is a sappy story IF we are talking all about a simple romance here. Seriously, why rate a sappy, cheesy, romantic story a five stars? Had you read this Sinners series before, then you know that it is only the likes of Rhys Ford who can weave a tale so complex - action packed, bloody, gory, mysterious and suspense filled from the first page of the book to the very end. (That end is another story altogether and I won't touch it here for I need to read it again so I can be justified in screaming out my frustrations!!!) - and come out with a winner of a read that set my imagination racing and my heartstrings ringing.

Ms. Ford has this talent for making such visual reads. Her seemingly ordinary-reading conversations between the characters and side characters spins a mighty tight web of visual effects. It is impossible not to continue reading her works for it is in these conversations that the whole story unfolds. And what a story it is.

This does stick true to the rest of the series, where the mystery is never revealed until the very end and opens to more mysteries like the next installment. (which sends me into a frenzy for I cannot continue waiting for that fourth one to be released like this one was released oh so long ago and I had to content myself by reading the novella 2.5!)

So yes, author Rhys Ford has managed to grab my imagination with her work and made me lose the hours into a story of romance that is filled with dripping details..... Now all we need to wait for is that bassist to man up and be part of the band.

Now for that novella! 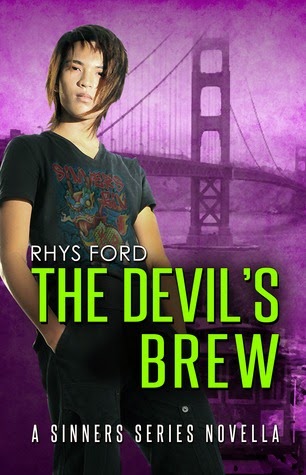 by Rhys Ford
Published May 21st 2014 by Dreamspinner Press

My Rating: 4 of 4 Stars (based on Short & Light Read Category)

A Sinners Series Novella
Miki St. John’s life has been turned upside down but it’s the best thing that’s ever happened to him.
His best friend, Damien Mitchell, is back from the dead. He has a dog named Dude. And more importantly, he and his lover, SFPD Inspector Kane Morgan, now share Miki’s converted warehouse.
For the first time ever, Miki’s living a happy and normal-ish life but when Valentine’s Day rolls around, Miki realizes he knows next to nothing about being domestic or domesticated. Nothing about the traditional lover’s holiday makes sense to him but Miki wants to give Kane a Valentine’s Day the man will never forget.
Can he pull off a day of wine and roses? Or will his screwed up childhood come back and bite Miki in the ass?
Again.

While awaiting impatiently for Tequila to be released, Ms Ford not only released several

unrelated stand alones, but she was mean enough to release this short little story called The Devil's Brew. She is a witch that author for she did indeed brew a little story that gave us a little peek into the lives of Damien and Miki. We have a dog, we have a lover's holiday to deal with and a huge block of wood. It makes no sense whatsoever, this little story, but it makes sense in its own way. We all get the chance to be cuddled into the hilarious lives that these two friends live now. A life so different from what they had faced in the past. This is their time to cuddle their lovers into their hearts and arms and this positively drips Valentine's Day. I read this then but I got peeved because I wanted Tequila and I got roses instead. And a block of wood. Unfortunately, I still fell for this hook, line and sinker, fell for the band that was Sinner's Gin.


P.S. Yes, all are recommended if you still don't get it!

Posted by multitaskingmomma at 12:23 AM