A Bodyguards Inc book
Bodyguard Adam Freeman draws what everyone else thinks is the short straw at the convention for a procedural cop show - as bodyguard to TV actor Logan Brady. Or as the Internet has labelled him, Logan 'Sex God' Brady.
Logan is taking part in a convention at a London Hotel for his show 'Night Cop' and someone is threatening his life.
Adam gets more than he bargained for when his client combines coming out of the closet with them both trying to stay alive. 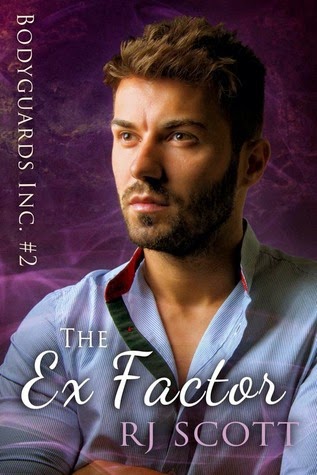 When Bodyguard, Ben Collins, finds Daniel Lincoln in a room, hiding and hurt, he doesn't immediately think Daniel is the victim of abuse. Daniel is good at pretending and being a finalist in a TV singing competition he seems like he has it made.
But something about Daniel calls to Ben's need to protect and he hands Daniel a card to contact him if ever Daniel needed help. Abruptly, after one frightened phone call from Daniel, Ben is racing to Daniel's aid and what he finds is a horror he can't imagine.
Daniel is trapped in a relationship where anger and controlling hate are the only emotions he is given. When his boyfriend crosses the line and leaves Daniel vulnerable and broken there is only one man that he wants to call.
The sexy bodyguard who promised he could help him.

Bodyguards Inc. is a company established by American Kyle Monroe. Bodyguards Adam Freeman, former cop, and Ben Collins, former rugby player and ex soldier, work for the company and take on different jobs to protect those whose lives are being complicated by threats from without.

In the first book, Adam is given the job of protecting pretty boy actor Logan Brady who is being threatened by an unknown stalker fan who cannot seem to differentiate between role play and real life. As the threats escalate from mere letters to the more physical, it is now Adam's job to make sure that no harm touches Logan as he meets and greets his fans in the science-fiction fantasy convention (ComiCon?) being held in London. At first the job is just a job until Logan sets eyes on Adam and knew his day had finally come to decide to out himself and get a chance to happiness.

In the second book, Ben stumbles upon singer contestant Daniel Lincoln. He finds him drugged and beaten but still standing strong. He has a voice Ben fell in love with and actually voted for him in the local TV singing competition. When he gets called a few months later, a call for help from another contestant to check on Daniel, Ben drops everything. Good thing he did for now, Daniel was in bad shape and his ex-boyfriend made sure he not only lose out financially, but emotionally as well.

This series deals with violence and abuse and should have read super drama and all. Not the way author RJ Scott did it though. It is lightly written without too much information dropped into a reader who seeks to relax into a good romance.This actually reads as a thriller/suspense/mystery romance with a little bit of spice between bodyguard and guardee. The men are obviously very attracted to each other and there are times when the instant attraction sort of blurs within the lines of rebound love like in Adam's and Daniel's story. Thankfully, there is no rebound at all. It is just that both Adam and Ben are protectors and they make both Logan and Daniel feel free and safe for the first time.


There is nothing standard in these men either. Adam comes out as a bigger than life bodyguard but he is actually physically shorter than Logan. Ben is a huge guy and is the epitome of a huge bodyguard and yet he is a really gentle giant, exactly what Daniel needed - a trunk he could climb on and feel safe in especially after having been subjected to much abuse.

Both books contain some bits of excitementement that involved violence and then some but again, these were not overwhelming and made these into cozy suspense thrillers instead of full action packed and gory ones.

I saw The Ex Factor title and cover and it jumped right at me. I loved the look, I liked the blurb and best of all, I liked the plot. After reading it, I decided to go ahead and read the first book for I was really curious about Adam and Logan mentioned several times in the second installment. Each book is written as a standalone but this did not stop me from jumping back to the first book for this is clearly a lightly written series to relax and enjoy into despite the subject matter. In the end, I just fell in love with these men and their heroes and I can't wait for when it gets to be Ross' and Kyle's turn.