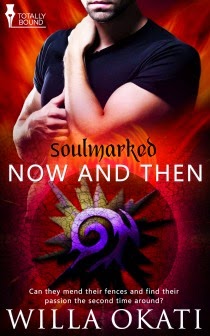 My Rating: 3 of 4 Stars (Based on Short & Light Read Category)

This is book one in the Soulmarked series.
Robbie and Ivan wrought havoc on their first chance at love. Can they mend their fences and find their passion the second time around?
Soulmarked as mates, Robbie and Ivan come from different worlds. Robbie’s the oldest son in a long line of outlaws who live squarely on the wrong side of the tracks, and Ivan’s family tree is packed with law enforcement. That didn’t stop them from falling in love, but when they risked tearing each other apart, they cared enough to let go and hope they’d find a better life.
Years later, the strength of their soulbond still burns bright when chance brings Robbie and Ivan together at the football game of the year. The passion they felt for one another is as powerful as ever, bringing them into explosive contact. They’re not the boys they used to be—Robbie’s turned his life around and raised his younger brothers to be good men, and Ivan’s learned to stand tall and mix justice with compassion. But though they want to hope they can be happy now, not everything has changed. Maybe not enough has changed.
Or has it, after all?
It’s up to Robbie and Ivan, now. Only they can make the choice that will change their lives forever. 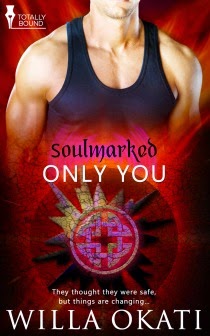 My Rating: 4 of 4 Stars (Based on Short & Light Read Category)

Lovers and best friends, the unmarked Nick and Barrett risked everything to present themselves as a bonded pair. They thought they were safe, but things are changing…


Nick and Barrett aren’t soulmates. Lovers for years, they’ve rolled the dice and taken a gamble on presenting themselves as a bonded pair. They knew the risks, but think they’re safe. They’re well over the age when soulmarks usually appear, and none of their friends or family are any the wiser.


Until now. After exposure to the incendiary reunion between his friend Ivan and Ivan’s soulmate Robbie, Nick’s soulmark has begun to emerge.


Faced with a devil’s choice, Nick and Barrett are forced to confront the real possibility of being driven apart—unless they can fight the animal urge to find their mates. Do they have what it takes to stand in defiance of double jeopardy, all for the sake of love?

Book 1, Now And Then, is pegged as a reunion story between soul mates who had their chance a few years back but due to immaturity and the inability to compromise the right way, decided to part ways. A few years later, like lots of years later, the two men meet once more and they go after their second chance. Thing is, when Robbie and Ivan reunite, it is all sexual in nature and it was a good thing they got interrupted. If not, they could have gone the same way they did and break each others' hearts once more. This interruption led to some communication and a lot of soul searching which leads them to their HEA.


Book 2, Only You, is another short and sweet story. I really felt for these two men. They had loved each other for so long, lived together, even bought a house together. They were solid mates. But according to their world, they were not soul mates, because they did not have their soul marks.

Quite a different story from the first book, the story of Nick and Barrett was sweet but it was heartbreaking, especially when the mark started to appear on Nick. They now had a choice: to go on with their lives as is, or to finally face the fact they may not be meant to be with each other and have to part ways, even loving each other the way they did which was deeply and unconditionally. The appearance of the mark rock their world and they did not really know how to handle it. Will they be strong enough to finally face their new reality?

I did not really get that invested in book 1. I read it after I read book 2 and if I had not, I would have gotten lost. Totally lost. For one thing, not much was said about this alternative world of soul mates and the idea of it being a shifter world, too, was not explained all that much. Reading this after the second one made it better for me, I guess, for the second installment explained the back story of this whole world and I was able to integrate whatever information I got and placed these in the holes left empty in the first book.

I really loved Only You. It was short, sweet, and sad. It was also a bit of reality check for this world where those who truly love each other may just have to separate because they were not fated to be together. Also, Nick and Barrett's story was much clearer and more real in a way. Theirs was destined to be a losing battle against their known world which fortunately turned out in their favor at the end.

Soulmarked is a different take from the other mate-romances I have read but it is similar as well. The realities these men face are not so nice. I expected something like a mine-shaking-event and probably a primordial scream here or there, but fortunately, there was none of that.

Smoothly written, nicely executed, it is a perfect short read series to while the time away and simply enjoy. However, if I were to do some bit of recommendation, I would read the second story first THEN the first. It made it all clearer for me for some reason and I bet done this way it would be clearer too for those who have not read this series yet.

There is a third book coming, and it is available for PreOrder. The teaser excerpt at the end of the second book is enough to get my curiosity meter pinging as this involves a character we meet in book two whom I immediately got to love and pity at the same time. I cannot wait for Handle With Care. (FYI: it's avaibable for Early Download July 25th!)