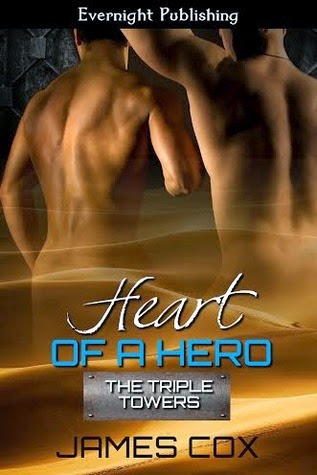 Be Warned: m/m sex, rimming, sex toys, spanking, bondage
He made it to paradise on a lie...
Kallen is a hero. He single-handed ended the war. At least, that’s what everyone thinks. The truth is that he was at the right place at the right time. As the hero, he gets a room in the heavenly triple towers and enough mouths on his body to please him every hour of every day. However, guilt and danger rise when a man starts searching for the truth. When the investigator is this sexy, he may just blow his secret, among other things.
Lorn is furious when the spy among them is named as his dead younger brother. He is determined to find the truth of what happened even if it means destroying the nation’s hero or the man he’s slowly falling for.
In Kallen’s world, bravery will get a person killed, so how exactly is he supposed to prove to Lorn that he has the heart of a hero? 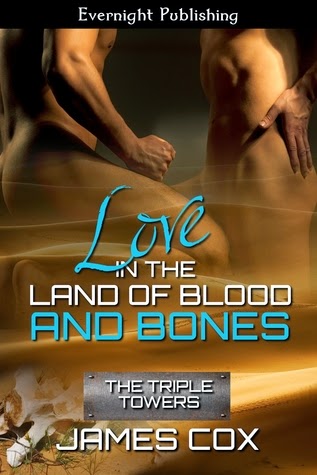 
They are no longer heroes...
The survivors of the Great End were on the brink of death. Three towers were built with the last of the government’s money and power. The wealthiest survivors were given residents within the Triple Towers. A wall of steel was constructed to surround them.
Lorn is now exiled to over that wall and his lover Kallen courageously follows. Kallen knows the dangers and violence that awaits them. He managed to survive a terrifying childhood in the wastrel camps. It’s not just the sand that threatens their love: old enemies, former lovers and the traitor from the triple towers returns.
Can they find love in the land of blood and bones?
(Warnings:m/m sex, sex toys, bondage, menage sex (MMM)

This is series is set in a dystopic Earth where the rest of the world is barren and destroyed. To protect themselves, save themselves from the destruction and from starvation, the president of the then United States is left with a land that is broken and deadly. With the help of the super rich, they build three towers, a thousand floors high each, and all those who could afford to pay got to stay. The scientists went with them and all those others who could make a go on survival. What was left outside the walls were the wastrels, the rag tag of surviving humans who managed to live just long enough to beget children, starve some more and eat whatever they could scrounge on. Mostly, they relied on the sand roots which gave them water, protein and some bit of nourishment. It was not a world the weak could survive and many wastrels dreamed to be within the walls of the towers.

Kallen joined the tower guards to get his chance to live within the walls but he had to prove his worth for ten whole years before he could do that and he may not survive them. When he gets in the middle of an illegal exchange he is saved by a man with brilliant blue eyes but before any connection could be done, the shots are fired and his savior is killed and named traitor. Kallen is named hero for discovering the Tower spy and the leader of the insurgents. Within hours, his life is changed and he now lives within the very walls he craved to be in. But all was not so nice and comfy within these walls. Politics run the place and there is someone whose eyes speak of hatred that haunts his every move. Of course, Kallen gets to sample and enjoy the men who fall for his hero label but he is not happy.

Lorn lost his brother, the man he trained to be the best of the Tower soldiers and now named traitor. He does all he could to investigate how this could be so. He and his brother were born and raised within the Tower and sacrificed their lives when they answered the call to protect its walls from insurgents. He has to find out if Kallen, the so called hero, is speaking the truth. What he discovers is someone who did lie, but not for the reasons he thought them out to be. Lorn and Kallen get together to find out the truth of that fateful day but when they finally discover the identity of the spy, Lorn loses all and is exiled.

Book 2 opens with Lorn and Kallen on the move outside the walls. This time around Lorn depends on Kallen for he knows nothing of this harsh world. Soon they meet a camp of wastrels who may or may not help them. When they are met with betrayal, they fight for their lives and struggle to survive on their own once more.

Kallen had lost a best friend and lover before he was named Hero of the Towers but never found who killed him. When he and Lorn run into the brother, things get clearer and they help each other out. With their new friendship forged, they may just have a chance to survive in the sand dunes before they are once more called to help the citizens of the Triple Towers.

This was a fantastic light read, especially when I did so back to back. Both books end hanging with a lot of things resolved and new ones rising but not quite visible yet. This is not the end of the story of Lorn and Kallen. They are now faced with a new mission and they must do good to survive both that and their love for each other.

I go to James Cox when I want a read that screams HOT and gritty! I chose The Triple Towers series because I also wanted science fiction with a dash of Cox. I got my wish and more.... like a Hot! take on Bertie Botts Every Flavor Beans (you need to read this to know what I am talking about hehehehehe - and it's not beans either heheheheeeeeeeeeeee)

Posted by multitaskingmomma at 3:38 AM