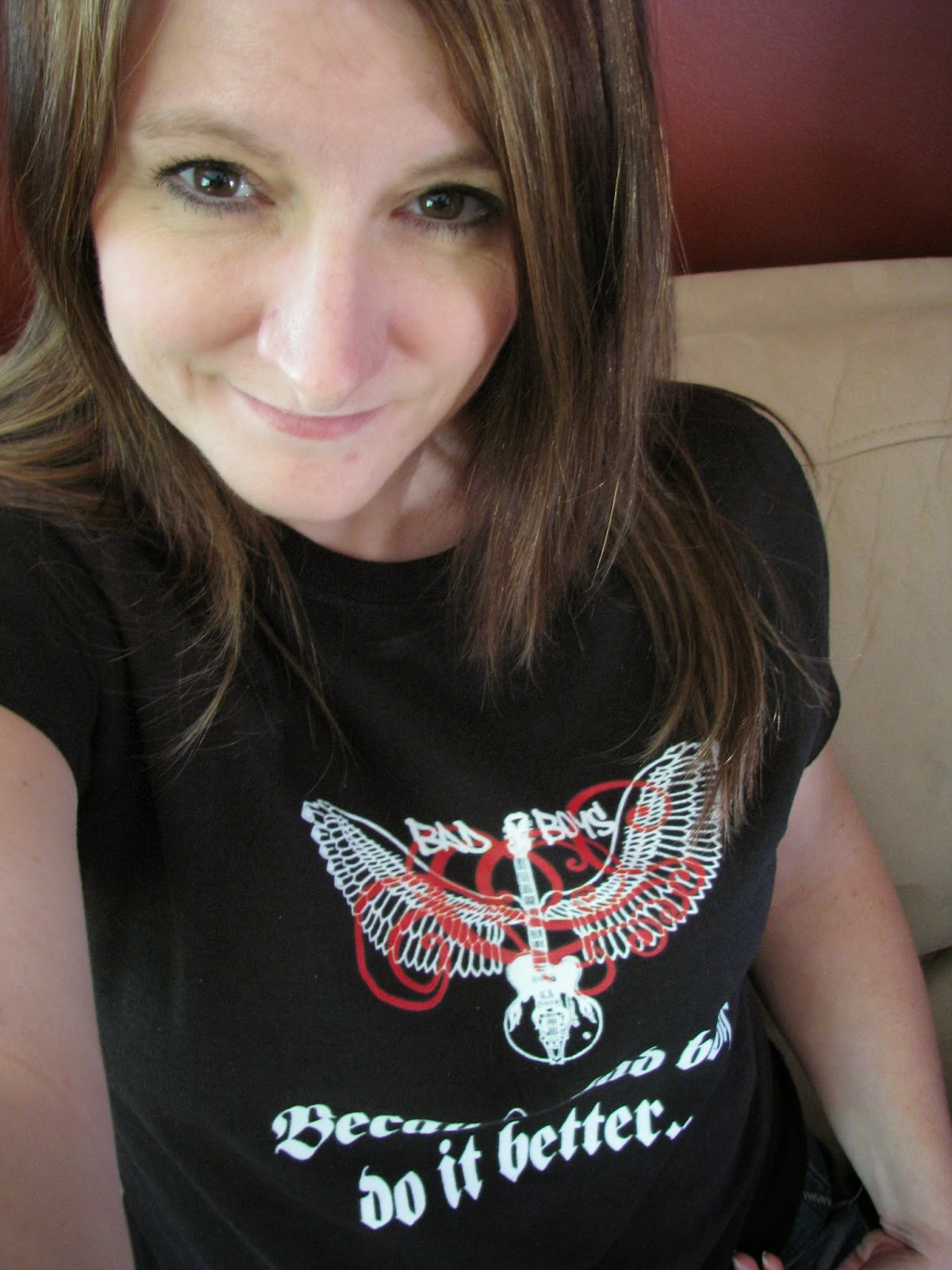 From a young age Renee Dyer had a love of writing, starting with a doodle pad at age four that soon turned into journals and later computer documents.  Poetry became short stories and short stories became a novel.  Although she's surrounded by males all day having three sons, a husband and a hyperactive chocolate lab, she still finds time to be all woman when she escapes into the fantasy of reading and writing romance.  That is, until she needs male perspective and garners eye rolling from her husband.  She's a true New Englander.  You'll find her screaming profanity at her TV while the Pats play and cuddling under blankets during the cold seasons (which is most of them) reading a good book.  To her snow is not a reason to shut things down, only a reason to slow down and admire the beauty.  Ask her questions and she'll answer them.  She's an open book, pun fully intended. 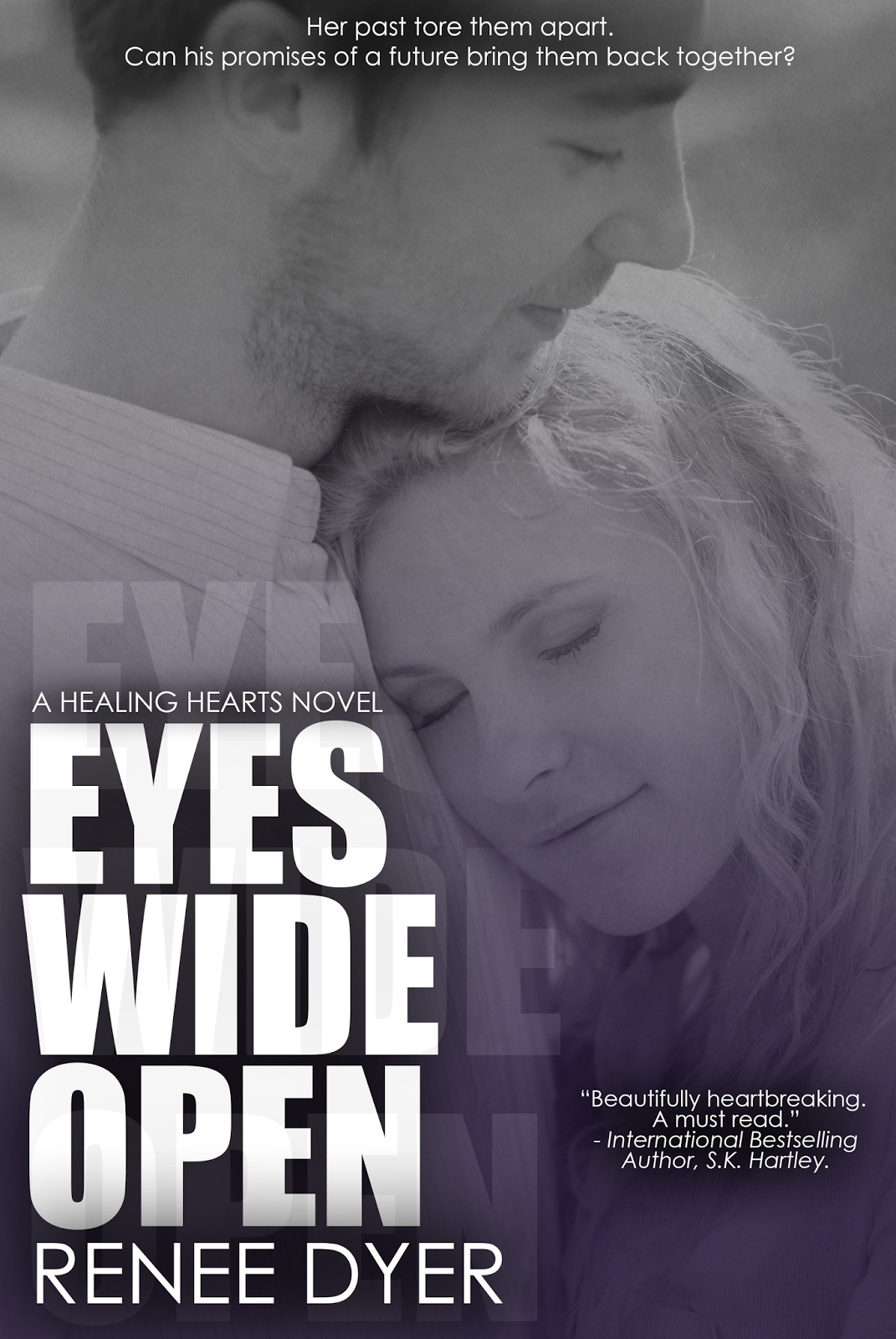 Adriana Monroe had her life planned out.  She was going to marry Alex, have a house full of kids, and spend as much time as possible with their friends.  But, life had other plans.  Life stole Alex from her and Adriana grieved his loss so badly, when she had the chance to love again with Tucker Stavros, she couldn’t do it.  She was broken and felt her love for Alex would break Tucker, too.  So, she walked away.

Now, her heart is shattered and she’s mourning the loss of both men.

Tucker Stavros has lived his life looking for love.  After losing his mom at a young age and being abandoned by his dad, the only love he’s known is from his Grams.  His relationships have been disasters.  He’s never felt that spark… until he met Adriana Monroe.  Everything changed for him the second he saw her smile.  He didn’t care that she was grieving.  He didn’t care that she was broken.  He saw himself in her lost eyes.  He would have done anything to make her his.  Just when he thought they were becoming something special, she walked out of his life, crushing his heart.

Now, he’s alone, afraid he’ll never find anyone that makes him feel the way he felt for her.

Tragedy strikes and Tucker and Adriana find themselves thrown together once more.  Will she continue to protect him by staying away, or will she find that her heart will take what it wants?  Will Tucker shy away from her, or will he run to her and show her why they belong together?  Will they hide from each other, or will they walk into the unknown with their Eyes Wide Open knowing that in order to heal, you have to first be broken? 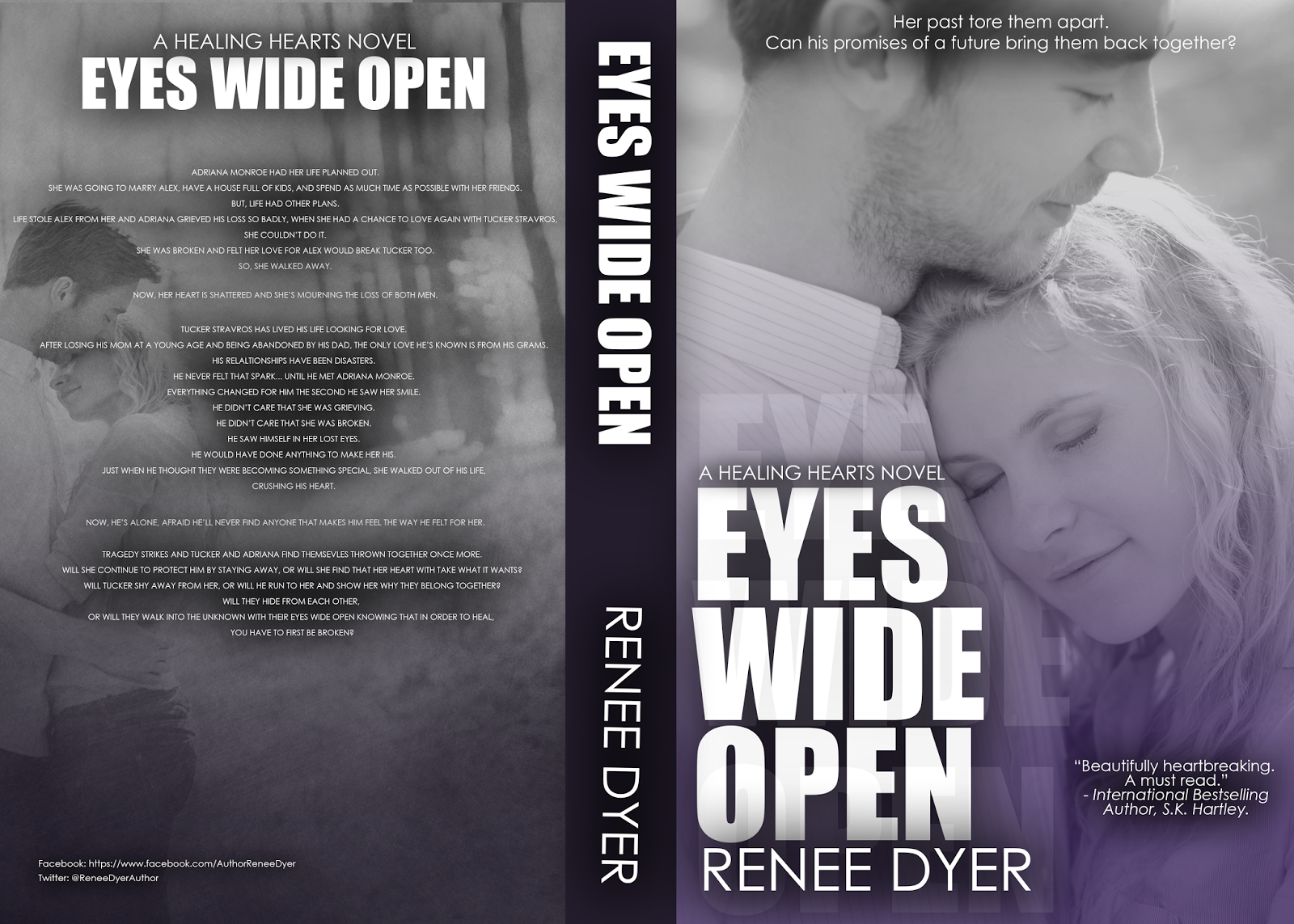 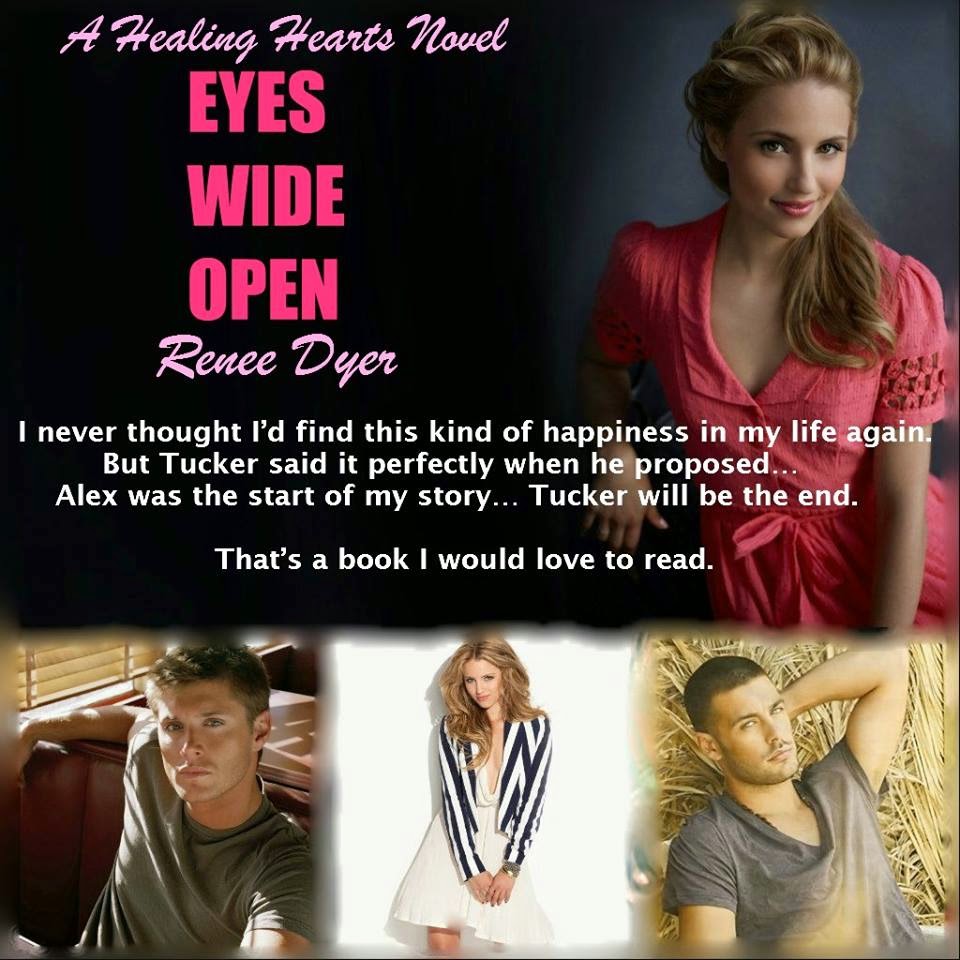 In all honesty, I didn't go in reading Eyes Wide Open with excitement. I started the first book, Waking Up and was a little disappointed with the grammar and layout, so I skipped chapters and shot to the end so I could start book two. By the third chapter, I was so confused I had to go back and finish book one properly and - guess what? I got engrossed in the story.

Keeping in mind that I was reading ARCs, I restarted the second novel and began to truly feel for the characters. Adriana (who seemed bipolar to me at first) finally showed her completely broken self and became a woman I could understand and like. Despite everything she'd been through, she could still show compassion to people who tried to make a mess of her life. This woman is a true friend.

Tucker (whose full name I found really unwieldy at the start, but then it grew on me) was someone who I could picture as an extremely handsome actor who plays a vampire on TV and possesses a pair of piercing blue eyes. I'm not naming who I imagine but I could bet we're thinking of the same man! His character, however, had a life worthy of a prime time drama series and his unwieldy name perfectly portrayed the juxtaposition of an extremely private man leading a very public life. It doesn't match but it can be made to work. I also don't think there is any man alive that could be like this but, hey. It's the author's imagination and I like where she went.

The supporting cast makes it all more alive. I love Adriana's group of friends and I would say that having a bestie like Mick would be extremely interesting! This is a terrific support group and the way they accepted and adopted Tucker as one of their own tugged at my heart strings.

Eyes Wide Open just sucked me in. I could picture almost every part of the novel and I had Somebody playing on repeat for most of the day. It was just all so alive. Amid all the deaths, tragedies, and betrayal, there is still goodness and love waiting for everyone. It's a Pollyanna theory but no less beautiful for being such.

I hate you, Renee Dyer. Not only did you pull me through Eyes Wide Open kicking and screaming, but you made Preston make me cry, AND gave me a whole slew of new books to read! I hate you.

When is your next novel coming out? 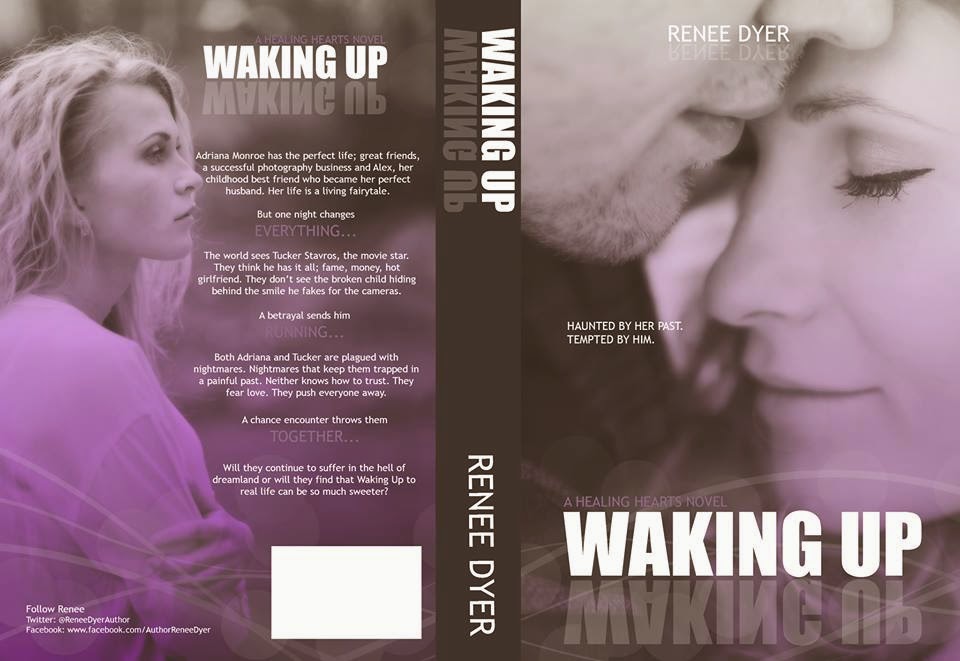 
For Adriana Monroe life couldn’t get any better.  She has great friends, her photography business is booming and she married Alex, her childhood best friend.  Life is perfect.  It’s a fairy tale really.
But one night changes everything for her.
Suddenly she’s alone.  She’s afraid to trust and afraid to love.  Most of all she’s afraid she’s broken beyond repair.  Nightmares torment and haunt her every time she closes her eyes.
Will she ever be the same?
For Tucker Stavros it looks to the outside world like things come easy for him.  He’s gorgeous, rich, famous, has a hot girlfriend.  Hell, he’s a movie star.  If women aren’t trying to get with him then men are wishing they are him.  What they don’t see is the broken child hiding behind the smiles he fakes for the cameras.  They don’t see the man who wakes up drenched in sweat from his nightmares from a past he can’t escape.
Betrayal sends him running.
A chance encounter throws Tucker and Adriana together.  They try to fight their attraction for each other.  They feel they’re too broken for the other.
Will they continue to suffer in the hell of dreamland separately or will they find that Waking Up to real life together can be so much sweeter?