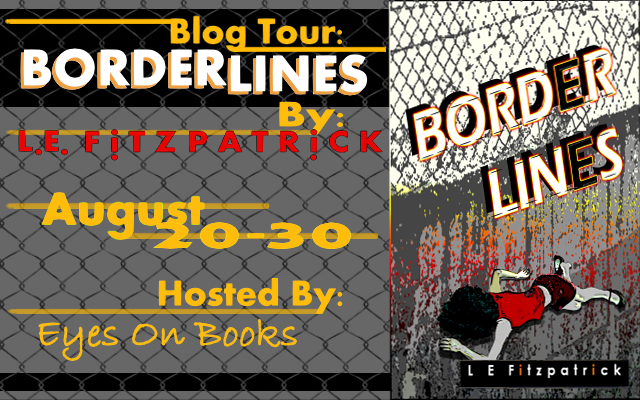 L E Fitzpatrick was born in Hull, East Yorkshire, but now lives in West Wales, with her family plus lots of dogs and cats. She manages an office, volunteers as a room steward for the National Trust and also supports independent authors as a proofreader and beta reader. She obviously has no spare time because of this, but if she did it would probably be invested in walking in the countryside and enjoying the peace and quiet.
L E Fitzpatrick published her first series Dark Waters in 2011 and is currently working on her Reacher series. 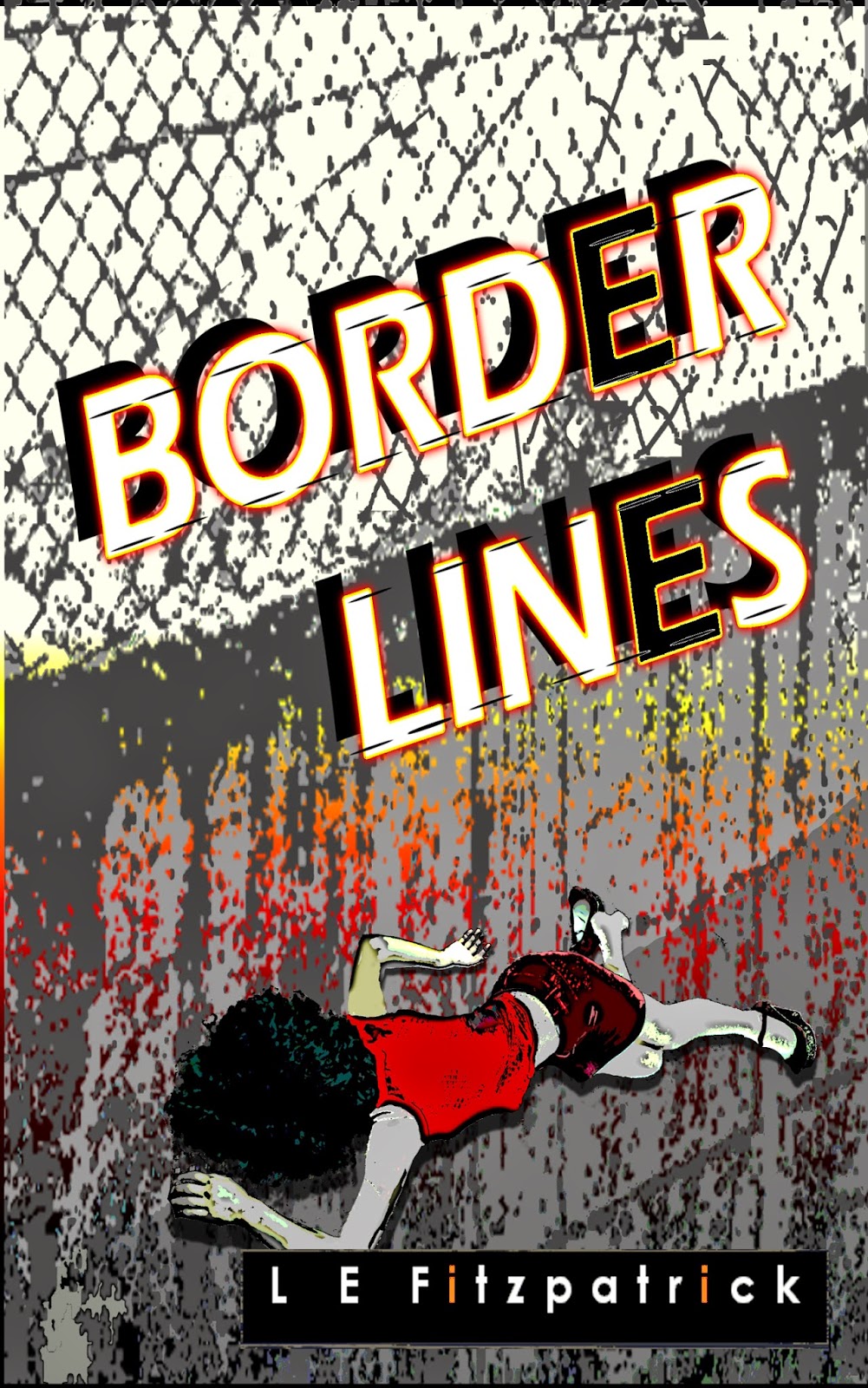 "We all remember that kid in Piccadilly. That determined look he had on his face as he willed all those people to him. Just using his mind he pulled them close then blew them all to pieces. It could be anyone. Your neighbor, your friend, your lover. Remain vigilant. Reachers are everywhere."
When the perfect job comes up Charlie doesn't think twice about taking it. This is the break he's been looking for and nobody, not even the rest of his team, can persuade him otherwise.
The job means working for an old enemy and crossing the border into London. Both are risky but Charlie has no idea how high the stakes really are.
The team will have to confront their past, each other and a killer who is closer than they realize. But can they all make it out of the city alive?
This is the second installment in the Reacher series.

Border Lines reached me quite a few months after The Running Games and I thought I'd have to go back and review the first installment, just to refresh myself. I'm so glad that I was wrong! L E Fitzpatrick has a gift for getting your head right back to where the previous novel ended and you're into this dystopian world without a problem at all.

The Smith brothers and their newly-adopted sister Rachel are still on the run, not just because of a string of murders and thefts left in their wake, but also because of who they are - Reachers, people with paranormal powers.

Charlie gets word that Father Darcy is looking for them and drops everything to meet him. Despite Darcy selling Rachel's sister years before, he still has that smidgen of trust for him. But, they find Darcy almost dead, themselves trapped in a ramshackle old church, and unknown to them, in the sights of renegade Reachers out for blood.

In order to survive, they have to take a job that brings them across the border of Safe Haven and into London. What they find and what they have to do is beyond what any of them expected.

These characters, Charlie, John, Rachel, and Roxy get under your skin and become alive. You can feel Charlie's struggles to stay sober and want to hit him upside the head when he gets tempted. John is still an enigma to me but his mood swings are understandable. After all, he has to live with Charlie and rescue him when necessary. Rachel is the most human of all but her sympathy for mankind (well, she IS a doctor) is what gets her into trouble. And then there is Roxy; maudlin, opportunistic, and charming. Yet all together, this ragtag family puts the police into a tailspin so fast nobody knows what hit them.

Yet this group of almost superhumans is in danger from several different forces and has to avoid them while completing their job if they want to survive. Mission impossible? Now that group of super spies has nothing on them. The
Reachers are raw action and not above getting themselves hurt or others killed to finish their task. There is no fear in any of them, except for each other.

It's a beautifully crafted, non-stop exciting, futuristic novel that stops almost too quickly. The cliffhanger here is a fraction from being too much, with the lives of several of the main characters hanging in the balance. You've got an enormous "WHAT?!?" reverberating in your brain.

Border Lines left me turning the pages in the search for more. Bravo, L E Fitzpatrick!

A barbwire fence scars the south of England – London's poverty proof vest, protecting her from S'aven's desperation. In case the fence wasn't enough, a concrete wall was erected and patrolled with armed soldiers trained to shoot on sight. It didn't matter who came over that fence, they never made it to the wall.
People crossed over through the gates and even then that was never a guarantee. You could leave London whenever you wanted, entry to S'aven was always free, but it came with risks. If you lost your wallet, or your ID, or if the border watch didn't like the look of you, getting back in could take days, even weeks.
During the day queues of cars waited to be admitted to the city. Movement was always slow, but by the evening the commuting traffic relaxed and the wait was usually only an hour or so. 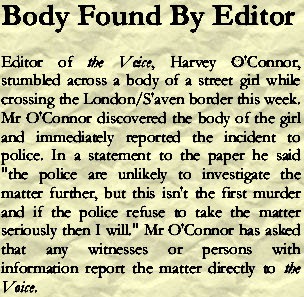 However long it took the greeting was always the same. Border watch stopped each car, surveying it with suspicion before checking the passes of the passengers. Babies to pensioners were inspected, their ID's scanned and if the border patrol took offence they'd even strip search you.
Rachel rapped her knuckles on the passenger seat as the car ahead of them started to move forward. This was closer than she had ever dared go to the border. There were stories about guards having scanners that picked up Reachers, even if that was a lie it still left her fake ID and the boot full of weapons to worry about. The urge to use her powers was overwhelming, but Charlie insisted they get through legitimately.
She glanced at John as he drove forward. He was focused, but unconcerned with the task at hand. The brothers were used to crossing the border. They'd seen what it was like on the other side. She hadn't even seen through the gates. The world she was used to was the one they were parked in – dirty, decaying, depressing. What could be hiding behind that concrete wall? How good was it on the other side?
It was their turn. Rachel followed John and Charlie's lead, placing their hands on the dashboard and the front seat. Three border police circled their car. One ducked down to see underneath and, satisfied, they gestured that John slowly open the window.
"Passes," the man ordered, shuffling his rifle back onto his shoulder.
Rachel handed the three fake passes to John, her heart racing. John handed them to one watchman to process while another began his interrogation.
"Is this your first visit to London?" 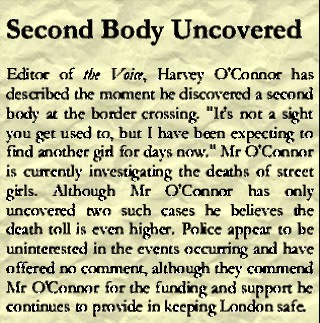 "No," John replied with impatience.
"What's the purpose of your visit?"
"Business," John stated coolly. Rachel wanted to slap him – he was going to get them all killed.
"Your employer."
With a sigh he said, "Delta Gray Limited. We have an apartment in the Grange, and we'll be here for two weeks. Check in is in less than two hours, can we speed this up?"
It was the name of the hotel that perked his interest. "The Grange is expecting you? All three of you?" He didn't wait for an answer. He backed away from the car to his secure booth to check what the computers had found.
Confident, John closed his window.
"The Grange?" Charlie called from the back. "You didn't think something a bit cheaper would be a good idea?"
John shrugged. "I'm not forcing you to stay with us."
The men continued to watch them.
"What's wrong?" Rachel asked nervously.
"Nothing, they're just trying to work out the toll they're going to charge us."
"Toll?"
"There's a standard charge to enter London but it's at the discretion of the border watch. Now Mr–I've–Got–Cash–To–Burn here has said we're staying at the Grange they know we can afford additional charges."
"Bullshit," John snapped. "They know we mean business and they'll process us quickly. They charge everyone additional charges." Rachel swallowed and glanced away. They were coming back.
The policeman tapped on the window again. "Hundred to pass," he said.
"Last month it was sixty," John growled.
Rachel cowered back in the chair, she couldn't believe it – he was fucking haggling! It took every ounce of control not to reach out and strangle him.
"Rates have gone up."
"Seventy," John replied.
The watchman hesitated. "Eighty."
John conceded. "Fine, but I want a receipt."
And that delayed them another ten minutes while they wrote it up.

Her father called it the running game. Count the exits, calculate the routes. Always be ready to run because they’ll always be coming for you. Whatever happens, they’ll always be coming for you.Rachel had let her guard down and they had found her. She could run now, leave the city and try her luck beyond the borders, but with no money and a dark secret to hide her chances of survival are slim.But then she meets two brothers with a dangerous past and secrets of their own. Can they help her turn the game around?This is the first installment of the Reacher series. Set in a grim and not too distant future, this urban thriller will keep you hooked until the last page.