eARC Review: Names Can Never Hurt Me by Wade Kelly 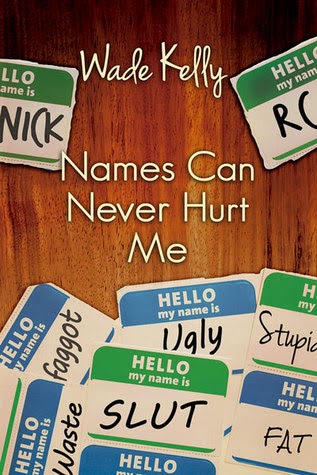 What if sexuality wasn’t a definable thing and labels merely got in the way?


Nick Jones can’t remember a time when he wasn’t part of the in crowd. Everywhere he goes, he stands out as the best looking guy in the room, and women practically fall into bed with him. Then, after kissing Corey on a dare led much more and on many occasions, Nick’s “screw anything” reputation escalated, but he didn’t care.
When Nick meets RC at the restaurant where he works, it throws his whole life out of whack. Overweight, always sweaty, gay, and hairy like a bear, RC lives up to his dubbed nickname “Scruffy Dude.” He seems Nick’s complete opposite, but Nick can’t get him out of his head.
Because of peer-pressure and his fears about defining his sexuality, Nick struggles with stepping out of his comfort zone and caring about someone different than himself. If he’s lucky, somewhere between arrogance and ignorance, Nick might find out what it means to be an adult, but if he’s wrong, he could lose everything.

What can I say but: Wade Kelly did it again!

Names Can Never Hurt Me is a title that sets the readers' minds to think. The cover image is disturbing for these are some of the most common and worst mean words to be ever said in disdain and intolerance to anyone. The words on that cover are those that bullies use as punctuation marks and they hurt. So how could someone say they could not be hurt by these?

Nick is a beautiful man and he knows it. In fact, he is one of those whose attitude may be clearly seen and heard as: God's Gift To Human Kind. Obnoxious really and once I saw this character as the main leading man of Ms Kelly's latest work, let me just say that it was a  daunting thought!

Then there is RC - the initial and the name. What do these stand for? Why is RC hiding behind the initials? Yes, he is scruffy and labelled so by one of Nick's friends and yet, how come Nick cannot take his eyes off of him - acne and all? What is it about RC that makes Nick's heart tick the right tock?

This is such a beautiful story of love, companionship, getting to know oneself and maturation. Nick's growing up process was filled with face palm events and I did hurt myself several times doing so but they were ridiculously real! His being an unlikable man made him adorable for some reason and I just found myself rooting for this loveable idiot. (But you need to read the how of this by - well, READING!)

I lost count of how many times Nick irritated me and yet I knew he had redeeming factors and it was a fantastic journey of learning he had to go through. Thanks to RC who quietly made such an impact on his life and a mother whose unconditional love for her son - and patience - was such a delight to read.

As for RC? He started off as an enigma and was very difficult to read as a character. Honestly, I found myself labelling him, too (that was bad of me), but I needed to find out how come he was Nick's choice and would they suit?

For some reason, the two men just suited each other and they were so right for each other - it hurt! These two were beautiful to read and although the process was not very romantic, it still turned out to be one of the best romantic reads I have ever read from Wade Kelly.

Think comedy of errors and the misery of rejection coupled with the sure romance of a happily ever after. No wonder names could never hurt these two - they both had each other for richer, for poorer. Forever.

Thank you Ms Wade! You made me tear up - thanks to the many face palms - and made me laugh out loud at the outrageousness that is Nick.

Well, readers: Beware. You will fall in love with the most unlikeliest of heroes.

And yes, Ms Wade: you wrote a beautiful good book :D Nobody Does It Better. Love ya! -JP