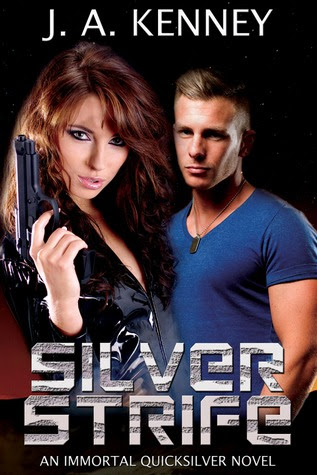 Quicksilver is an ancient immortal warrior. One of a group of alien beings that were once pure energy, living in the void between galaxies, and who have taken mortal form to influence history.
The Purists, compelled by a zealot prophet, are immortal extremists who will use any means at their disposal to wipe out all mortal life. Qui and her Conservationist brethren have spent millions of years fighting for their survival.
In Silver Strife, Quicksilver has been reincarnated on an Earth devastated by centuries of planet-wide civil war. She awakens in the body of a human Elite named Lini: one of a race of superhumans, bred and trained by a Purist-led government to massacre the remnants of humanity. Quicksilver joins the rebel forces, despite their reluctance to trust a hated Elite, determined to take down the brutal dictatorship that has decimated the human race.
From their first meeting, she is drawn to Captain David Mitchell, the rebel officer who aided her escape from the Elite's gilded cage. Even after swearing to never love again when her last mortal lover was killed saving her life, she finds herself falling for the honorable and driven soldier.
When Quicksilver crosses the path of an immortal ally on a top-secret mission behind enemy lines, a decision is forced upon her. She must choose between the fate of the human rebels, her mortal lover, and fulfilling her Conservationist oath to protect all mortal life.


Silver Strife is a novel that drew me in because of the unique premise that J.A. Kenney had dreamt up. It's not that unique in the sense of an alien being that is pure energy dictating the direction of all life in the universe, but to be a whole race willing to take mortal form and fight for their beliefs is a whole different recipe. It's a more Asian/Ancient Greek blend of mythology and the way it's put into action takes it in a whole new direction.

Quicksilver, in this current life, is reincarnated as Lini Petrova, who is, ironically, an Elite who stands  for everything the Conservationists refute and a direct descendant of the being who conceptualized the Purists.

Her chance to fight for her beliefs come when Rebels storm her school and take her prisoner. After convincing them that she's a perfect way into the Purist stronghold, and falling in love with David, the son of the Rebel leader, she loses no time formulating plans to topple the Elite once again.

There is a twist to Quicksilver and her (his? since they have no gender, so to speak, I'm not sure how to address this and "it" doesn't seem right at all) kind being Immortals. They aren't Immortals as classically understood, but a race of energy beings who transcend time and space and are constantly reborn in different human forms, retaining the memories and knowledge of all their previous lives in the past or future. Since they don't get reborn in chronological order, their lives can get confusing for those who share their memories; however being pure energy, it doesn't matter to them at all.

Everything was nicely tied up for me except for one thing: Star's sudden appearance in the story. She just shows up, gets recognized by Qui, and David knows her. Yet there is no mention of her in earlier chapters. I understood that David shared most of Qui's memories but even a fast flashback would have been nice.

The ending isn't what I expected. It's not boxed up or cut and dried, and even if Qui is an all-powerful being, it's clear to see she has no control whatsoever when and where she will show up next. This is a perfect cliffhanger in itself and a terrific way to whet the reader's appetite for the next installment.

Silver Strife is a wonderful beginning to a brand-new science fiction series and I am impatient to see what J.A. Kenney will do with what is to follow, especially since it's not chronological to this novel in any way. Nicely done!