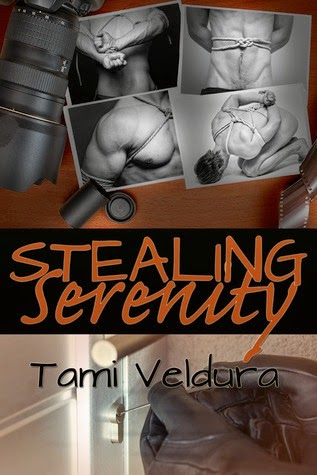 
“Serenity,” a photograph worth four million dollars, was sold at auction to an anonymous bidder. Stealing it will represent the largest payday Daniel will have ever had. To make that happen, he poses as a photography curator to attract the attention of Kearin, the auction house owner.
Kearin takes Daniel under his wing to work in the non-profit branch of his business, but it’s a cover for his desire to see Daniel naked, bound, and needy for the camera. Kearin has a client interested in a very specific portfolio—filling the request would put him at the top of his field.
Daniel thinks he can use the modeling to get closer to “Serenity.” What he doesn't expect is to fall for Kearin's brand of intensity instead. So does he go for the photograph or Kearin's heart? He wouldn't call himself a master thief if he couldn't steal both.

I love a good story.

I particularly love a great story where the mind is made to imagine all the possibilities it is teased with.

I especially love a beautifully written story where there is no need to read the angst of drama within a beautifully developing romance that is not, and most especially one that is truly sweet and calm. This is Stealing Serenity.

Serenity is one of the world's most expensive and sought after piece of photographic art. Sold at an auction, bought anonymously, it is a temptation that beckons. And beckon it did to Daniel. He is a master thief and getting his hands on this piece of art would mean a whole lot of money and a whole lot of risk.

Kearin takes one look at Daniel and does something unexpected: he hires him to be one of his auction house's curators. He did this with a secret intention no one had an inkling of. All Daniel knew was that he was in and closer to his prize. As for Kearin, he knew he had what he wanted. The final piece to his secret creation.

Now all Daniel had to do was strike a pose and be bound.

The unexpectedness of feeling serene while bound in artfully knotted rope steals Daniel's breath away. And Kearin's heart.

For those of you who are looking for a read that captures the imagination and titilliates the creative mind, this is the right read.