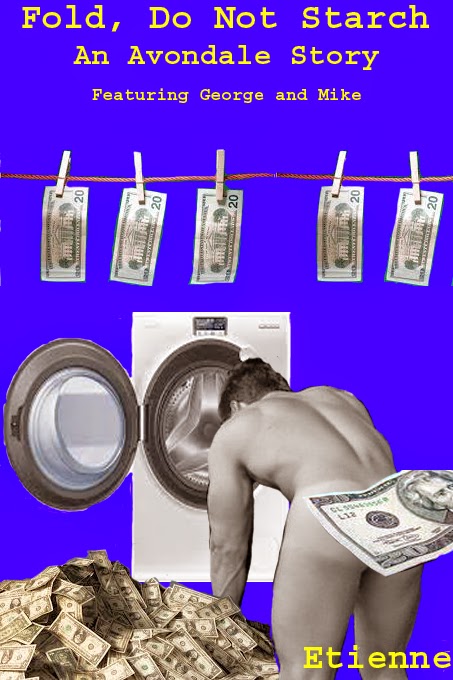 Fold, Do Not Starch
by Etienne
Smashswords, Amazon
25% discount coupon to use at checkout:  XJ35M

Captain George Martin, with the occasional help of his partner Mike Foster, has handled many difficult cases during his career in law enforcement. When an employee of one of Mike’s clients reaches out to them for help, they find themselves immersed in the complex world of money-laundering. George launches an investigation that ultimately exposes a money-laundering enterprise that is national in scope.

Meanwhile, the Sheriff is planning yet another reorganization of the department, one that will mean a promotion for George, but will make it difficult for him to have the hands-on experience with cases that he’s accustomed to.

Just when he thought his plate was as full as it could possibly be, someone from his past rings his doorbell one evening, and his and Mike’s lives are transformed once again.


It felt like forever but finally: I got my hands on Fold, Do Not Starch. This is an Avondale story from Etienne featuring two of my favorite characters from my favorite series, George and Mike. It's been a while since I last heard from these men.

This latest installment opens with George and Mike finally settling down and probably given up on the prospect of an early retirement. They and their adopted son, Robbie, have sort of settled into domestic bliss and are just living and working through their life day by day. Then George stumbles into a seemingly small time case. As he and his people start to slowly build their case, they realize that money laundering is just the tip of the proverbial iceberg. This was big and gradually turning into a nightmare. They may have to call in the FBI.  Again!

Focusing on his never ending paper work, George, as Captain, shows his ability to not only be in charge but be a leader. Unknown yet to him, his life will be changed for the better once the Sheriff gets done with the reorganization of his dreams. Getting a promotion may mean more time with his family but George will also have to deal with more paperwork.

As their family settles and the most complication George and Mike could think of was how to raise a child prodigy in Robbie, George's past unexpectedly intrudes and brings along with it an unknown factor. Suddenly, George and Mike find themselves, once more, deep within familiar territory of having somebody new in their lives and both of them have just have to deal with it.

It's been so long and I had been wondering if I'd seen the last of these two men. Apparently, I was not the only one dreaming of another story.

So what is new to this book?

Well, George and Mike are still as loving to each other as always, Thor is still that incredible beauty and protector, and Robbie is growing up. Robbie especially is seeing great changes in his life, some sad but mostly good especially regarding his musical talent. The department George heads is still doing its thing and better than most. Really, it is just a daily life story for these men.

It is when the new case gets introduced that the talent of Etienne comes to the fore. Once more, there is the intrigue and mystery of a case and as it slowly unfolds, it gets a bit complicated. As the investigative process does what it does, I never really got a glimpse of how it would all end. I do know it would get solved somewhere along the way but it kept me guessing the whole time and I never really thought up any solutions.

The unexpected turn of events in George's and Mike's life came out of nowhere and yet, it managed to not only close a lot of loose ends from the previous books but it also managed to open newer possibilities. I thank the author for finally closing that chapter but also am a bit frustrated for I now am starting to dream of more adventures from these two! I do so love Fold, but instead of settling me, I find myself impatient for more and I can't help but be frustrated for when the next stories would be published!

So yes, I definitely fell in love with Georg and Mike. Again.

Disclaimer: I served as beta reader for Fold so it does have a special place in my heart. Thank you, Etienne! I love George and Mike even more... Now, if only I can have more of them and their friends? :D

Posted by multitaskingmomma at 7:20 PM