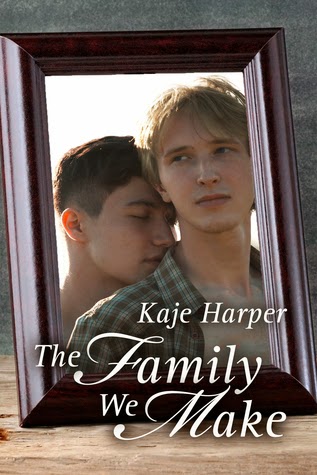 At seventeen, Rick Albright left his home, his parents and even his old name, rather than pretend to be straight. But being on his own was hard. When his big brother Sam found him, and insisted on giving him a place to stay, he didn't resist too long. Living with Sam is better than fighting just to survive, but it's not easy to find his balance in a simple, small-town life, after his time on the streets.
Travis Brinkerhoff finally managed to come out in college, his second year anyway. It was the one bright side to losing his baseball scholarship and jock status. But without money for tuition, second year came to an abrupt end. He's back in his small Minnesota hometown, and back in the closet. Travis feels like he's trying to fit back into a life he's outgrown. If he's going to survive, he has to figure out a way to be his own man, maybe even have his own man, without losing the family he loves.
When he left the Marines, Sam Albright wanted nothing more than to find his missing younger brother. Mission accomplished. Now he's got an independent, possibly traumatized, openly gay young man on his hands, a fiancée in a war zone overseas, and parents he has to lie to in order to keep the peace. Keeping it all together won't be easy, but Sam has never backed away from a challenge.

This book opens to where The Family We're Born With closed. The usual suspects introduced in the first book are here, and all the better for it. When Sam Albright finally finds his younger brother, Clint, he has all thoughts of how to set things right between his adoptive parents and their natural son. But thoughts and plans do not necessarily follow the path and instead, can divert into a totally different road, to some place more challenging.

Clint, now Rick, was an out and proud gay but this was not a 'behavior' his parents wanted. At sixteen, he runs away from home thinking he could get a better life away from their judging eyes and minds. Then again, life had other plans and instead of going the straight and narrow path, Rick encounters one that diverges into so many directions he never even dreamed to go. Now Sam is here. He had been through hell and Sam finding him and never giving up on him, may just be the answer and sure guide that he needs.

New to this story is Travis. A promising young man, he loses his scholarship in college and eventually, had to quit school because of the lack of funds. Something that is getting more and more common these days. To top it off, his having to move back to his parents' house meant he had to conform to his family's and community's norms like going back deep into the closet. His parents' financial and spiritual woes are piling up, he cannot afford to make them worry more. Once more, life gets in the way, throwing him into a path he was not willing to face and dealing with it may not be an action he could willingly do.

When Travis and Rick fall in love, they had one person they knew who would back them up, no matter what: Sam.

This was such a beautiful read, especially as the first book opened all the right doors to pave the way for this one. True, that first book may have not prepared me, specifically, for how life turned the tables on these young men, but it definitely was enough. The strength these men gain from loving and supporting each other is a strength learned and earned. Together they can face what unexpected and unwanted surprises life will throw their way. They are, after all, a family created by need.

Three men's lives here are converging around their families. Some are not so willing, some are not so open, and some are just very accepting. What these three young men have to do is live their lives where it takes them, and in the process, make their own family, because "Real family doesn’t let go when it gets a little ugly."

Posted by multitaskingmomma at 3:26 AM