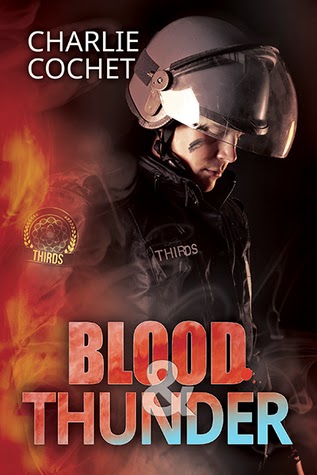 When a series of bombs go off in a Therian youth center, injuring members of THIRDS Team Destructive Delta, and causing a rift between agents Dexter J. Daley and Sloane Brodie, peace seems unattainable. Especially when a new and frightening group, the Order of Adrasteia, appears to always be a step ahead. With panic and intolerance spreading and streets becoming littered with the Order’s propaganda, hostility between Humans and Therians grows daily. Dex and Sloane, along with the rest of the team, are determined to take down the Order and restore peace, not to mention settle a personal score. But the deeper the team investigates the bombings, the more they believe there’s a more sinister motive than a desire to shed blood and spread chaos.
Discovering the frightful truth behind the Order’s intent forces Sloane to confront secrets from a past he thought he’d left behind for good, a past that could not only destroy him and his career, but also the reputation of the organization that made him all he is today. Now more than ever, Dex and Sloane need each other, and, along with trust, the strength of their bond will mean the difference between justice and all-out war.

Blood & Thunder opens where Hell & High Water closed. When a first gen Third agent is murdered publicly, viewed all over the world thanks to live television. This is a desperate time for the Thirds for they know they need to find Isaac and destroy what he is creating: a monster faction which aim is to destroy Thirds forever. And that includes all Therians, their families, and their supporters. As the world is slowly going chaotic, the rise of another faction, complicates matters. Now the Thirds have two complications they need to deal with: Isaac's faction and an unknown Therian vigilante group.

Sloane and Dex remain vigilant over the investigative process. They and their team fight against known and unknown enemies and it seems like they were drowning. It gets even worse when Sloane discovers that there are secrets kept that should have been left buried, it's just that Isaac is starting to discover more things ahead of them. How he is doing it is beyond them, but one thing is certain: Isaac is getting closer and the information revealed can be very dangerous.

The stress is getting to Sloane and  Dex and although Dex expresses his anxieties by singing Karaoke, providing comic relief throughout the read, as well as continuously picking on Ash, Sloane seems not able to handle things and is losing his grip on his emotions. Soon Sloane's misery extends itself into their relationship and seems to be actively pushing Dex away. Unfortunately, the longer they are apart, the worse Sloane gets. He needs to face up to the truth: he can't live without Dex.

Although this is a shapeshifter/romance plot, it is not the expected mushy, cheesy, alpha-prime type of book. This is full of action, the strategies thrillingly unfold, the mysteries are getting more complicated and the secrets revealed are getting more astounding. Instead of complicating this book, these just served to enhance it and made it a book impossible to put down.

Now I have to wait it out, till Thirds #3 is released.

Posted by multitaskingmomma at 9:11 PM