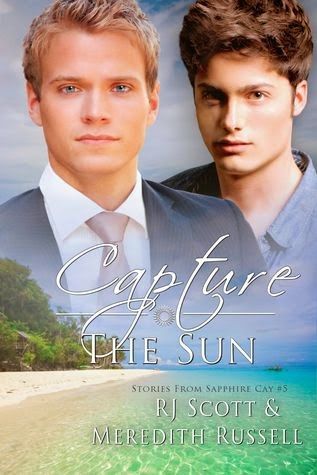 Model, Isaac Bailey wants to break into the world of fashion design. Under his father’s company name, he is set to debut his new collection—summer wear. He has the models, the clothes, what he needs is a location.
Mitch Stone is a trouble shooter. His latest client needs an exotic location and he happens to know someone with the very thing—Sapphire Cay. Having underestimated Isaac as nothing more than an airhead model, Mitch soon discovers there is much more to the young man than he first thought.
As the fashion shoot gets underway, Mitch has to contend with his feelings for his old love, Dylan, and the very new and growing affections he has for Isaac. What starts as just another job, turns out to be more fruitful and exhilarating than winning any multi-million dollar contract.

Note: I have not read any of the Stories From Sapphire Cay series, until this one. I don't know why. I write this review with the full understanding that I may have missed out on some awesome characters, and I did. I will also make sure to get the rest of the books just to satisfy my curiosity that is kicking me in the butt right now....

Capture the Sun is the fifth installment to the series and yet I read it without problems as a stand alone. This is the story of Mitch, the ex of Dylan from  Follow The Sun (Stories from Sapphire Cay #1), who finally gets his chance of finding the man who could settle him. The main fault of Mitch was never letting go of his cellphone and business affairs for his motto was "Career First." Quite understandable for a man on a mission to financial greatness but it is not something that a potential partner would consider a bonus. So here is Mitch, on an island his ex and his ex's fiance is at, dealing with a one night stand who turns out to be his boss' son. How will he make it through?

Isaac is a beautiful man. Beautiful enough to make it as a model and succeed. This beauty is also something that tears his credibility down for who could think that a beauty would have brains to match? Isaac is the perfect BBMT - beauty, brains, monied and talented - but no one really sees him as such. Now he not only has to prove he has a brain, he also has to prove that he could be the man for Mitch.

This was such a sweet romance, especially when Mitch kissed Isaac's worries away. The two men had their own issues to deal with and they did deal with them - together - and that just made me smile happily for them both. This does have a fairy tale feel to it though, so is kind of dreamy. Then again, I think dreamy is good, especially when I fall in love with two men I knew nothing about and made me curious enough to pick up the rest of the series.