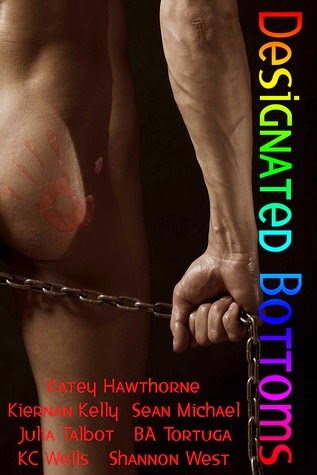 My Rating: 4 of 5 Stars (based on Short&LightRead Category)

Some men are bottoms by birth, others by choice. Whatever the reason, a designated bottom is someone who's happy to surrender, to submit, or just catch instead of pitch!
In Czech Me Out, by BA Tortuga, Korde discovers what it's like to fall for someone when food truck owner Josh takes on the cowboy virgin.
Katey Hawthorne's gamer grad student Paul doesn't date. He keeps things strictly physical. So why is Sammy so important to him in The Mistell?
Kitty shifter and stripper Aleks doesn't mix business with pleasure, but he thinks Rafe might just be the master for him in Julia Talbot's Faster Bobcat.
Sean Michael's Peter isn't sure about the club his friend takes him to, especially when Doms start hitting on him. Experienced Dom Rupert is happy to help, explaining about that Little Square of Cloth.
In Sgt. Hardass, by Shannon West, recent ex-Army man Jake meets up with a man he has history with, and Chad isn't sure he can explain himself and defuse Jake's anger.
In the Prince of Paupers by Kiernan Kelly, Prince Liam and longtime friend Deacon have to go back to Deacon's Appalachian home, much to the prince's dismay.
And in Switching It Up by KC Wells, Jay knows he looks like a twink, but only hunky Dean understands that looks can be seriously deceptive.

I am not one of those who normally goes for anthologies. Mea Culpa! Forgive me...... but how could I resist a book where the names B.A. Tortuga, Julia Talbot, Sean Michael and most of all, K.C. FREAKING!!!! Wells are on the author list!!!??? The others I am familiar with but, I have to be honest: I have not read their books yet..... SORRRY!!!!!!!!!

So yes, I read all of the stories and I must say, this was such a fun read. I actually loved all of them.

The Mistell by Katey Hawthorne is a very modern look to romance. Basically, it happens online, then the protagonists go for a meet-up, they click, they boogie and they fall in love. I especially love the mistell bombs left on the chat lines..... something we can all claim have done at least once in our Facebook lives. Ground open, dive right in, and hope to survive the embarrassment!

Little Square of Cloth by Sean Michael is a very funny peek into the gay man's unspoken language. Who knew that a little piece of cloth of a certain color could be the code that could either rock your world or ruin it? This is a nice take on the 80's Hanky Code and it was hilarious. Thank goodness it ended happily for both men.

Sergeant Hardass by Shannon West. This was sooooooo sweet! It should have been an unhappily ever after story but because of some twist of fate, the two men meet each other on an arranged blind date gone wrong and because they had a history not one of them wanted to let go of, they finally get their HEA. This made me smile the biggest smile!!

Prince of Paupers by Kiernan Kelly is a Cinderfella story. A prince and pauper had grown up together thanks to royal parents who felt they had to contribute to society by making sure that at least one member of a poor family gets a chance at life. Unknowing to them, there is a dragon of a pastor who stole the monies sent and now it is left to the pauper, and prince!, to settle what should have been settled a long time ago. In the process, they slay the dragonand best of all, they finally get their happily ever after. Yes, it is a modern fairy tale, but one that is just the perfect read to go goofy over.