Review: The Last Thing He Needs by J.H. Knight 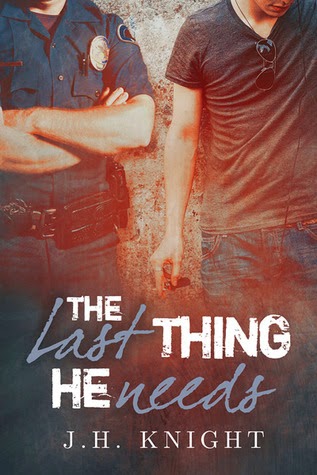 Tommy O’Shea is raising his seven younger brothers and sisters without any help from his drug abusing father and stepmother. Since he was fifteen years old, he's managed to keep the children fed and out of foster care. It takes up every ounce of his energy and the last thing he needs is romance complicating his life further.
Rookie cop Bobby McAlister doesn't belong in Tommy’s harsh world, but Tommy can’t push him out. As their unlikely friendship turns into a tentative relationship, they weather the daily storm of Tommy’s life with a lot of laughs and more than a few arguments.
Tommy isn't used to trusting outsiders, and he's never asked for help in his life. But when a tragedy strikes the O'Shea family and threatens everything he's fought for, he'll have to learn to do both to recover from the brutal hit.

Tommy O'Shea dropped everything, including his life, to support his family. He did this from a young age and swore they would never be apart. When circumstances did separate them and the worst things to happen did happen, he gathered his siblings back together through sheer force of will and made sure to never make a mistake again. Never to rely on others. Never to ask for help.

The last thing he needs is to have a young cop come into his life and heart.

Bobby McAlister swooped into the lives of the O'Shea siblings. He was there as a cop; he was there as a friend. When things looked dim and impossible, he was still there. His perseverance was a guarantee to break down the walls Tommy put up. Slowly but surely, he became the one person Tommy could not live without. That was the last thing Tommy needed, and he resisted with all that he could. But the love and the support was irresistible and it was breaking his walls down.

This is a plot that is quite common - both on text and in real life. The struggles of a family to make ends meet, to skitter around the edges of illegal acts to place food on the table, these are all so real. What makes this different is the way it was written. It was neither too light, nor too heavy, it was just full of realism. But despite all the realism, it did not leave a bad taste in the mouth. Instead, it gave a sense of hope to a seemingly hopeless life.

It took time for Bobby to break down the walls Tommy built through the years and it took time for Tommy to finally admit he did need and he did love. This makes it a very romantic story to read. A very hopeful love story for althought The Last Thing He Needs is love, Tommy and his family could never resist the lure of unconditional love.


Posted by multitaskingmomma at 1:00 AM