Review: Trying Not to Love You (Love's Landscapes) by N.J. Nielsen 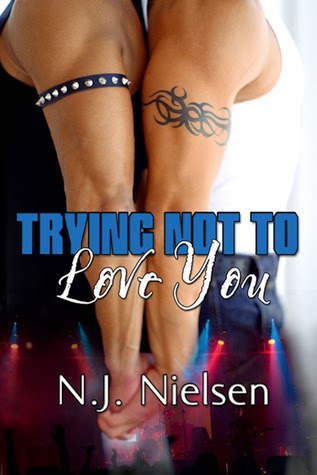 My Rating: 4 of 4 Stars (based on the Short & Light Read Category)

Alistair Krunkstone is happy with his life—he plays bass guitar in a band, has a best friend, a family who loves him unconditionally, and yeah, he has a girlfriend, but he doesn’t want to talk about her.
Keagan Thames has been in love with his best friend since the day they met. When Alistair breaks up with his girlfriend, Keagan takes him in. Being so close but not touching Alastair will be hard enough without the added burden of Alistair’s ex threatening to ruin his life for something he hasn’t done.
With the help from the other members of their band “DeRanged”, family, and friends, everything comes to light. Will the strong bond they’ve always shared be enough to pull them through the awkwardness of their changing relationship? Or will it pull them apart forever?

This story was written as a part of the M/M Romance Group's "Love’s Landscapes" event. Group members were asked to write a story prompt inspired by a photo of their choice. Authors of the group selected a photo and prompt that spoke to them and wrote a short story.

Dear Author,
Who are they? Are they band mates heading home after a gig? Buddies after a long night out? Fans post-concert? Is this the night that changes everything? Or just a night like any other they share? How have they become so comfortable, with themselves, and each other? Is it new and fresh, or solid and steady?

Photo Description:
Two guys asleep on a train one lying on top of the other’s lap. They’re both dressed in torn jeans and T-shirts. One has bluish/green coloured hair. They look to be like they’re in a grunge rock band or possibly are on their way home from a concert. The guy with the coloured hair is using the thigh of the guy lying on him as a pillow. They look comfortable with each other.

This story may contain sexually explicit content and is intended for adult readers. It may contain content that is disagreeable or distressing to some readers. The M/M Romance Group strongly recommends that each reader review the General Information section before each story for story tags as well as for content warnings.


I just love Gay For You stories and this is one of them. Trying Not To Love You is a short freebie that tells the story of two best buddies who watch out for each others' backs since the time one broke his arm after a challenge. Yes, one is younger and the brother of another friend, but their families had bonded tight since the broken arm event and from then on, they were just together. Now that they were adults and members of a popular band, they were closer than ever.

The togetherness of Alistair and Keagan was the norm within the family. When Keagan finally came out as gay, there was no such drama involved and it actually tightened the bond between the two families. When this happened at the time they were already in the public eye, there was no media storm. There was just full acceptance from the fans.

So why all this drama?

Well, for one thing, it does no good when a bitchy, witchy, bitch of a girlfriend suddenly decides to make life miserable for Alistair, Keagan and their families. Threatening threats left and right did not work though, she forgot the families were TIGHT! and had COPS! Then there was the surprise of it all - when Alistair finally realizes his being in love with Keagan was not a secret and his coming out was expected - like, years ago!

This was such a fairy tale romance and I. Just. Loved. It!

Yes, I agree, this is not a plot that would win a Pulitzer, but it is great entertainment, it is romantic and it has enough angst to make it a fluid read. That it is HEA - well, let me just say, it made me smile big. So definitely a recommended read for those who love HEA, GFY, and sexiness. What I want to know is what happens to the brothers????? I wish I may have a follow up read :D

Posted by multitaskingmomma at 10:04 PM