Sue Brown is owned by her dog and two children. When she isn’t following their orders, she can be found at university listening to lecturers discuss long-dead theologians. In her head, however, she’s plotting how to get her cowboys into bed together; she just hopes the lecturer doesn’t ask her any questions.​
Sue discovered M/M erotica at the time she woke up to find two men kissing on her favorite television series. The series was boring; the kissing was not. She may be late to the party, but she’s made up for it since, writing fan fiction until she was brave enough to venture out into the world of original fiction. 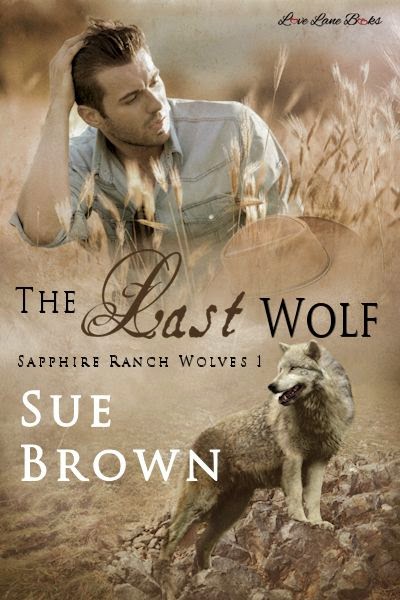 The only good predator is a dead one, as far as Joe Lowther is concerned.
That is until the day he shoots a wolf, only to watch the animal turn into a naked Callum Pope. Cal is being hunted by a group of humans who eradicate shifter packs for sport.

Joe makes a decision to help Cal and discovers a deeper connection with the young shifter. One which he’d like to explore. If they live that long.

Joe is a professor of history but he is also a rancher's son. When his father needed him most, he takes a sabbatical and goes home to care for both ranch and father. What he did not expect was to see a wolf in the middle of Texas. There are no such things as wolves in Texas! Coyotes, yes, but not wolves. So off he goes and hunts the wolf. What happened next was enough to make him withdraw into his logical brain.

Cal is a werewolf running away from hunters who are slowly decimating the shifter world. Separated from the rest of his living family, he stumbles into a ranch in Texas hunting for something to eat and to locate a cousin who may be living nearby. He never expected to get shot and set sight on his mate.

This is a typical shifter paranormal romance we are all used to reading. Yes, there are naked men shifting into beautiful wolves, yes, there are mean hunters looking to massacre a race without thought nor conscience and yes, there is the sexy, sizzling romance that is expected to develop between a shifter and his human. The usual angst, the usual romance.

What is not usual is the way this is written. It gives us the most unexpected characters to rise out from this genre where the supposedly and obviously weakest individual turns out to be the strongest. And the obvious leader is not and should never have been.

Sue Brown is known for her purely romantic stories and she has never failed to entertain and successfully get the heart to thrum in pleasure. This is a lengthy story but it was written in such a way that made it a furiously fast read that it came out short. With a cliffhanger ending, it was enough to drive me insane. However, instead of feeling hummydrummyhohum, it developed a huge craving for MORE! of Joe, Cal and the rest of the gang and that is not good for me. I just love shifter romance and when done as well as this one, it keeps me loving it more.

I am now impatient for that next installment. Truly! IMPATIENT! I really want the next book NOW! (am I shouting?)

“You need a doctor to get the bullet out or the wound will get infected.”

“Wolf. Don’t… need… a doctor.” The boy gasped as he tried to get the words out.

“Don’t be fucking ridiculous. You’ve got a bullet inside you.”

The man sounded so young. Joe looked at him closely for the first time and mentally downgraded him from man to boy. Joe was twenty-eight. This kid looked barely old enough to scratch his own ass, so smooth and slim Joe was pretty sure he could easily span his waist with both his hands.

“We’ve got to get the bullet out or…” Joe didn’t finish the sentence, figuring the boy was smart enough to know what he meant.

The boy flopped weakly back onto the dirt. “It’s already out.”

“Bullet. Out.” He fumbled around by his side.

Confused, Joe pushed the boy’s fingers away and searched in the same area. His fingers closed around a wet, sharp object. Joe squinted at the mangled bullet in his palm. How the hell had the boy managed to get the bullet out?