Best Selling Author Kindle Alexander is an innovative writer, and a genre-crosser who writes classic fantasy, romance, suspense, and erotica in both the male/male and male/female genres. It's always a surprise to see what's coming next!I live in the suburbs of Dallas where it's true, the only thing bigger than an over active imagination, may be women's hair!Usually, I try for funny. Humor is a major part of my life - I love to laugh, and it seems to be the thing I do in most situations - regardless of the situation, but jokes are a tricky deal... I don't want to offend anyone and jokes tend to offend. So instead I'm going to tell you about Kindle.I tragically lost my sixteen year old daughter to a drunk driver. She had just been at home, it was early in the night and I heard the accident happen. I'll never forget that moment. The sirens were immediate and something inside me just knew. I left my house, drove straight to the accident on nothing more than instinct. I got to be there when my little girl died - weirdly, I consider that a true gift from above. She didn't have to be alone.That time in my life was terrible. It's everything you think it would be times about a billion. I love that kid. I loved being her mother and I loved watching her grow into this incredibly beautiful person, both inside and out. She was such a gift to me. To have it all ripped away so suddenly broke me.Her name was Kindle. Honest to goodness - it was her name and she died a few weeks before Amazon released their brand new Kindle ereader. She had no idea it was coming out and she would have finally gotten her name on something! Try finding a ruler with the name Kindle on it.. It never happened.Through the course of that crippling event I was lucky enough to begin to write with a dear friend in the fan fiction world of Facebook. She got me through those dark days with her unwavering support and friendship. There wasn't a time she wasn't there for me. Sometimes together and sometimes by myself, we built a world where Kindle lives and stands for peace, love and harmony. It's its own kind of support group. I know without question I wouldn't be here today without her.Find out more by visiting www.kindlealexander.com or email me at kindle@kindlealexander.com

Deputy United States Marshal Mitch Knox apprehends fugitives for a living. His calm, cool, collected attitude and devastatingly handsome good looks earn him a well-deserved bad boy reputation, both in the field and out. While away on an assignment, he blows off some steam at a notorious Dallas nightclub. Solving the case that has plagued him for months takes a sudden backseat to finding out all there is to know about the gorgeous, shy blond sitting alone at the bar.
Texas State Trooper Cody Turner is moving up the ranks, well on his way to his dream of being a Texas Ranger. While on a two-week mandatory vacation, he plans to relax and help out on his family’s farm. Mitch is the last distraction Cody needs, but the tatted up temptation that walks into the bar and steals his baseball cap is too hard to ignore.
As Mitch’s case gains nationwide attention, how will he convince the sexy state trooper that giving him a chance won’t jeopardize his life’s plan...especially when the evil he’s tracking brings the hate directly to his doorstep, threatening more than just their careers.


Ms Kindle is one of my favorite writers and for a good reason: she is one of those who could spin a romantic tale that refuses to let go of the readers' minds. And hearts. Take for instance the main man in this second installment to the Nice Guys Novels.

This guy has been the subject of the fans' imagination and dreams for so long now, ever since he was introduced in Double Full. Val has called dibs on him but then again, so have I and a whole lot of others who know what he is capable of. Ms Kindle continues to play referee for this  ongoing cat fight :D 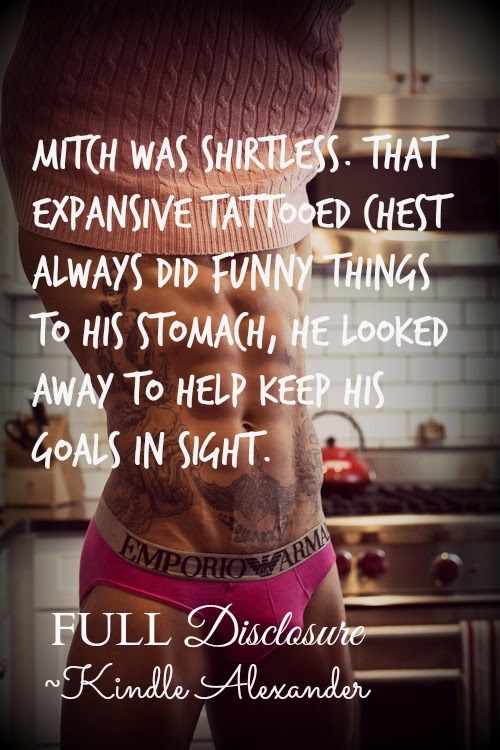 He is a sexy, dangerous hunk called in to help investigate the attempted murder on Colt and now that he has dug his teeth into the case, he finds that there is more to this attempt than previously thought. The problem is, no one is really minding his discoveries and it was disappointing. Trying to take his mind off his frustrations, he goes to a club with friends and meets someone he considered not his type but was the stuff that made his mind and heart go crazy.

Cody is a Texas State Trooper who never really hid his preferences by did not flaunt it either. Sitting in a bar quietly one night, someone he would consider not his typical date not only set his eyes on him and his ball cap but refused to let go of his hand, his mind and his heart. But what should have ended in a good way did not for the guy who called himself Mitch had to rush and leave him for a case.

This story really centers on the case that Mitch worked hard for. He had discovered information that now only were considered important by the FBI when the son of an important political figure meets the same fate Colt did. Now based temporarily in DC, Mitch finally has the chance to close this case but his mind is not focused on it, no thanks to a huge man in a ball cap by the name of Cody. They were miles apart but they could not let each other go. As Mitch juggles his work with his tentative relationship with Cody, the case is going nowhere and the FBI were acting like the Fing they were reputed for. Spending more time over the phone than face to face, the two men slowly but speedily work their relationship to levels both never expected. They two only really had a few moments side by side but these were enough to make them settle. As the case Mitch works on gets nationwide attention, Cody gets targeted. Mitch goes full force to not only save the man he loves, but finally close this case once and for all.

The real delight in this story is how the romance between Cody and Mitch got juggled between their respective careers. It was a difficult time for them but they persevered. Central to this story was really the investigative process that was really frustrating on all levels. True, this installment is not in any way like the drama that Double Full was but then again, that was Colt's and Jace's story. Mitch's and Cody's story is their own. This made me laugh and giggle more than that previous book did and I love how Mitch just managed to wear the most outrageous shirts to poke fun on protocol.

This was such a delight to read for Mitch's ways, his thoughts about his temporary partner, and his rebellion on an institution's code of conduct. Mitch is on the extreme opposite to everything the FBI stood for but he is really proving his worth, his contacts were stellar, and we all get to meet Aaron and Kreed who, we now know, are going to be the main men in A Nice Guys Novel 3, still to come in 2015. Now reading that!!!!! I could just hate Ms Kindle! Truly!

But I don't. And I won't. The authors still have more tales to spin. Only thing is, I wonder how I will sleep knowing what I do now about Aaron and Kreed......

In the meanwhile, I get to gush over Cody and Mitch and dream of their HEA **biggestsmilever!**

Full Disclosure by Kindle Alexander
from
Becca the Bibliophile
on Vimeo.

​
Posted by multitaskingmomma at 2:14 AM