L.J. LaBarthe is a French-Australian woman, who was born during the Witching Hour, just 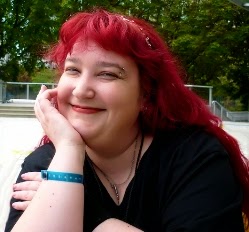 after midnight. From this auspicious beginning, she went on to write a prize-winning short story about Humpty Dumpty wearing an Aussie hat complete with corks dangling from it when she was six years old. From there, she wrote for her high school yearbook, her university newspaper, and, from her early teens to her twenties, produced a fanzine about the local punk rock music scene. She loves music of all kinds and was once a classical pianist; she loves languages and speaks French and English and a teeny-tiny smattering of Mandarin Chinese, which she hopes to relearn properly very soon. She enjoys TV, film, travel, cooking, eating out, abandoned places, urbex, history, and researching.
L.J. loves to read complicated plots and hopes to do complex plot lines justice in her own writing. She writes paranormal, historical, urban fantasy, and contemporary Australian stories, usually m/m romance and featuring m/m erotica.
L.J. lives in the city of Adelaide, and is owned by her cat. She can be found on the Internet at the following places: Twitter: @brbsiberia, Blog | Facebook | Web

Caiden Jones is part-selkie and lives an idyllic life by the sea in South Australia. He’s had his fair share of disappointments, like being kept out of the Navy due to his mythica status, but overall he’s got a pretty good life. Until he’s in the wrong place at the right time.
Cai steps in to subdue an out-of-control minotaur and in the process suffers a serious injury to his ribs. As Cai struggles to breathe, a gorgeous suit-clad sy’lph with mesmerising blue eyes races to his rescue. When it’s learned that the minotaur was poisoned, the sy’lph, Gray, makes it his personal mission to keep Cai and his family safe.
Cai has always harboured some resentment towards the sy’lph because of their easy acceptance into the community, so the attraction he feels for Gray takes him by surprise. But how can they find out what this might mean when the lives of Cai and his family are endangered by someone closer than they realise?

The e-book is available for sale for $5.99 via the BDP Digital Shop
and other online booksellers


Links for Amazon, Apple, All Romance, Barnes & Noble, Kobo etc will be provided when available prior to the release.