I live in a small town in southern Tennessee. Before writing I raised Great Danes and I still do to this day. There is nothing more majestic than a beautiful, giant Dane. Reading and writing has become a huge part of my life and helped me get through a really tuff time in my life. My sister was wrongfully ripped away from this world. Reading and soon writing became my escape from the nightmare that plagued my brain. I will forever believe that my sister pushed me in this direction and for that I will always owe my success to her. She is my whisper away and I know she is guiding me where I need to go:)I am married to my high school sweetheart, Zac and we have two crazy yet beautiful kids together. Between them and the Danes, life in the Hennessy house can be extremely loud and rambunctious at times. But I wouldn't have it any other way. 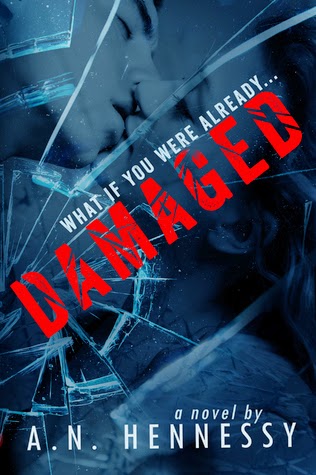 To Averianna Brooks true love is like a mythical creature, it just doesn't exist. Needing an escape from what most would consider a living hell, she leaves the place she has always called home to move to Atlanta where she is determined to rebuild her self-worth with her long time best friend.
Home holds too many bad memories along with a certain person she wishes to never see again. All she wants is a fresh start, a new atmosphere, and a new city away from the horrible times her life once held. In an effort to save herself from any unforeseen pain that she desperately wants to steer clear of, Averi vows against anymore relationships.
But will all that change after a chance meeting with Damian Cole, a well known business mogul to a chain of hotels and resorts with a deviant and damaged past of his own? Unable to stop thinking about his wickedly good looks and his crystal blue eyes, she wonders if she will ever meet him again. When fate brings her slamming into a familiar pair of sapphire eyes, things seems to take a turn, developing into a deep desire that neither one of them saw coming. Can Averi and Damian overcome their hurdles together and repair their damaged pasts enough to fall in love? Or will the past come back to haunt them? They say love conquers all or does it?

Oh I hate you, A.N. Hennessy!!! How could you give Damaged a cliffhanger ending like that? Augh! But, I'm getting ahead of myself.

Averianna is a beautiful, dirty-mouthed woman who's just ended an abusive relationship and moved to another state to recover from it. She's decided to swear off anything that screams commitment to avoid being hurt again. As luck would have it, she bumps into Damien and sparks fly.

Damien refuses to have a relationship with anybody that lasts more than a few nights, if that could be called a relationship at all! Known as a man whore to more than a few, he nevertheless has few problems getting women into his bed, or anywhere else he wants to have them. It's not a wonder he questions where he is going with Averianna.

So what happens when two people from traumatic backgrounds get together? While it's now become a common theme for romance books, this duo makes it a whole lot different, mostly because Averianna fights back despite Damien's alpha male tendencies.

There are those times, however, when I can see echoes and traces of other, very popular series in the story. The good thing is that while they're quite obviously an inspiration, the scenes that follow go off on a totally different tangent, which makes Damaged, while a bit of a fan fiction type, very much its own tale.

Strangely, the character that makes this book really interesting for me isn't Averi or Damien, but Zane, Averianna's twin brother. He is so interesting, being a self-acclaimed man whore combined with a completely twisted, demented sense of humor, and I think he deserves an entire series to himself! I'm not sure how he can make totally gross stuff seem cute, but this man is entirely capable!

Damaged gave me a some hours of escapism and quite a few laughs (thanks, A.N. Hennessy) and a completely bereft feeling when it was finished. I have to know what happens next! And soon!


Not looking up so no one can see my drenched face, I walk through the door. Clumsily, I smash straight into someone. Firm hands grip my upper arms preventing me from falling or else I would have collapsed if not for the unseen stranger.

“Averianna?” The voice is warm and welcoming. A voice I have missed since earlier today when he was being so prudent. “Are you okay? Look at me,” he croons.

“I’m fine, Damian, just need some air.” I shrug out of his grip and walk past him into the slightly cool night air. I sit on a bench to the side of the building as I hear him follow. The tears are still unwelcomingly rolling down my cheeks. I don’t want Damian to see me crying, so I turn my head away from him as he tentatively sits beside me. I can feel anxious blue eyes boring into my back. 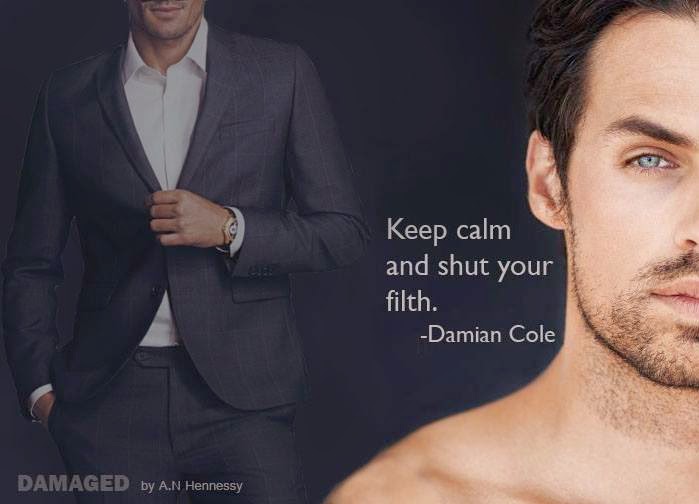 “Look at me Averianna…please.” He reaches around discreetly to grab my chin, coaxing my face in his direction. “Shit…what’s wrong? Please don’t cry.” He breathes in deeply, tugging me into his arms. “Is it because of me, did I cause you to cry?” His question sends a shock of pain straight to my heart as my sobbing resumes more forcibly. I remember telling him that I never wanted to see him again. That I couldn’t handle him, but at this very moment I don’t want to be near anyone else. I want him. I want to feel his nearness. I want to be smothered in him and I want to tell him. I want to tell him everything so he can tell me it will all be okay. That he will keep me safe like he did last night. It pissed me off at that moment, but now it’s the comfort that I want to hear.

“Forgive you? Princess, I forgave you the moment you said it. I was the one out of line. I’m sorry. I’m the one who needs to be forgiven. Now, please tell me why you’re crying. Look at me.” He plants his warm hands on my cheeks catching my falling tears of pain. Looking at his beautiful face, I notice that it looks just as pained as my own. His brow is creased with worry, light glimmering off of ebony hair that is flopped messily over his forehead. His narrowed eyes take on a bothered gleam. I can’t hold it back. If there is ever going to be anything between us, no matter what that may be, he has to know everything. Then maybe he will share some of his past with me. But I’m not getting my hopes up.