eARC Review: His Sleeping Beau (Wickedly Ever After #2) by Jess Buffett

Jess Buffett was born and raised in New South Wales, Australia. Jess is a mum of two, married to her high school sweetheart. She is a hopeless romantic who is a huge fan of M/M and M/F romance with a happy ending—anything with hunky men in all their glory, whether they be Shifters, Vampires, Cowboys, or the boy next door. A caffeine addict who shamefully can’t make a decent cup of coffee to save her life, Jess believes in soul mates, happily ever afters, and in love at first sight, but that sometimes people need a second or a third for the brain to catch up. 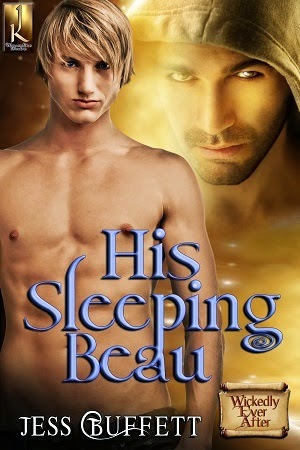 Torn from his family after a curse was placed on him, Zanth Aurelius is not prepared for the trouble headed his way. With new abilities and a protector by his side, Zanth must discover exactly what he is capable of.
When Guardian Liam is sent to collect his charge and bring him home, the last thing he expected was to discover the young, clueless man is also his mate - a mate armed with a sharp tongue and a bat.
With Zanth finally of age he must now return to his rightful place as the leader of his people, but what awaits him may very well be their undoing.

I love Jess Buffet because now I have the biggest grin ever on my face and I cannot forget how absolutely entertaining this read was. It is a fairy tale and it is romantic. It is also full of action, and quite a HOT! little read.

This is a great take on the all-time favorite, Sleeping Beauty but this time, there is no La Jolie to take the full blame and compassion. We have instead, one Malcolm who goes cuckoo when he loses his family. Placing illogical blame on a mage brother who ruled their clan, he falls to the dark side. Soon, violence follow his every step and gaining militant followers along the way. The happily celebrated birth of an heir was too much for his fragile psyche to take, and just like the tale, he is uninvited to the presentation ceremony. The rest is as the tale is told, but this time it is young Zanth who is the beauty, er... beau and his guardian, an erotic older man, is his destined protector and mate.

Zanth is raised innocent of all knowledge and practice of the secret world and his twenty-fifth birthday is looming. Raised by three aunts, he has vague images of a loving mother and none of a father. His life is not that great, as a teacher he only makes it through life. Until one night, when he meets face to face with an intruder who not only orders his safety around, but ends up saving his life from more intruders who are throwing fire at their target: Zanth.

When Liam was made guardian to the young Zanth, he saw the boy as a nuisance but when the boy disappeared, he felt a loss he could not understand. When he finally meets him for the first time in so many years, it was only then he realizes that protectiveness was more than what he actually felt. How to convince the young man to safety is one thing, but to convince him that things are not what they seem is a bit hard. Telling him they were mates, that was just plain impossible.

And so the action starts, the romance brews, and the witches and guardians fight it out. In the middle of it all, an innocent young teacher who cannot comprehend the 'realities' he faces. What he does know: he has fallen for the shifter called Liam, a.k.a. his guardian.

For all those who love fairy tales and HOT! man on man action, this is a light read that checks all the right boxes and is a sure bet to forget about the worries of the real world.