John Simpson is a Vietnam Era Veteran, former Police Officer of the Year, a Federal Agent, a Federal Magistrate, an armed bodyguard to Saudi Royalty, a senior Federal Government executive, and recipient of awards from the Vice President of the United States and the Secretary of Treasury. He has just been hired by an international film production company to become a main script writer, and will start soon on a television series. John feels that for too long fiction writers neglected gay men. John writes entertaining, enjoyable, and enthralling fiction centered on the lives and lifestyles of gay men. John allows his readers to see life through gay mens' eyes. And just like real life, John's characters have active and exciting sex lives. John calls on his broad personal and professional experience in writing gay romance. John is author of numerous full length novels available through Dreamspinner Press and several short stories in Alyson Books anthologies. His first book, Murder Most Gay, is based on the murder of a gay man in Orlando, Florida in 1980, which he investigated along with many others , as anintern from UCF in the legal program . The Orange County State's Attorney's Office utilized his prior experience as a police officer in many ways, including proving a suicide was in fact a homicide. John has now entered the field of movie-making with the upcoming filming of "The Beach House," written by John and being film when funding is in place. Additionally, John has been hired as a screenwriter by an international film company, writing for a television show. He will begin to do most of his work in the film/ screenwriting industry, rather then novels. There may be one more novel forthcoming, but for now, it's on hold. John lives with his partner of 39 years who he legally married in 2008, and their three Scottish Terriers. John is highly involved with the Church, specifically seeking to repair rifts between Christendom and the gay community. John graduated from the University of Central Florida in 1981, and received an S.T.L. in 1995. John wishes to extend a very special thanks to his many female readers. He appreciates and loves the fact women enjoy male /male erotica, and he thanks you for your past and continued support. He hopes to never disappoint you, and always leave you wanting more!
John now has a total of over 40 full length novels in print as well as another 20 novellas and short stories! Five of the novels have been turned into screenplays for the screen: Condor One, Peter's Chair, and Home Sweet Home. (See screenplays for sale section of this website for full list)
Some of the short stories previously published by Alyson Books include: "The Virgin Marine," "The Acropolis of Love," "The Tower," "The Serpent," "Locker Room Heat," "Campus Steam," "Lust in the Sand," and now "Love on the Rocks ," for the "Island Boys," edition. Additionally, he has written numerous articles for various gay and straight magazines. John has five short stories available through Dreamspinner Press: "The Smell of Leather,", "The Sheriff", "Fairy Tale", and the very popular "Officers in Need," and "That's the Ticket." Check them out today! A sixth short story, "Uniform Hardness," which continues the story started in "Officers in Need," is now available through Dreamspinner Press. If these stories don't rock your boat, you're in dry dock!
Contact info: Johnsimpsonbooks@ hotmail.com
Robert Cummings lives in Pennsylvania with his partner and their black lab mix dog. Robert is an Iraqi freedom veteran with a seventeen-year law enforcement career. He enjoys the outdoors, family, and travel. You can keep an eye on his progress or leave feedback at https:// www.facebook.com/ robert.cummi.... You can also contact him at robert.cummings1976@ gmail.com 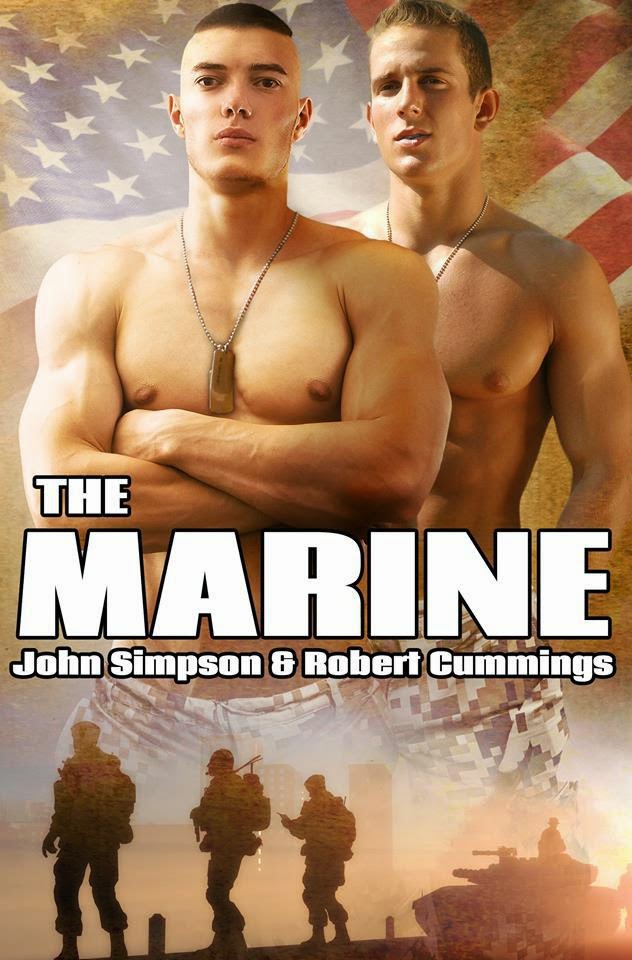 Two young men, David Stauffer and Matthew Kendricks, meet while processing into the Marine Corps for Basic Training. David is immediately attracted to the red haired, Matthew. As their training begins, David pursues Matthew to find out if the attraction is mutual. To his great pleasure, David learns that his attentions are not unwelcomed, but rather feared. Matthew, unlike David isn't as comfortable with his fellow trainees finding out he's gay. As training progresses David proves himself to be superior to the other trainees. As a reward, he is given a short, on post leave and is allowed to take Matthew with him. This allows them a chance to explore each other's bodies, rather than just glimpses in the showers. From that moment the spark between the two burns hot and sets the stage for what is to come. When training ends, questions about their futures arise. Both men are forced to make decisions that will impact their futures, and potentially out them to the entire Marine Corps.

The Marine is another gem from authors John Simpson and  Robert Cummings. This is a story about two young men who, through different circumstances, find themselves going through Basic Training for the Marine Corps. Thanks to the repeal of DADT, men and women, gay or hetero, they could all sign up and be treated as equals. So long as they survive basic training, fend for themselves, be the fighting machines and the expert shooters expected them to be, they are more than welcome.

David comes from a violent household. His father is one of those lowlifes who is constantly drunk and violent and loves to punch and just be plain white stupid. Surviving his father was a life lesson David was not soon to forget and would soon learn to use to his advantage not only to get through life as a civilian but as a potential marine. Although he is small, he is one feisty and cunning fighter. He soon proves his skill  to the trainees and the officers who train them.

Matthew comes from a long line of marines and was not expected to join up but when the laws changed, his family expected him to sign up and so he did. In the process, he leaves his childhood behind and meets someone he never expected to love.

Under the watchful eyes of the instructors and potential team mates, they maneuver their way through the training and the policies. They soon prove to be a mighty duo not only on the field, but in bed.

So yes, this is a fairy tale as only two men could write it but I just love the way Simpson and Cummings manage to make this a simple tale of man meets man , fall in love and live happily ever after in the Marines. The experiences of training is knowledgeably told in the simplest way and yet does not hold back on how challenging the whole thing is. Guts and more guts are displayed to their fullest and even the women joining in are just as tough as tough could be.

So the fairy tale is how the relationship between David and Matthew develop, in the acceptance of the Drill Instructors and the rest of the recruits. More so is the way how they are accepted and not accepted - it is all so unrealistic and yet...

... that is exactly how I thought about the Condor series and the idea of the gay president granting gay rights, repealing DADT and marriage equality. At the time of that writing, it was considered a fairy tale but TODAY!???!!! it is as real as real could be and even if not all things are bliss, the men and women in the armed forces are enjoying life as they should: out in the open.

So yes, once more I say: this is a fairy tale. But it is a fairy tale romance that may just serve as another prediction of what life could be for the LGBT community when it will finally happen. How could we forget the critiques on those previous books that unapologetically projected 'what could be' and now really, really is?

Just one of the reasons why I love the authors.