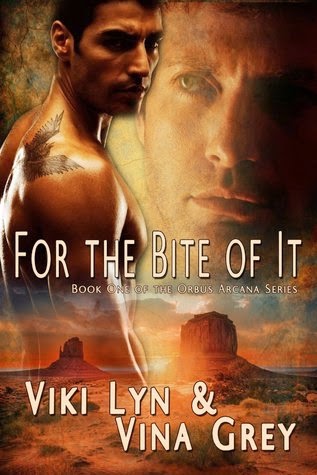 For the Bite of It (Orbus Arcana #1)
by Viki Lyn, Vina Grey
Published March 20th 2014 by Amazon Digital Services


A vampire, a cupcake, plus one sexy cop, is a recipe for trouble.
VINCENT KAMATEROS is an exiled vampire making a routine living as the owner of a cupcake bakery in Arizona. Until a car with a dead driver crashes through the wall of his shop, bringing after it, All-American, closeted cop, JOHN REEDER. Smitten the instant he sees John, but bound to silence by the Vampire High Council, he can never reveal his true self to John.
John Reeder can’t control his attraction to the sexy Italian baker. But as addictive as the sex is, John can't overcome his fear of rejection for being gay, and open his heart to a man with so many secrets. 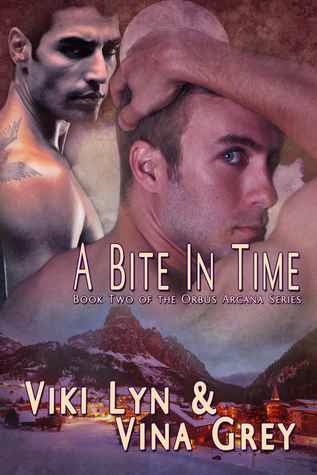 
Book 2 of the Orbus Arcana series.
A dangerous secret, a vampire, plus one sexy cop is a recipe for trouble.
JOHN REEDER has accepted his love for VINCENT KAMATEROS, but he doesn't know his lover is a vampire. When a killer targets Vincent, John has to deal with uncovered secrets that blow his life apart.
Will Vince reveal his true nature to protect the cop who has come to mean more than his own life? In doing so, he might ruin his only chance for a ‘happy ever after’ with John.

When I was asked to review this series I immediately thought: what a delicious blurb! And just like the promise of said blurb, it was a delicious read indeed. I not only loved the cupcakes and the ideas of them, but the vampire world that unfolded? Now that was a delicious idea too.

This is the Orbus Arcana series, story about vampires and the drama of their world. In this world, however, we have Vincent Kamateros, Lord Heir to his father's kingdom, accused and found guilty of killing another vampire, stripped of his powers and exiled from his world hidden from human eyes. It was a human world he now lived in, as a cupcake baker of all things. Then again, it was his only way to forget what he had lost - until a car crashes into his shop and Officer John Reeder walks in.

John is the typical closeted cop and he does not disappoint in his closetedness if there is such a word. Try as he might, he could not resist cupcake nor baker and it does not help that said baker was unusually charming and handsome. There was just something about the man's eyes that glittered his imagination crazy. That he was a tentative suspect to the accident turned murder, it was hard to ignore the man.

As for Vincent, it was difficult to resist the cop of his dreams for this was a relationship that was frowned upon by his world. Then again, his world had him exiled so he could have one, right? Wrong. Apparently, his world is calling him once more to try to put a stop to a supposed rebellion by the other exiled vampires. Should he accept their terms, he could get back his powers and his position as prince but that would mean he has to forget his thoughts of loving a human.

This was such a fantastic read for although the blurb prepares the reader to a formulaic vampire-loving-human-mate plot, it is definitely not that. Yes, there is that plot but it is not the focus of this read. Instead, we have a relationship that would best be described as a star-crossed love affair but because of the murders that keep happening with Vincent in the middle of everything so to speak, this read turns more like an action-suspense-thriller-mystery. Of course there is the romance and it just keeps getting hotter, but it is not in-your-face. The story of the men, their personal and separate lives, their angst and their adventures into the paranormal is a developing plot that does not cease nor stagnate in any way. Each book just adds more to the intrigue of this romance and it just keeps getting better.

Note that this is a series best read in order for the second book opens right after the first one closes and the promise of a third book will open to where the second closes. I cannot wait for that third book especially after having been teased of it.

Recommended for vampire and paranormal lovers who also love cupcakes.

Posted by multitaskingmomma at 12:31 AM