Pre-Release eARC Review, Trailer & #Free eBook #Giveaway: The Half of Us (Family #4) by Cardeno C. 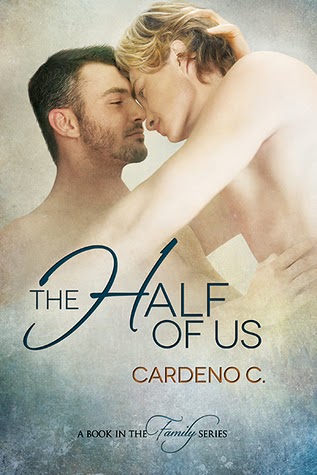 Short-tempered, arrogant heart surgeon Jason Garcia grew up wanting a close-knit family, but believes he ruined those dreams when he broke up his marriage. The benefit of divorce is having as much random sex as he wants, and it's a benefit Jason is exploiting when he meets a sweet, shy man at a bar and convinces him to go home for a no-strings-attached night of fun.
Eight years living in Las Vegas hasn't dimmed Abe Green's optimism, earnestness, or desire to find the one. When a sexy man with lonely eyes propositions him, Abe decides to give himself a birthday present — one night of spontaneous fun with no thoughts of the future. But one night turns into two and then three, and Abe realizes his heart is involved.
For the first time, Abe feels safe enough with someone he respects and adores to let go of his inhibitions in the bedroom. If Jason can get past his own inhibitions and open his heart and his life to Abe, he might finally find the family he craves.

My Rating: (5 of 5 Stars) 5
The multiplier rating takes effect.

One of the best things in life is to read a book and cry from laughing. Before I even proceed with the review, let me just say: I thought that I could not laugh as hard and fall in love as much as I did with Walk With Me (Home #7) but I did and I have. Now I seriously am thinking that this book is probably the best written by CC. So far!

I wondered at the title: The Half of Us. I thought another mushy love story filled with angst and drama. I did not expect a romance building up from scratch even if the relationship started off at the wrong footing. I did not expect that the men would be so fitted to each other, like two halves of a whole. Well, they are and they did. Think: ying and yang. One of each as individual but completing each other. The positive to the negative. The perfect fit.

I love doctor stories, so of course I grabbed on to this one. The trailer (look up please!) says it all: Jason Garcia is an a$$. He is a typical surgeon whose skills matched the ego. He is also short tempered. But beneath all that, there is someone who is needing and wanting but could not find that someone who would fill his empty half. He goes the rounds, both in the hospital and in the gay bars around. He is constantly seeking but never finding. Not that he is really looking as he is still in that 'guilt' trip stage of having a history of cheating on wife and destroying his concept of what a family should be.

Until he heard a laugh that caught at him. Until he sees the eyes that met his unhesitatingly. Until he spends the night in the arms of the most unlikely man he had ever met.

Abe Green just wanted to go home, it was his birthday after all so he does have the choice to go. When he meets the beautiful eyes filled with want, need and sadness, he knew he wanted to give himself a birthday gift. One night is all it was, or so he thought, until it turned into two and then more.

What I really loved about this particular work of CC is that she gave her men such personalities that I completely related to. The way Jason thought - over thinking, hesitant, quietly, almost a facepalm event when realization hits, hiding his brilliant mind from the unknowing - these are characteristics I know by heart for this is exactly how my hubby thinks. The way Abe talked, his thought processes especially when dealing as a teacher and with the technical coffee maker that hissed and puffed. These are fictional characters, I know that, but they are so REAL!

As for the rest of it? Well, let me just say: FAN YOURSELF SILLY AND LAUGH YOUR HEARTS OUT!

Romantic as heck! Funny it sent me to tears. And smiling so goofy, it really hurts!

Best of all: I took a cold shower folks and I still laughed :D


Now CC has a gift, so continue on below.


To get a chance to win an ebook copy of The Half of Us (Family #4), leave a comment below. We will randomly pick 1 lucky commentator and Cardeno C. will email them their ebook version of their choice. Make sure to tell us what format you prefer and your email. Game ends October 1.