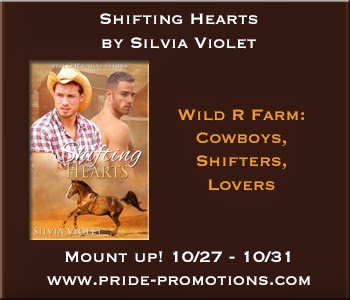 Silvia Violet writes erotic romance in a variety of genres including paranormal, contemporary, sci fi, and historical. She can be found haunting coffee shops looking for the darkest, strongest cup of coffee she can find. Once equipped with the needed fuel, she can happily sit for hours pounding away at her laptop. Silvia typically leaves home disguised as a suburban stay-at-home-mom, and other coffee shop patrons tend to ask her hilarious questions like "Do you write children's books?" She loves watching the looks on their faces when they learn what she's actually up to. When not writing, Silvia enjoys baking sinfully delicious treats, exploring new styles of cooking, and reading to her incorrigible offspring. 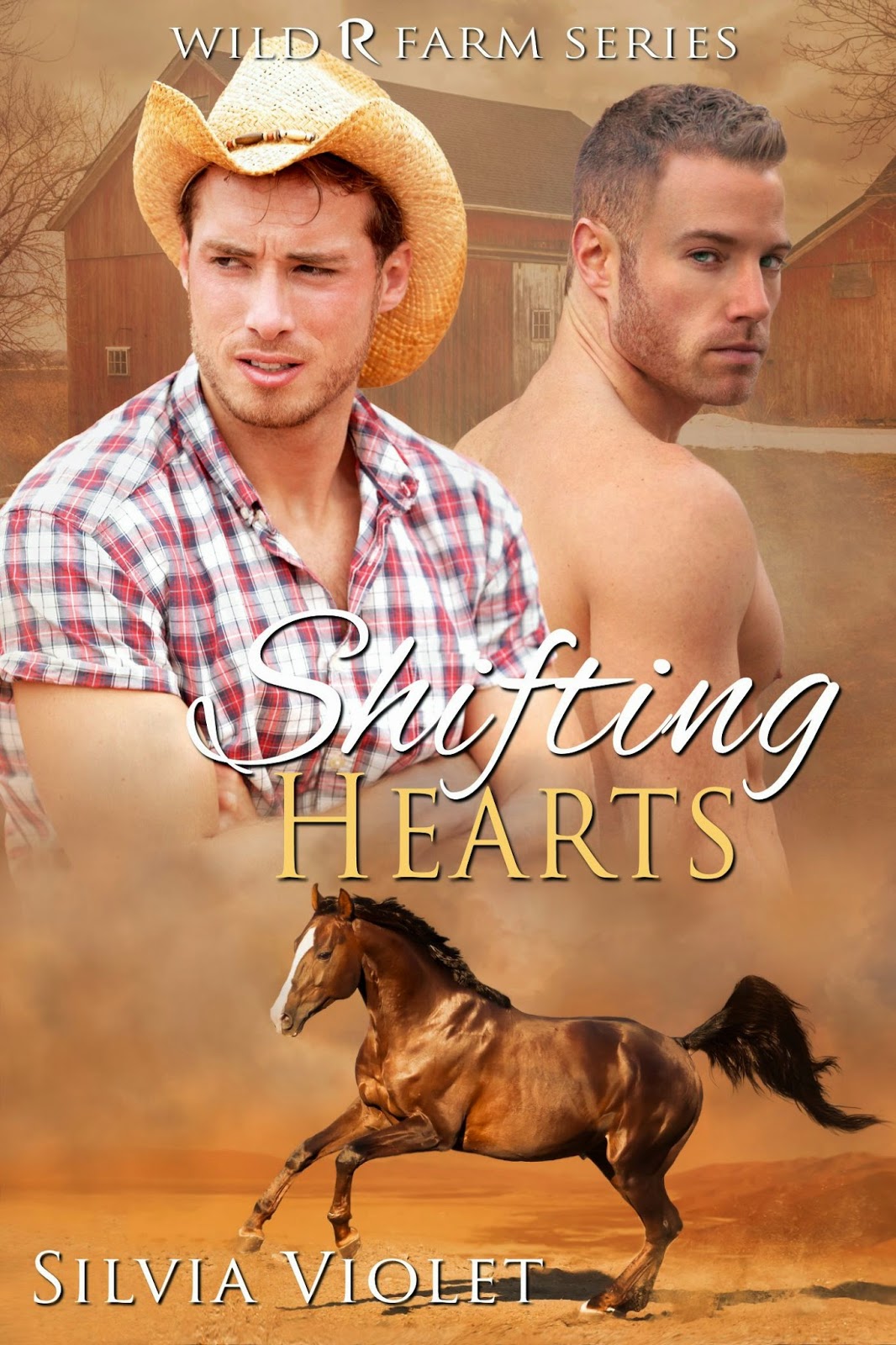 After experiencing what happens when someone you love walks away and never looks back, Brandon decided love was for fools. Then he spent a summer with Zach. He struggled against feelings that grew every time he and Zach were together, telling himself they were just having a fling. When Zach confessed his love one hot summer night, Brandon panicked. He scoffed at Zach and made sure he walked away first.Three years later, their paths cross again when Zach becomes the vet at Wild R Farm where Brandon works. Brandon realizes his feelings haven’t changed, but Zach treats Brandon with scorn despite Brandon’s every attempt to show Zach he’s no longer the self-centered man he used to be. When a night out ends with Brandon driving Zach home, confessions are made on both sides, and hope begins to build in Brandon’s heart.Categories: Contemporary, M/M Romance, Paranormal, Romance, Western/Cowboy

This is the sixth book in the Wild R Farm series but this read like a stand-alone so I was not worried. Also, there was a bit of a back story that covered any plot holes usually expected with a series book. Take note that this is the first book of the series I have read and this made me want to read the rest. Just sayin'!

This is a very light read and is set in a world where shifters are as much a part of life but curiously the gay community is not that accepted. I guess in any kind of world created, there are really those hard nobbins that logic cannot penetrate.

Brandon, the way I read it, was not a nice guy. At All. But it is his time to shine and Silvia Violet shows us a Brandon who needs love as much as the next man and he needed the love to come from his Zach.

Zach had been hurt terribly by Brandon's rejection of his love. He had not hated him, but he could not forget the humiliation and the broken heart that he felt. Yes, he was human, but his need for Brandon went beyond the shifter-human love affairs. There was just something about their chemistry he knew Brandon could not deny. But deny he did and now he finds himself seeing the man in the area he works and could not help but be sarcastic and angry. Then he gets drunk and his walls fall and the reality is: he is still fully in love with the guy. But the hurts still hurt and he needs to protect his heart.

But the buts keep coming at him, especially when Brandon shows a change. Can he risk his heart? His soul?

Oh, this was sweet! The romance is strong in this one, and Brandon is revealed to be someone who hurt more than Zach ever did. It goes back to his early life as a child and his losses. He did not dare risk for fear of losing and his technique to rejection worked. Until Zach. He knew he made a mistake, but he was scared to open himself to a relationship that may just not last. Seeing Zach after all this time was not a good thing, but it was a great thing. His attempts to reconcile were painful but the romance that finally blooms between the two men worked so well and so sweetly.

This was a really good read.

Brandon settled his and Zach’s tabs and managed to get Zach to his truck without incident. “Did you drive here?”
“Nope, Martin picked me up.”
Brandon snorted again. Fucking Martin. The two of them together was so not going to happen.
Zach giggled. “I’ve always loved it when you go all ferocious stallion.”
Oh fuck. “Just get in the truck, Zach.” Brandon helped him step up and maneuver himself into the passenger seat.
“It’s fucking wrong.“ Zach said as he laid his head back on the seat. 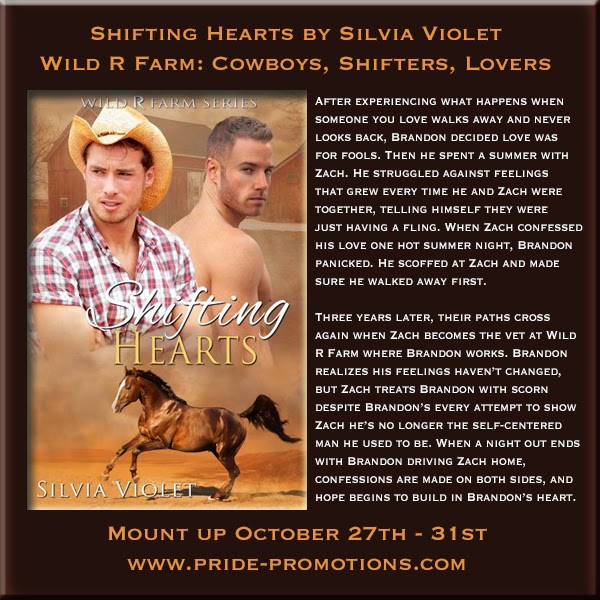 “That you’re so fucking hot.”
No. No, no, no. This was not happening. “Just close your eyes and stop talking. You’ll be better off that way.” Maybe he’d pass out and then Brandon’s dick could stop reacting to his soft words and beautiful eyes and everything that made him the only man Brandon really wanted.
“No, I’ll forget it all. Best thing about being drunk. I might as well say what I want because who will care later.”
“I will.”
“Nah, you never did. That’s what makes it so unfair.”
Brandon rubbed his forehead, trying to ward off a massive headache. “You’re wrong about that. I—”
“What? You didn’t mean to look at me like I was a bug you wanted to squash when I said I loved you?”
“You’re drunk. Really fucking drunk, and I’d be an idiot to say anything now. More of an idiot than I already have been and—”
“Fuck, you’re babbling.” Zach looked extremely amused.
Brandon scowled at him. “Nope, it’s your imagination”
“It’s not.”
“Yeah, it is”
Zach grinned. “You could kiss me to shut me up.”

Guest Post: Simple Tools & Resources I Depend On by Silvia Violet


I was asked to share some helpful tools and resources that I depend on so here goes:

Scrivener - My awesome author friend, Hank Edwards, recommended this writing software. I've now been using it for several years for all my writing projects. I love the ease of separating my work into scenes and looking at multiple documents on a split screen. I can even use it to format eBooks.

Dropbox – Every time I finish a writing session (and sometimes few times in middle of one), I save my file to Dropbox. I also periodically back up all my work files there so that if something happens to my laptop, I will be able to access my work immediately from another computer. Dropbox is also great for sharing large files with other people—ones that might not go through email—and it can be used for collaborating on documents.

Simplenote - I'm using this app right now on my iPad to write this post. It's exactly what it sounds like, a basic app for creating notes (or lists or anything that’s just text) that syncs on all my devices and on my laptop where I access my notes through the Simplenote website. I use it when I'm away from my laptop and want to get writing done because it also syncs with Scivener. I also use it for making to do lists and I can tag other users on a note and we can each see it and make changes.

Police Procedure and Investigation by Lee Lofland - This book has been a tremendous help for me in writing the Fitting In series and Lee’s website led me to discover Writers' Police Academy where I learned more than I thought possible in three days times about law enforcement and firefighting.

The FBI Career Guide - I highly recommended this book if you're writing about an FBI agent. I used it when writing If Wishes Were  Horses to help me learn about the structure of the FBI and the duties of a special agent. I got plenty of plot bunnies while reading it too. 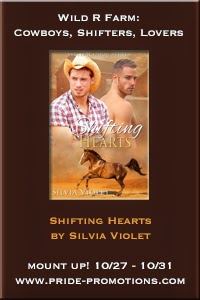