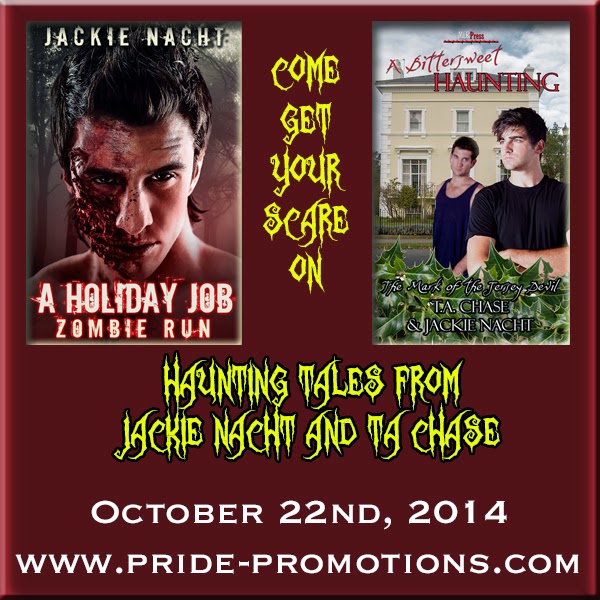 Short, sexy and sweet— where a little love goes a long way.
That’s the best way to describe Jackie Nacht’s stories. She was introduced to M/M Romance through her sister, Stephani, and read it for years. Then, she thought it was time to put her own stories on paper. Jackie began writing short and sweet stories that ended with a happily ever after.
Thinking back to her own book addiction, where there were many nights Jackie stayed up way too late so she could read just one more chapter— yeah, right— Jackie decided to write short romances for young adults as well as adults. Hopefully, they will give high school and college students, or working men and women something they can read during their lunch hour, in between classes or just when they want to briefly get away from the daily stresses of everyday life.

I’m T.A. Chase, and I write stories about men loving men, but my stories are more than that. It’s about one person finding the other half of themselves. It doesn’t matter whether that person is male or female. I’m a happily married woman living in the Midwest with my husband of fifteen years. I’ve been writing for six years now, and because of my awesome readers, I’ve been able to do it full time for over a year. 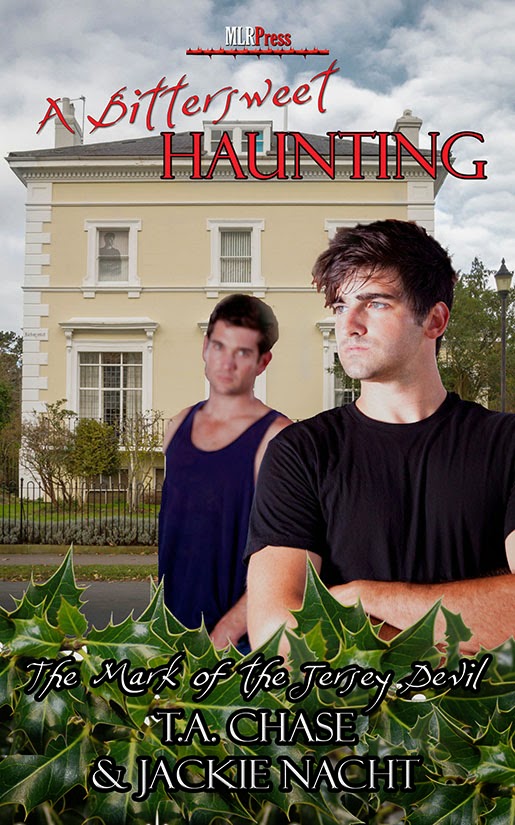 
In a moment of youthful curiousity, these six men were marked forevermore.
Jersey Paranormal Investigation was created when Braden and his five friends were marked by the Jersey Devil during their childhood. Now, they all have special gifts when it comes to the supernatural. Years later, Braden finds himself on his next job only to come face to face with the beautiful victim, Mack. Not all is it seems and Braden and his team will have to figure out why Mack is being targeted and to keep from falling for the man in the process.

Turning, Mack made his way to the old flight of stairs that creaked with every step he ventured. Goosebumps popped up on his flesh the more he ascended. Breathing heavily, Mack took the last step and cautiously made his way down the hallway. The air hung thick, and he almost choked on it. The closer he got to room 212, the more his flight instinct raised its red flag. The only reason he kept going was that he did not want to embarrass himself by returning empty-handed because he had been spooked.

Standing in front of the door, Mack’s hand trembled as he reached for the handle, finally turning it. Blowing out a breath, Mack decided to just get it over with. As fast as he could, he entered the room, searching for the box that held the spare linens.

Out of nowhere, a blast of freezing cold air hit him in the face, knocking him on his ass. Whipping his head around, Mack searched for an open window, only to find that all of them were tightly shut.

I’m getting the fuck out of here.

Climbing to his feet, he grabbed a box, praying that it was the right one and took off out of the room, not even bothering to close the door as he descended the steps two at a time.

Clutching the box to his chest, he leaned against the wall at the base of the stairs and caught his breath.

“Hey, are you okay?” Nick came up to him, relieving him of the box.

Mack wiped his sweat-soaked forehead. What the hell was that? His heart was still pumping, and his mouth couldn’t even form the words to lie to Nick and tell him he was okay.

Megan came up next to Nick. “You all right?”

Nodding, Mack rasped out, “I’m fine…just…” He just couldn’t say it. There was no way he was going to say something weird happened upstairs, especially when he actually didn’t see anything. Hell, was it all in his head because he was freaked about going upstairs? Possibly.

Shaking it off, he finally answered, “I’m fine. Let’s go, Nick, and get the Ivy Room set up.”

“Are you sure?” Megan eyed him with concern.

“Yes, tea starts in forty-five minutes. I better get moving.”

For the next half hour, Mack and Nick set up the room. The linens were placed on the tables—thankfully Mack had grabbed the right box. They both worked in unison, setting the silverware up and getting the china out for each member of the party coming in.

“I’m just going to fill up their water glasses,” Mack called over to Nick who was doing the final touches on center pieces.

Going behind the bar, Mack grabbed a pitcher and began getting ice out of the bar well. As they both worked, the curtains billowed as a gust of wind came into the room. Mack shot a look toward Nick to see him wide eyed as the room's temperature suddenly plummeted. Before Mack even had time to think, the bar rack above him came crashing down upon him.

“Mack!” Nick cried out from across the room as glasses began shattering all around him.

Stunned, Mack couldn’t even move an inch as the shards of glass surrounded him. The floor, the bar, even his body was covered in the sharp glass. He feared if he moved so much as an inch, he would cut himself. The sounds of people screaming and hollering broke him out of his shock, and he slowly raised his head, feeling glass fall from his hair, to stare at Megan from across the room.

“Don’t move, Mack. We’re coming to help you.” Megan gingerly made her way to him, accompanied by the sound of glass crunching under her feet.

“Not…moving.” Mack felt the glass slide down from the top of his head and fuck if that didn’t give him the biggest case of the willies.

“I’m going to need some help and a pair of gloves,” Megan called to Nick.

Nick nodded and ran out of the room.

Megan pursed her lips as she began pulling large pieces of glass off him.

“Are you okay?” Megan asked quietly as she worked the glass out of his hair.

“Not even close.” Mack’s voice trembled, and he hated that.

Nick came up behind them and answered. “There was this blast of cold air, and then the whole bar rack came crashing down on Mack. It was a ghost.”

“It wasn’t,” Mack denied. If he denied it enough, maybe he would eventually believe it himself. Maybe.

“Hon, that rack is oak. It’s as solid as they come. Wind wouldn’t have caused it to break. Plus the windows aren’t open. I think you had an encounter, and a violent one at that. I think I’m going to need to make a call.”

“It’s not that bad.” Even as Mack said that, he knew it was a lie. Something inside him felt violated, and an air of malice hung thick over him.

“Then let’s just have it checked out for peace of mind. Okay?” Megan grabbed the gloves from Nick and began plucking the tiny shards off his shoulder and neck. Her gloves came away from his skin with a trace of blood. 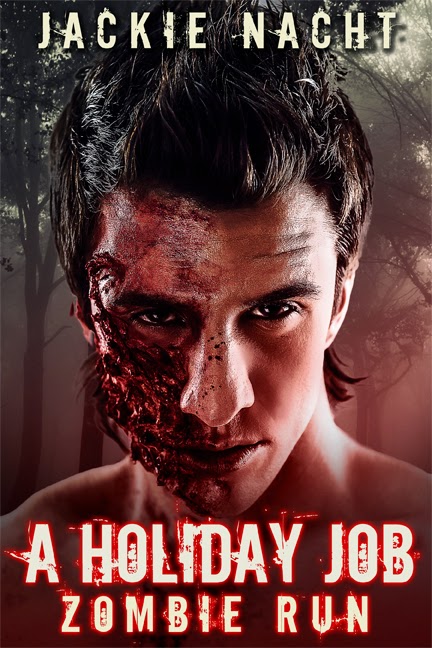 This Halloween, Drake is about to meet one guy he can’t say goodbye to.And Drake is about to meet his match.After a casual encounter, Drake can’t seem to stop thinking about Wilson. Even though Wilson pretty much thanked him for a nice time and walked out of his dorm and his life.Now Halloween is approaching, and Drake is being roped into volunteering for the charity fun run. Having to dress as a zombie is horrible enough, but seeing Wilson at the starting line has Drake ducking for the trees. Will Wilson look past the gory makeup to see Drake actually cares about him? Will Drake finally be able to capture Wilson’s heart?

“Will you knock that off?” Drake batted Ian’s hand away.
“Look, asshole, I need to put this makeup on you. You volunteered!” Ian charged back in and began putting the prosthetic on his face.
“Don’t you think you’re going overboard on this? I mean, why don’t you just squirt some ketchup on me?” Drake was thoroughly annoyed.
He’d volunteered to be a zombie for Ian’s frat charity run. He had thought he would just tear some holes in a white shirt and put a little makeup on, but no, Ian wanted to scare the hell out of everyone. The guy thought he was on Skin Wars or some shit. Drake wanted to scratch the prosthetic on his cheek that was currently being painted to look like a zombie. He thought he looked ridiculous. Shaun was splattering paint all over his shirt.
“This is just a Zombie Run, guys. I’m not going to be in a movie or anything.” Drake stared up at Ian, annoyed.
“Have fun and live a little. You’ve been in a pissed-off mood for the last month.” Ian pointed out.
And why shouldn’t he be? He hadn’t found the guy he’d hooked up with last month, and it was now his all-new obsession. He hadn’t had sex with anyone since and was constantly long necking the corridors in hopes of finding that white-blond head.
It didn’t matter how hard he tried; the guy was nowhere. Drake was beginning to wonder if the guy even went to their college. Shaun had helped him, but so far, his friend couldn’t spot him either.
Drake had never been so caught up with a person in his life. Unbelievably, he’d had dreams of the guy and those sapphire eyes, but it was like this damn race. Whenever he tried to go after him in the dream, the guy took off in a crowd and he couldn’t find him. Drake growled in irritation at his own thoughts.
“It’s not that bad,” Ian chastised, probably mistaking his growl for a complaint about the stinky paint that was being applied to his face.
Drake wasn’t going to correct Ian on the matter. Then, he would have to explain to all his friends again about the big about face he’d had this year. They all had looked at him like he had lost his ever-loving mind. And he had. He didn’t even know the guy’s fucking name, yet he was hunting him down all over campus like some stalker.
Shaun came in with a grotesquely painted face and a smile. “Didn’t Quinn do a great job?”
Shaun was actually happy to look like the dead. Really. Didn’t that shit all over his face itch like crazy, or was it only bugging the hell out of me?
“You look like you got ran over by a truck.” 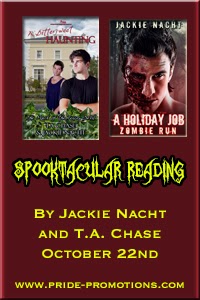