Multi-published Remmy Duchene was born in St. Anns, Jamaica and moved to Canada at a young age. When not working or writing, Remmy loves dabbling in photography, travelling and spending time with friends and family. 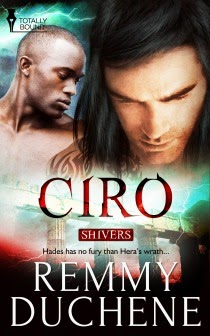 Hades has no fury than Hera’s wrath...
Ciro is the son of Zeus and the goddess of the Storm Winds. He must stop his crazy, cursed brothers from destroying Earth, but most importantly from destroying the man he loves.
Ciro Pyktis was born with a target on his back, thanks to his father Zeus’ infidelity. Tired of her husband’s man-whoring ways, Hera cursed his latest offspring born outside their marriage to become Shivers. Somehow, Ciro was born a good Shiver, but a few of his brothers are hellbent on destroying him and the humans.
Finally, Ciro finds the man of his dreams and he should be happy, but now, not only does he have to protect all of Earth and Olympus from his brothers, he must also keep Carter Olabasu safe from the evil Ciro knows is coming.
Carter Olabasu has everything—his brother finally accepts his homosexuality, Carter has a thriving architecture business and the freedom to do what he wants when he wants. But he’s lonely. A chance meeting at a nightclub brings him into Ciro’s path. Almost instantly, he’s obsessed by a need that he’s never felt before—one for Ciro. However, when the world starts falling apart around him, Carter will have to face the fact that his new man isn’t who Carter thinks he is, and there are things that go bump in the night humans can never, ever find out about.
Publisher's Note: This book was previously released by another publisher. It has been revised and re-edited for release with Totally Bound Publishing.

Author Remmy Duchene has been around for some time, but from my understanding, this is the first paranormal he has written. It is not so much a paranormal plot in the sense of vampires, demons or shifters, more it is a twisted take on Greek mythology. This story centers around the Shivers, sons of Zeus from his mistress Thýella, goddess of the Storm Winds. Angered by the fact, Hera proceeds to curse all sons of the union turning them into Shivers.

As the eldest of the brood, Ciro took the brunt of the curse, making him the strongest and most powerful, but instead of turning him into a vindictive and power-hungry being, he used his powers to serve the beloved humans of his mother. His brothers, on the other hand, they were a different story and now it is up to him to discipline them. Should they turn violent, he must sentence. This all works well, until he meets his life mate who just so happens to be a human. Something which the infallible oracle never mentioned once. Now the tides are turning and the chaos rises. Ciro must now protect not only the humans but his beloved as well.

Carter Olabasu is a self-made man and has the money to show it. He, however, was lonely and his determination to make sure his beloved older brother never gets uncomfortable with his homosexuality made him a recluse of sorts. When his brother finds out, he feels the guilt. Then Ciro walks into his space and Carter knew he wanted this man but then things started happening that pointed to the paranormal and it is not something he can comprehend. Things go to a head when Ciro displays his powers and history which Carter now must balance with love and incredulity.

The only thing I will gripe about? The loose ends. However, this obviously is the first book and I am thinking I should be more patient and wait for the installments to answers quite a few questions I have running: like what exactly makes a Shiver, a Shiver? or what is the secret that Carter's brother keeps trying to voice out but is scared to do?

I guess I have to be patient and wait and see.