Elin Gregory lives in South Wales and works in a museum in a castle built on the edge of a Roman fort! She reckons that’s a pretty cool job. It certainly provides more than enough inspiration for her writing.
“The button from a military jacket found in an orchard, a 16th century Venetian coin found between the cobbles of a Welsh street, a carnelian from a Roman signet ring – one can’t handle them without wondering who lost them, how much they regretted it and what kind of disaster was sparked off by the loss.”
Although Elin usually writes on historical subjects, she has also written contemporary and historical paranormals, science fiction, crime and a Western, none of which have, as yet, been published. She likes her heroes hard as nails but capable of tenderness when circumstances allow. 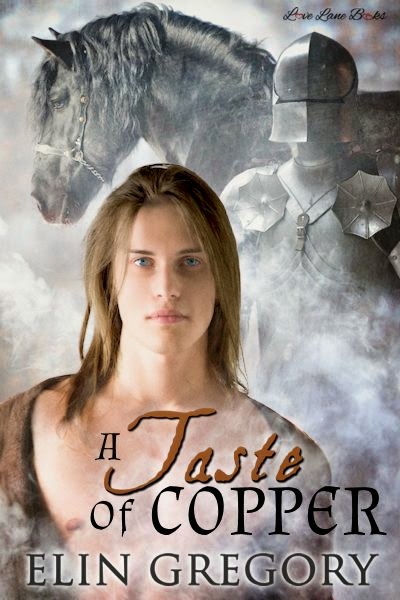 Your master has the field for today, but his name, whatever it might be, is without honour.

Olivier the squire worships the Black Knight and takes a fierce joy in his prowess as he defends a bridge against all comers. Olivier only wishes that his master loved him as much in return instead of treating him as a servant and occasional plaything.

Then word comes that the King desires to cross the bridge. With an army approaching, a bright eyed archer enticing him to desert and the first cracks beginning to show in the Black Knight's gruff demeanour, Olivier is left wondering if his honour is worth more than a chance for happiness.


This is a story of one knight's honor as dictated by his code of chivalry in the times of the Middle Ages. Honor was the by all and end all of a knight and live or die, the honor of the man overrides all sense of logic and feelings.

The Black Knight, Sir Maheris Schade, was a master in both battle and codes of chivalry. He was sworn to keep all from crossing the bridge as his Lord and Master escaped with the rest of his people deeper within the country. Logic dictated that his Lord was wrong but Maheris was sworn and so was obligated to keep his word. Live or die. And so he kept the bridge from all passers.

Olivier was Maheris' squire and so was just as duty-bound to keep his master's honor. His logic dictated his master was condemned to die but he had to keep him alive. He loved his master as no man should. If only his master would return his feelings.

When the King decides to cross the bridge, it was Maheris who kept them at bay but it was Olivier who had to hold talks for his master. There, he meets the archer who would tempt his desires and lure him to play traitor to his master.

This is a short story and was a fast read but it was filled with the right action, the right bits of romance and erotica. It is also a read that allows us to catch a glimpse into the illogical sense of chivalry that ruled the day and so was frustrating enough to give us a bit of drama.  Elin Gregory successfully tells this story of romance and chivalry involving two men whose status in life and court made love and romancing almost impossible in these times.

Olivier knelt at his master’s side and used a little of the hot water and a clean rag to clean around the gash. More blood ran as he pinched the flesh to search the wound, but it had to be done. There—almost invisible against the flesh—a shred of thread from the torn shirt. Such a thing caused bad humours in a wound, caused it to stink and rot, could cause a limb to blacken, a man to die. Olivier took a silver needle and silk thread. He seared the needle in flame and soaked the thread in spirit. Even in the dimness of the pavilion, the tip of the needle shone bright against the exposed meat of Maheris’s arm. Olivier teased out the shred of fabric, wincing on Maheris’s behalf as the muscle tensed, then closed the wound with three even stitches.

Maheris breathed deeply through his nose, his right hand clenching on the arm of his chair until Olivier was sure the wood would crack, but he made no sound at the bite of the needle. Olivier pushed his hair back from his cheek with his wrist, grimacing at the scent of blood on his hands. He could taste the coppery tang of it, mingling with the far more pleasant smell of Sir Maheris’s sweat.

“Done, sir,” he whispered once the final stitch had been tied off, the bandage secured.