CHRIS SCULLY lives in Toronto, Canada and grew up spinning romantic stories in her head. When the tedium of a corporate day job grew too much, she took a chance and found her escape in writing. Now she longs for the day she can make writing a full-time career. Tired of the same old boy-meets-girl stories, she found a home in M/M romance and strives to give her characters the happy endings they deserve. She has written several M/M romances for Dreamspinner Press and her debut novel, Nights Like These will be released in early 2015. Touch Me is her first foray into self-publishing and more erotic content. 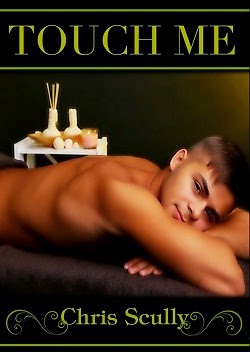 Unfortunately for Eric, he touches everyone but no one reciprocates. His touch healed others but not him. When personal tragedy strikes he is surprised that the least person he thought would help him out would be this young college boy he gave a happy ending to a few months back.

This is a short story but it packs a whole lot of insight into the world of erotica. It brings romance to a whole new level and opens quite a few doors of the unexpected. Yes, this is erotica, but it does not read as such because of the depth of feelings and thoughts brought out by this little work.

Can I call this brilliant?

THE KID WAS NERVOUS.

Terrified might have been a more appropriate description given how his chocolate-brown eyes darted wildly over Erik and then into the shadows behind him as they shook hands. His palm was cold but clammy. His lips quirked as he realized it too. “Ah, sorry about that.” He wiped both palms on the front of his thighs, leaving dark streaks on his faded jeans. “I’m a little nervous.”
“Don’t worry about it,” Erik said with a comforting grin as he ushered the kid in the back door and out of the cold dusk. He always instructed his extra-curricular clients to use this entrance. It’s not that he was worried about anonymity—his office assistant and the other massage therapists he shared the practice with were gone for the day, and he’d already given the kid this address and his first name, but he preferred to be discrete. He supposed discretion must seem very old-fashioned these days when everything got posted to Facebook or Instagram, when a good sex tape launched celebrity careers and privacy was nothing but a fond memory. Then again, he considered himself to be a bit old-fashioned despite his current, distinctly non-old-fashioned activities.
He led the way down the narrow, carpeted corridor and past two other small rooms before he came to the one he wanted. He was relieved to see the young man’s tenseness easing with each passing second as he surveyed the dimly-lit but immaculate room with the professional massage table in the center. Erik knew exactly what he was thinking. “I bet you thought you’d be in some guy’s dingy basement, right?”
“Yeah.” The kid shucked his down-filled coat, hugging it awkwardly in front of him for protection. He was tall—the same height as Erik—but without all the extra layers Erik saw that he was on the lean side, and gawky, as if his body hadn’t quite caught up to the rest of him yet. Erik took the coat and hung it up on the coat rack behind the door. The cold radiated off the waterproof fabric. The calendar may have said March, but the weather apparently hadn’t flipped the page yet.
Erik turned back to the kid just in time to see his eyes widen as they landed on the array of dildos and vibrators displayed next to the massage oils on the nearby shelves. He looked away and then back. Good, Erik thought, he was curious. His body tingled in anticipation of a enjoyable session. The more open his clients, the better the experience. For all of them.

To get a chance to win an ebook copy of Touch Me, leave a comment below. We will randomly pick 1 lucky commentator and Chris Scully will email them their ebook version of their choice. To claim prize, make sure to tell us what format you prefer in the email you send us after winner is announced. Game ends October 9.


Note: This post was edited to insert the #Giveaway.