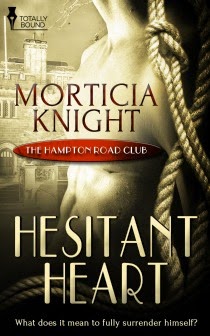 Sam is a naïve young man who arrives in Hollywood to escape his brutal father. When the older, sophisticated Aaron rescues him, Sam discovers what it means to fully surrender himself to another.
Eighteen year-old Sam Cunningham is used to living with lots of secrets. He’s had to hide his true nature his entire life or else incur the wrath of his strict and abusive father. When he’s faced with a horrible ultimatum, he flees to Hollywood where he hopes he can escape the fate his father has planned for him.
Aaron Rubenstein is a wealthy and sophisticated man who loses himself in painting portraits of bound men to help stave off his loneliness and despair. Unable to find a lasting connection with anyone, he’s had to resort to paying lovers not only for their affections, but to be allowed to indulge in his darker passions. Aaron’s only respite is his nights at the Hampton Road sadomasochism club where he’s a respected Dominant.
Naïve and inexperienced in the ways men can please one another, Sam takes a job at a bathhouse where he first glimpses a beautiful older man. Aaron notices the sweet towel boy watching him with interest every time he patronizes the Temple of Eros bathhouse. A traumatic incident for the innocent towel boy triggers Aaron’s protective tendencies and he’s compelled to rescue the gentle Sam from the clutches of the Temple’s manager.
They embark on a journey together that teaches them both things about themselves that they never knew. As their bond deepens and Sam is trained for his first night at the Hampton Road Club, an unknown danger lurks. Will Sam’s father find him and destroy both men’s chance for true happiness together? Or will Aaron protect his boy and keep him for always?
Reader advisory: This book is best read in sequence as part of a series.

Sam was working as a towel boy at a bathhouse in 1920s Hollywood after having run away from a home that was oppressive as it was abusive. Set apart from society, never allowed to any thing modern, Sam was a true naive. It is there that he set eyes on a beautiful, much older man. This man set his heart to hope and feel and Sam just wanted to be in that man's life. The problem is, the man did not really look at him, nor talk to him, not with Sam being very quiet and reserved.

When Sam's boss and co-worker pressure him to do something he had no idea what but just knew was wrong, this was then when Aaron takes notice. The protective instincts come to the fore and he just wanted to care for this young boy. His problem was that he saw himself as some sort of a freak. He had needs he could never voice in polite company and in the process, reclused himself from having real relationships for fear of being found out. His only relief was to pay for his company and to paint. This all changes when he finds Sam.

The story of Sam and Aaron as a couple began really slow. On Aaron's part, he was just plain scared Sam may run when he discovers his 'perverted' needs. On Sam's part, he was confused why the older man would reject him when he declared first off that he would be one to stay. As they got to know each other, they settled and learned each others' needs. Their journey to discovery was slow, gentle and full of love.