Brooke Johnson and Natalya Parks are the authors of "The Need to Touch" from the Stay True series. They have other works in process.

Brooke Johnson lives in Louisiana with her five girls, wonderful boyfriend, and many pets. When she is not working on finishing her current degree, she can be found fishing, coloring, or blowing bubbles with her kids. Just over a year ago, Brooke decided she wasn’t going to back down from her dreams, and started writing full time. With the encouragement of her family she is proud to be publishing her books for the world to read.
Brooke started reading later in life. Unlike many authors who have always had a special love for reading, Brooke didn’t pick up a book until she was in her late teens. She remembers wanting to find something to do with her mom, who has always been her best friend. One day her mom was talking about a romance novel that she just read. Not being interested in it all, Brooke gave in and read the book. She’s been her mom’s reading partner ever since. They can now sit and talk, laugh and even cry about all the books they have read over the years.
So, with great pride and honor, Brooke is happy to thank her mother for encouraging her to not only read, but to follow her heart, and write her own books. What started as simple poetry on scrap paper, at the age of seven, is now a dream come true. Brooke started writing but felt something was missing. When she started writing with Natalya Parks, everything seemed to fall into place, and now here they are. Launching books, and writing more. This may be the first you see of them, but Brooke is determined that this won’t be last. Brooke is excited for you to meet their characters, and fall in love with the men that they have spent many hours with over the last year, just for you!!

Natalya parks lives is Louisiana with her beloved dog, Napoleon.  Natalya enjoys spending as much time as possible with her children and grand children.
Natalya has had an ongoing passionate love affair with books since she was four years old. While her friends were getting in trouble for not reading she was getting in trouble for reading. She was late for dinner, forgot to do her chores, stayed up past her bedtime, forgot about homework and was late for the school bus on many occasions; because she couldn’t put the book down.  Her most embarrassing moment caused by reading a book occurred when she was in seventh grade. The school bus pulled up to her stop and of course she couldn’t possibly stop reading. The story was just too good. So with her nose still in her book she slowly made her way down the aisle of the bus. She as she got to the top of the stairs she tripped over an instrument case that was jutting out just a bit into the aisle. Where she promptly fell head first down the stairs landing in a heap in the dirt, her feet resting on the bottom step. Natalya was wearing a dress that day. She has wanted to be a writer since she was a teenager but never thought she could write anything good enough for someone else to want to read. Her dear friend Brooke convinced her otherwise and literally dragged her into the world of writing. Something she will be forever grateful. Now, not only does she get to love and enjoy works by other authors but also those that she has contributed to as well. Her mind still goes tilt, tilt when she thinks about the fact that she is a published author. Dreams really can come true. 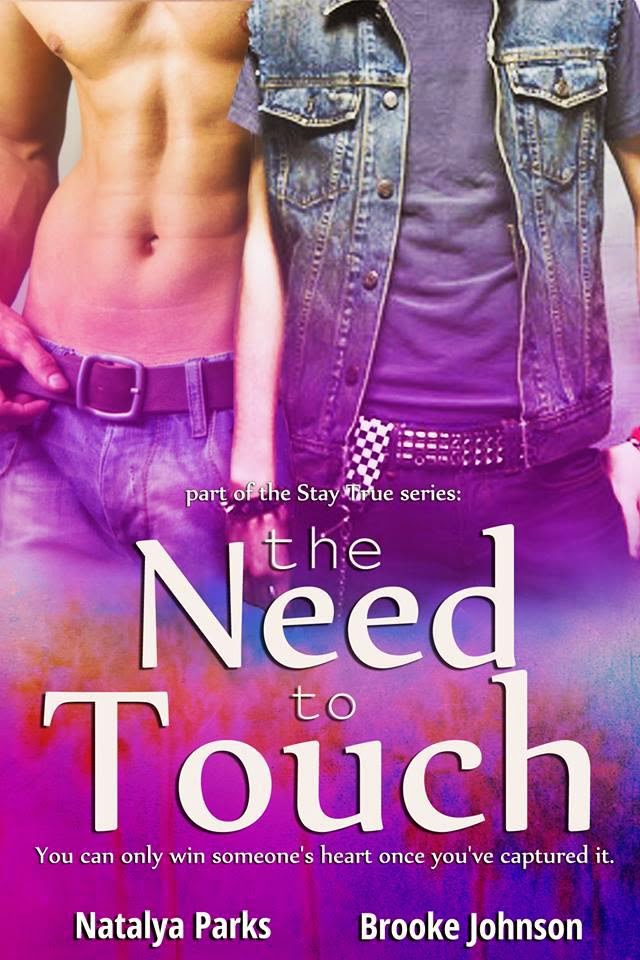 The Need to TouchStay True Series, Book. 1 *Warning: Mature content*You can only win someone’s heart once you’ve captured it.Nineteen year old Ryder Harrison grew up near a small town in Montana, working on the family’s ranch and in love with his best friend, Landon Pennington. That was until his Grandfather decided he needed to go to college in California. Ryder promised his Mom before she died that he would finish his education. Staying true to his word, Ryder packs his clothes, and heads to California, confident that it would all be one big disaster. The only thing he hadn’t planned on was meeting Bentley Carter.Twenty year old Bentley Carter has enough emotional issues to write his own ‘How to Cope’ manual. Surviving an abusive childhood, he made a personal promise to always stay true to himself, and never let emotions overrule his common sense. Content with his current life and friend with ‘benefits’, Ben is determined to not let his new roommate affect him.Uncertain about their places in the world, and with each other, Ryder and Ben struggle to understand the person who is not what they thought they wanted, yet who they are unable to live without. Living in a sometimes cruel and unforgiving world they are determined to embrace the reality of falling in love and the challenges that follow.

This was very nicely done! Two young men finding themselves together is a plot that is common but when the read is entertaining enough to halt me from putting it down for even a minute means that this was a story I was unwilling to let go of.

We have Bentley Carter, a proud and out gay young man in college, about to graduate and welcoming freshmen into the dorm when in walks cowboy, straight-looking, tobacco chewing Ryder Harrison. Of all the men he had been with, somehow, it is Ryder who strikes the chord he left untouched forever. Although it was difficult to comprehend or to even admit, Ben was falling hard. It does not help that Ryder is one awesome character who is loyal as loyal could be.

This is a beautiful and awesomely sweet love story about falling in love, maturation and decision making. Ben's past is not a fairy tale - well not compared to Ryder's happy family. Yes, both had their own tragedies but Ben felt that he should not ever let go of his heart or lose it forever to pain. Ryder was tough to resist though and just kept on with his decision to love and slowly his walls came crumbling down.

The drama of the story comes in Pops and Landon. For Ryder, he owed his whole being to Pops and only wanted to work the farm. Landon, his best friend since forever was his one weakness and falling in love with him was too easy. Getting rejected by Landon, however, was not a good thing and the rift seems bad enough to set them incommunicado with each other. When he fell in love with Ben, Ryder saw the difference of first flush love versus true love and thought and decided he would not leave the Ben's side and made a decision. For Pops, Landon and Ben, that decision was enough to make or break whatever bonds they had developed.

Then there was the ending!

Holen, that came out of the blue but it was perfect somehow and it just kept this story alive for me and longing for what comes next.