eARC Review: Sleuth, LLC: Bring Out Your Dead (an Avondale Story) By Etienne

The much anticipated sequel to the mysterious Sleuth LLC: Birds of a Feather (Avondale Stories, #4). Written as only Etienne does it: the men are men, the romance strong, their lives interesting and (dare I say) sexy.

Etienne lives in central Florida, very near the hamlet in which he grew up. He always wanted to write but didn't find his muse until a few years ago, when he started posting stories online. These days he spends most of his time battling with her, as she is a capricious bitch who, when she isn't hiding from him, often rides him mercilessly, digging her spurs into his sides and forcing the flow of words from a trickle to a flood. 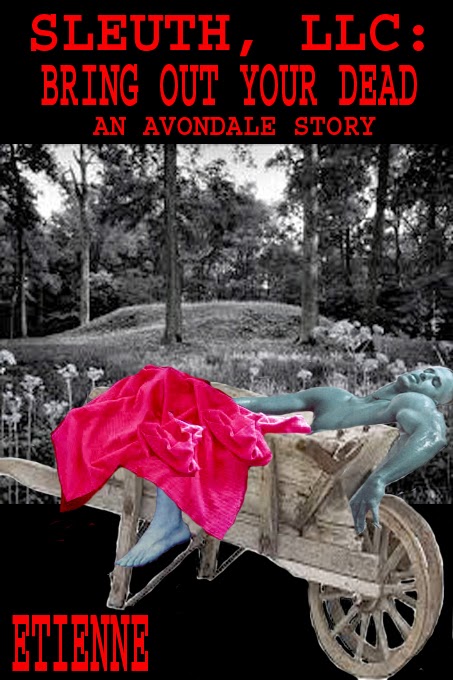 Telepathic private investigator Quentin Q. Quasar and his partner Nate Braddock are back. They accidentally stumble on a series of kidnapping/murders, and begin to investigate. Eventually, the kidnappers snatch a young man from an Interstate rest area, and Quentin and Nate hear his telepathic cry for help. Armed with that information, they contact their friend George Martin at the sheriff’s office, and manage to catch the kidnappers before they’ve killed the victim. The intended victim was on his way to Orlando to join his boyfriend—also a telepath—who’d recently moved there to take a job.Meanwhile, Nate’s grandparents fly into Jacksonville from Chattanooga, so Quentin and Nate can drive them to a hospital in Ocala. Nate’s mother has been in a state prison for women located near Ocala, and has been diagnosed with terminal cancer. At the end of a series of hospital visits they encounter and capture the leader of the cult that Nate’s mother and stepfather belonged to. The cult leader and his wife, both of whom had jumped bail before their trials, had just administered poison to Nate’s mother, to keep her from making any sort of deathbed confession about the cult and its activities.

Etienne has come up with a sequel to that telepathic duo, Quentin Q. Quasar and boyfriend, Nate Braddock from Sleuth LLC: Birds of a Feather (Avondale Stories #4). They have been living together for a while now with Q still the Private Detective Extraordinaire and Nate finally fulfilling his dream to be an educator. The two are telepathic and they use it to their detection advantage and Nate finds himself more and more leaning towards the mysteries unsolved. Still, Nate has a long way to go, he needs Q's strength and leans on him for most things, especially when it comes to matters of the heart.

Their telepathic abilities has grown in strength and they find that distance did not really matter most for them, as long as they zero in on each other they could communicate. Today, it is second nature for them to use their powers for whatever purpose so it did not really surprise them that they should stumble into a serial killing that no one had even taken notice to.

Struggling to make sense out of the killings and at the same time making sure to keep Nate out of any danger, Q has no choice but to contact George Martin and ask him to keep their names out. In the meanwhile, they need to rescue a young man from kidnapping and eventual death. That young man just happens to be one of the telepaths of the world.

On Nate's side of the story, his mother comes into the picture once more. Dying from terminal cancer, Nate acts as the driver for his grandparents who wanted to connect with their estranged daughter. Although far from his mind, there was still that glimmer of hope that maybe his mother would connect with him once more. When the eventual fallout happens, it is Q who picks up the pieces for Nate and protects him from the hurts of the world.

This story is a sequel to one of the more mysterious stories that author Etienne had written as part of the Avondale Stories. Set in Avondale, Florida, a community that is known to be very tolerant to the LGBT community. We meet the men of the series and the familiar places they frequent. Q is still that stoic detective who only sheds his walls within the boundaries of his bedroom shared with Nate. Nate has grown to maturity but still obviously needs to lean on Q when the going gets tough. Emotionally, he still has a long way to go, but obviously getting there.

As they gather intelligence for whatever case they need to solve, Q can be quite amusing when sending telepathic messages to Nate. At times hilarious, at times comedic, he does have a thing or two to say about men's genitals versus women's robes. Nate of course simply gets amused as his running commentaries are sent, even when stuck in the house grading the papers.

This is a fantastic and very fitting sequel to Q and Nate's story for I always did wonder what was next with these guys. They appear every now and then throughout the whole series and they are as enigmatic as ever when in public. George and the rest do wonder about them now and then, but these two never let on to what they could do. Especially when digging into the thoughts of people around them.

I do have to say: there is more to this couple than meets the eye and I wonder where Etienne is taking us fans. All I could do is sit, wait, and find out for this man keeps surprising his readers with stories that gets getting better. As beta reader I am always amazed by how this author turns his work from a simple plot to a more mysterious one. Keeps me guessing and on my toes every single time.