We would like to thank author Melanie James for donating an audio book copy of Conjuring Darkness: Darkness, Book 1, to one lucky commentator who gets chosen. Make sure to leave a comment below to get a free audiobook.

Melanie James is a Western Pennsylvania native who spent several years in the Chicago area, before being dragged to the frozen land of Northeast Wisconsin that she has called home for the last nine years. Not that she minded! She prefers country living and small town life. Melanie is married to the most amazing husband that any woman could ask for. She has two fabulous kids that keep her on her toes and she wouldn't trade them for the world or even consider selling them on e-bay. Most Days! When she’s not writing, she works part-time in the IT world (shhh don’t tell anyone, she really is a tech geek). She is also working on her graduate degree at the University of Wisconsin Stout.

Author Melanie James is offering a UK Audible freebie to give away  in exchange for reviews at Audible UK. 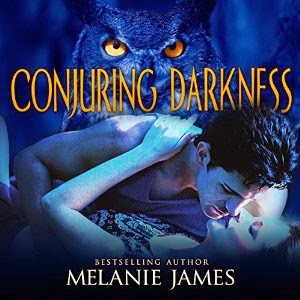 
Twenty-five-year-old Lexi Salenko is an independent and focused young woman who has realized her dream of moving to the open country of Montana and starting up a quaint bookstore. Romance and adventure have always remained within the covers of her cherished novels until one day she receives a mysterious letter from her archaeologist sister. The letter was sent from Israel and was badly damaged, but Lexi understands enough of it that her sister may be in trouble. Lexi follows the cryptic instructions sent to her and finds herself propelled on an odyssey across three continents with a very sexy former Navy SEAL turned mercenary and a mysterious ancient relic with ties to an ancient cult. She learns about a supernatural force that stretches from the ancient ruins at Gobekli Tepe Turkey through the death camps of the Holocaust and into her present life. Along the way she learns that sometimes you have to let yourself fall in love and believe in the power of hope.


To get a chance to win an audio book copy of Conjuring Darkness, leave a comment below with your email address. We will randomly pick 1 lucky commentator and Melanie James will email them their audiobook.

To claim prize, make sure to reply to our email as a confirmation once the winner is announced.