RJ Scott has been writing since age six, when she was made to stay in at lunchtime for an
infraction involving cookies. She was told to write a story and two sides of paper about a trapped princess later, a lover of writing was born.
As an avid reader herself, she can be found reading anything from thrillers to sci-fi to horror. However, her first real true love will always be the world of romance where she takes cowboys, bodyguards, firemen and billionaires (to name a few) and writes dramatic and romantic stories of love and passion between these men.
With nearly seventy titles to her name and counting, she is the author of the award winning book, The Christmas Throwaway. She is also known for the Texas series charting the lives of Riley and Jack, and the Sanctuary series following the work of the Sanctuary Foundation and the people it protects.
Her goal is to write stories with a heart of romance, a troubled road to reach happiness, and most importantly, that hint of a happily ever after.

Chris Quinton started creating stories not long after she mastered joined-up writing, somewhat to the bemusement of her parents and her English teachers. But she received plenty of encouragement. Her dad gave her an already old Everest typewriter when she was ten, and it was probably the best gift she'd ever received – until the inventions of the home-computer and the worldwide web.
Chris's reading and writing interests range from historical, mystery, and paranormal, to science-fiction and fantasy, writing mostly in the male/male genre. She refuses to be pigeon-holed and intends to uphold the long and honourable tradition of the Eccentric Brit to the best of her ability. In her spare time [hah!] she reads, embroiders, quilts and knits. Over the years she has been a stable lad [briefly] in a local racing stable and stud, a part-time and unpaid amateur archaeologist, a civilian clerk at her local police station and a 15th century re-enactor.
She lives in a small and ancient city in the south-west of the United Kingdom, sharing her usually chaotic home with an extended family, three dogs, a frilled dragon [lizard] and sundry goldfish and tropicals. 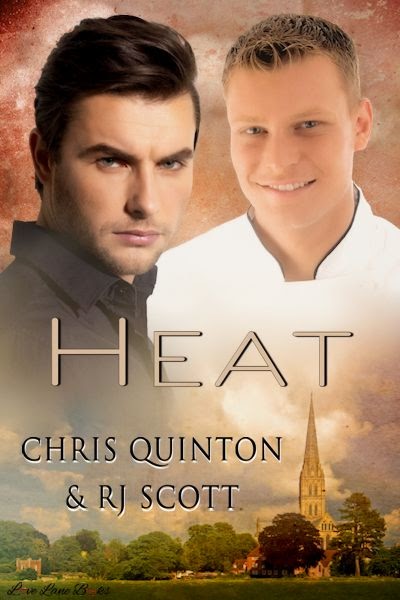 Available from Love Lane Books, Amazon and All Romance EBooks


Serving up passion, family, love and hate, with a side order of arson.
Lewis has lost nearly everything, and now it seems that Devon is here to take the last thing he has left - working in his beloved restaurant, Laurels. But when an arsonist threatens everything Lewis loves, he realizes sometimes everyone has their ghosts, and he discovers an unexpected ally who is prepared to risk everything for him.
* * * * *
Set in the small cathedral city of Salisbury, Master Chef Lewis Mandineau no longer owns the Laurels, the restaurant that had been in his family for generations. Betrayed and robbed by an ex-lover, he's had to sell to Carnegie Enterprises, an American corporation. That isn't all Lewis has to contend with. Rachel, his beloved younger sister has been left severely hurt by the car crash that killed their parents, and taking care of her has to be his priority.
Enter Devon Trelawney III, sent to assess the viability of the restaurant and its staff. Devon knows all about family tradition. But he also knows sentiment has no place in business matters, and the Laurels' potential is swamped by the debts it has accrued. Devon is a hardheaded businessman, first and foremost, but Lewis and Rachel test his resolve in different ways. Soon Devon is forced to admit that what seems like an impossible love can sometimes become something very real.

Who really knows you? For that matter, do you really know who your friends or family are? The answer is: no. You may have a love of your life living and loving with you but when all are revealed, the very ones whom you thought to trust may be the very ones who may turn on you.

Lewis Mandineau's family has been a part of Salisbury scene since the seventeenth century, when their family had fled France. Their restaurant, Laurels, had been a part of that scene for a long time as well and the name of both family and restaurant were highly respected. When his parents were killed in an accident, his younger sister barely surviving, he had trusted his life and businesses to his partner. When he next turned around, he had lost all. That was two years ago and now, the representative of the new owners of Laurels is coming to town and the future of his family, his remaining friends, and the restaurant he still ran, was up in the air.

Devon Trelawney III came to Salisbury hell bent on trouble-shooting his family's latest acquisition. Grumpy and hot tempered from jet-lag, exhaustion and a blinding migraine, he does not send the best message across to his new 'staff.' Seeing the famous Chef Lewis in person was not something he was prepared for either. The sparks fly, the migraine progresses, and the chamomile-lemon-honey tea is served. Thus was the start of a relationship that may not have begun as a beautiful friendship, but was well getting there. If only life and business did not have to be complicated by threats of arson.

This romantic mystery is a very light read. The relationship that developed between Lewis and Devon did not start off well but they managed to work things out together and they did work hard at it, unwilling to let anything fail - business or relationship wise. The process of getting to know each other, getting relaxed and comfortable around the other, that went a bit slowly but very surely. Soon, the two men had sort of settled on their courtship game only to be complicated by outside threats and an unexpected romance-tinged surprise that came out of nowhere. Still, the two managed to get their relationship in gear well on the way to a happily ever after.

What did I like about this story? Despite Devon's background edging on the billionaire-plot, this did not read like one at all. Even better, neither Devon nor Lewis have any egos that clashed or wills that dominated. Both men were relaxing characters to read and somehow, that made them even more romantic and surreal in a way. This ease in the characters' personalities and behaviors was, for me, the real story behind this read.

What am I grumpy? Well, its the first of the series called the Salisbury Tales and the introduction of one character I really, really, want to read about: Jon. This means, there is more to this tale than we are left to believe. I guess we wait it out and find out what happens next in Salisbury.

...and I am not the most patient when having to wait :( Is that asking too much?


He’d seen photos of Lewis, but nothing had prepared Devon for the shock of seeing a gorgeous guy on his knees in front of him, let alone that he had what could easily have been blood splashed across his chef’s whites.

Cochineal. Okay, that spread of red had been the first thing he’d seen, but then he’d noticed the blue eyes, the short brown hair frosted with blond. He wasn’t sure if the scruff on the man’s face was designer stubble or he’d missed shaving for a few days, but it looked good on him. But Devon wasn’t here to drool over the staff. He had work to do, and he couldn’t afford to let one of his migraines push him to his knees. Not caring if he looked like a complete idiot, he pulled sunglasses from his pocket and slid them on to cover his eyes. He saw the questioning expression on the chef’s face but didn’t offer comment. Let him think what he wanted—it wasn’t as if Devon had the mental capacity to care at the moment.

His head was already a mess of history and facts about the place, and he sure as hell wasn’t going to remember Tudor this and Jacobean that. Something about folding doors or ceilings or something. None of it had sunk in. It was enough that he had been able to focus on table arrangement. Even that had the band of hurt tightening.

Blinking at the disturbance collecting in his vision, he attempted to focus on the office itself. The medium-sized room was a haven of normality, apart from the TV and DVD player in one corner and the easy chair in front of it. What the hell?

Before he could be offered one of the regular chairs in front of the desk, he strode around it and sat in the executive chair. It was a simple reinforcement of what Devon was in this equation, one he employed in every situation like this. He wasn’t here to be friends, he was here to see if his father’s acquisition could be streamlined enough to turn a decent profit. And if not, how disposal could be handled. That was all.