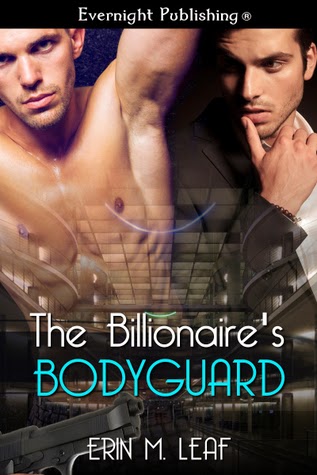 Billionaire Alex Roman needs a bodyguard. His best friend, Jesse Emerson, an ex-Security Forces Specialist, needs a job. What could possibly go wrong?
Jesse thinks protecting Alex will be a piece of cake. He’ll get to spend quality time with his oldest friend while avoiding his ex-girlfriend. Of course, nothing ever goes as planned. Why would Alex introduce him to everyone as his lover? And why didn’t Alex tell him about the threatening notes he’s been receiving for months?
Alex has been in love with Jesse for years, not that he’d ever admit it to his best friend, but he’s not above making a practical joke out of it. Telling everyone that Jesse is his boyfriend will go a long way toward relieving the stress of the threats he’s been plagued with recently. Unfortunately, when someone tries to shoot him at a charity gala, he discovers that maybe he needs Jesse’s skills more than he realized…
…because sometimes a billionaire’s best friend is the fake boyfriend who’s really his bodyguard.

So here I am, being laughed at by some good friends who know that I NEVER read billionaire books. Unfortunately  for me, I read the blurb, saw the cover and I fell in to temptation. There was just something so delicious and irresistible to the premise that I just had to have this.

Alex is a billionaire who has had it all, including a great grandfather, a butler who loved him like a son and a best friend with whom he'd grown up with. The death of both grandfather and butler was a blow neither young man could comprehend but whereas Alex had to stay and settle the estate and deal with the company, Jesse ran off to join the Air Force and eventually become a Security Forces Specialist. While away, they never lost contact and Alex made sure to make Jesse financially stable and a partner. When Jesse finally came back, he flitted from one location to the next and never really settled. It seems that it only took a loco ex-girlfriend to send him running back to Alex and beg for asylum. It was only then that Jesse finds out the threats on Alex's life and so takes it unto himself to protect his best friend. Unfortunately, Alex decided to not only introduce him as the partner that he really was but as the boyfriend too. That triggered a whole lot of action and drama (but not too much).

This was  a really fast, light and heated read and I cannot help but grin stupid over this. Okay, so I don't normally read 'billionaire' but these two men were so delicious on that cover and the story was light enough to finish within an hour before bed. Sure, there were some holes left in but it only lent grinning entertainment for me which  I soooooo needed. It was definitely an hour well spent and it did send me to silly dreamland marking it a perfectly entertaining read for me. Billionaire or not.