Review: The Burdens of Truth (Avondale Stories #6) by Etienne 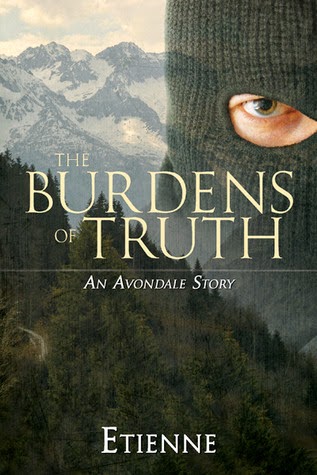 Professor and secret government analyst Ian Sanderson’s bad day gets worse when he arrives home one miserable November evening to find an apparently incriminating photograph in a FedEx envelope in his doorway, followed by increasingly threatening photographs over the next two or three weeks. It isn’t just Ian being set up: his partner, Randy, a lieutenant colonel working on a top-secret Pentagon project, is also at risk. Someone obviously wants something, but what? And from whom?
Soon, a mysterious caller demands that Randy disclose information about the project he's been working on. When he refuses, Ian’s and Randy’s sons, David and Paul, are kidnapped from an Amtrak passenger train. Resourceful and intelligent, the boys manage to escape—only to find themselves lost and alone in a remote wilderness. With time running out, can Ian and Randy track down their blackmailers? Or will the man known only as The Broker claim another set of victims?

The Avondale Series is just about my absolute favorite M/M genre series there is. For one thing, it is written by Etienne, but really, what I love about this series are the different standalone stories of gay men living regular but unusual lives and they all live within the area of Avondale, Florida. What makes this unusual is that all the characters somehow gravitate towards each other and fans of the series know that somewhere, there is going to be a new developement on the others' stories as they somehow manage to sneak in at the most unexpected times.

One of the books that stuck with me is this story about two couples, both gay. One couple is Ian and Randy and the other is David and Paul. What makes them unusual is that Ian and Randy are the parents of David and Paul but they had remained 'closed' from society. Circumstances drove these two men to seek each other and finally live together as a family. What the two fathers suspected was that their sons were a couple as well, but the two boys kept things secret, too.

Randy's work is what one would consider as 'high risk' and he and Ian took every precaution to make their family safe. They had highly secured homes and the boys were sent to a highly secured school. However, when a project he was working on did not go the way some people expected it to, things started to go a little strange. When their sons get kidnapped, then things got a little tougher.

Although this is a standalone, we still read that George and Mike are still front and center of this story. They are the men who stumble into the boys and make it easier for Ian and Randy to catch the kidnappers faster. For those who are fans of this author Fold, Do Not Starch, the latest installment to this series, touches on the rescue of the two boys.

The story is told in the very straightforward voice that is distinctively Etienne. There are no flourishes, there are no curly cues, there are no fainting divas who queen out their frustrations for society's illogical logic. The men fell in love, they got stuck in the closet society pushed them into, they love their sons and they do all they could to get them away from harm. Period.

What makes this such an interesting and page-turning read is the way the scenes unfold. There is no hesitance, the reader is kept guessing as to what happens next and last but not least, the definite heat between the couples is ever present. The boys act like the boys their age do and have that invinsibility complex that got quickly dashed off the edge of the cliff and raging rivers. Their fathers, they act tough but in the privacy of their bedrooms and family room, they were fathers who loved their sons and would risk everything to keep them safe.

Etienne says he does not write romance. I have read every single work this man typed out. I don't know, but I am a romantic at heart and straighforward voice or not, his works are some of the most romantic I have read especially when reading about the the circumstances that drove Ian and Randy together, as well as David and Paul.