Review: The Lifeguard and the Geek by Jamie Urban 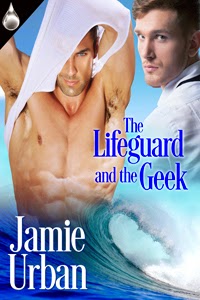 If a sexy, straight lifeguard and a closeted, virginal geek can get past their fears they might have a shot to turn their unlikely friendship into a scorching-hot chance at true love. The Lifeguard and the Geek by Jamie Urban proves that sometimes friends make the best lovers!
A virgin and in the closet, graphic novelist Griffin Parks visits California for work and instead find himself face-to-face with sexy ex-pro surfer Drew Lynch. A card carrying geek, Griffin knows he has zero chance with the straight and handsome Drew.
Lifeguard Drew Lynch is between girlfriends and oddly enchanted by sweet, awkward Griffin. Secretly bi-curious, but never enough to act on his same sex interests, Drew seeks Griffin out, drawn to the guy in a way he’s never been to anyone before.
The more time Griffin spends with Drew the more he likes the man behind the outgoing lifeguard persona. And with each day Drew shares with Griffin, his sexual curiosity about men, and Griffin in particular, ignites a little more.
Both men notice each other and like what they see, but each is skittish about rocking the boat. Can this lifeguard and geek let go of their fears enough to reveal their deepest secrets and desires to each other? Do Griffin and Drew dare risk their friendship for a shot at true love?

Griffin is a graphic artist/author and was collaborating with an online friend, Charlie, when he is invited to meet and greet the latter's roommates. Shy and quite (virginal), Griffin does not really come out of his shell and who could blame him? When he sees roommate Drew, he knew he was in trouble.

Drew is a lifeguard and quite straight but bi-curious. So he is between relationships now and not really interested in looking for the moment, but when he meets Griffin, his curiously needed to do something about his fascination with the shy man.

The friendship begins and the two become close. Soon the other roommates notice that there was much more to the two's relationship, especially when a WIP hero started resembling Drew in more ways than one.

This was an sweet read for me and it was quite romantic in a sense for although there was an instant spark of attraction, there was no insta-bed-insta-hea plot. The two did get their friendship stronger first and Drew actually began to develop into a stable individual, especially when he got caught by his roommates collecting the graphic novels of Griffin, even those that were no longer in print. That was really sweet of him.