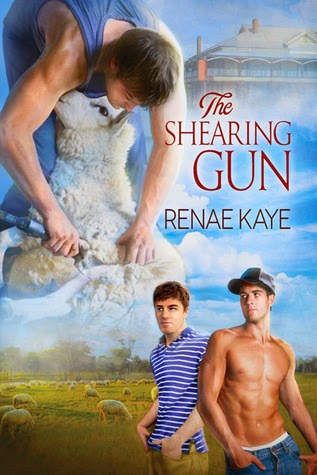 At twenty-five, Hank owns a small parcel of land in Australia’s rural southwest where he supplements his income from the property with seasonal shearing. Hank is a “shearing gun”—an ace shearer able to shear large numbers of sheep in a single day. His own father kicked him out when his sexuality was revealed, and since no one would ever hire a gay shearer, Hank has remained firmly closeted ever since.
Elliot is the newbie doctor in town—city-born and somewhat shell-shocked from his transplant to the country. When a football injury brings Hank to Elliot’s attention, an inappropriate sexual glance and the stuttered apology afterward kickstarts their friendship. Romance and love soon blossom, but it’s hard for either of them to hope for anything permanent. As if the constant threat of being caught isn’t enough, Elliot’s contract runs out after only a year.

I have quite a few favorites out there and I added Renae Kaye a long time ago, ever since I read Loving Jay. I keep falling in love with the men and their stories and keep reading over and over again purely for entertainment. That her stories are mostly set in Australia, ayayay!!!!!

It took me some time to get to this and it had been there for a long time but once I opened, I just dropped all and said: forget it, I am reading this and loving. On the second read, I still loved. And yes, I finally decided to review after the third read. Now that! is saying something :D

This is a story about a doctor (and you know me and doctors hehehehee) and a young farmer. The setting: I cannot pronounce but I can copy paste: Dumbleyung which is basically nowhere rural Australia. The community is small, the farms far apart and the sheep number in the tens of thousands. A fitting setting for a champion shearer a.k.a. a shearing gun.

One of the entertainments down under is shearing sheep the fastest, the cleanest, and the neatest. Of course there are a whole lot of things to consider like the breed of the sheep and whatnots but it all boils down to: number of sheep sheared x AU dollars = money.

And everyone knows that money is hard for all farmers and Hank is one such farmer who tills his land on his own and tries to get the relief he could by driving off to the city. You see, Hank is gay and maybe this is not a good thing, especially as his father made sure he felt alone.

Then there is Elliot. He comes from one of those high-falutin family names that when said simply meant: money. He is also gay which made his mother, the matriarch, not so happy. But he proved himself. He is a brilliant doctor and he wanted to help. He chose Dumbleyung first because it meant 'somewhere in the middle of nowhere' then because of one man who was first his friend and soon became his one and only.

As well as all the flies that flew every which way.