Jack Byrne is an Australian who lives and works in the Australian outback training horses, doing farm work, and trying to stay out of trouble. He writes from experience (sometimes unfortunate experience!) and has been shot at (“a case of mistaken identity”) and bitten by a snake before. He writes on a laptop with a satellite connection and likes to ride or drive out to locations he is writing about to get a real feel for the surroundings.
He is happy to hear from readers.  He can’t promise an instant reply as he goes out working sometimes for a week or so, but he will get back to readers as soon as he can. 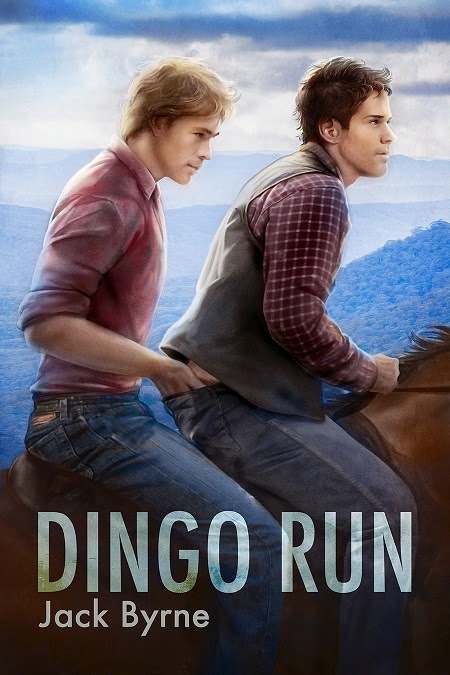 New South Wales, Australia, 1876. As captured outlaws, Jim Kelly and Mark Turner face the gallows. Help comes from an unexpected quarter, but their hasty escape goes wrong and now Jim's life hangs by a thread. Mark is driven by desperation to form an alliance with an infamous bushranger who may hold clues to his mysterious past. But as Jim and Mark’s relationship intensifies, it is also tested. Their secret is discovered, tempers fray, and jealousy flares.

Usually it is difficult to get your bearings straight while reading a book that just happens to be the third book of a series of novellas. Somehow, though, I did not have a difficult time at all. In fact, read as a standalone like I did, this was a totally enjoyable read. As for the back story, I had no difficulties for the author inserted the information here and there and frankly, I did not even miss it. I just loved reading about Jim and Mark's adventures about running from the law and trying to survive the outback without much means of medicines and fresh food!

Now this is an cowboy adventure story that took me a bit by surprise especially when coming across lines like "preternatural hearing" and "unnatural strength." Then there was the scarred ears of Mark which obviously depicted a painful cutting off of the tips. These parts of the story really intrigued me while the rest of it was just part and parcel of the cowboy love story set in Australia. Aside from the paranormal twist, the romantic interludes and the morbid curiosity and hinted resistance to a same sex relationship were very much expected.

What truly got my attention was the descriptive way this was written that even those who may never have been to the outback could clearly visualize the panoramic scenes as written by the author. Visual reads are irresistible to me for that makes me 'see' the unfolding of the story in my mind's eye, telling me the author is really talented. Although, it made my feet tingle a bit when the descriptions went further into the blood exchange scene. That just.. ugh... I could imagine my medical technician friends shudder at that... although frankly, that is how they did go about things during those times - good thing it freaking worked! (Sorry, but when medical stuff are part of the story I manage to focus on those scenes :D)

As for the rest of it? Well, things are going a different way and Mark is just about thinking he may finally get the answers he'd been searching for a very long time. How it unfolds in the later installments, well, I guess we better follow this series, right?

Then Jim’s arms were around his neck, and Jim pulled him into a deep kiss. Mark surrendered to the kiss, careful because he could still feel the remnants of the fever in Jim’s hot lips and slightly uncoordinated movements.

He laid Jim back on the swag, kissing him so softly that Jim whispered, “I’m not going to break, you know.”

“I know.” Mark carefully removed Jim’s shirt and pants, then stripped him completely, kissing him all the while.

He stopped for a moment to undress himself, spared the horses and the cave entrance a glance, and then returned to kissing Jim. Dan wouldn’t be back for hours.

Silently he pressed kisses down Jim’s broad chest, nibbling gently at the hard nubs of his nipples, feeling with gratitude the chest below rise in a gasp as he did so. Mark tasted the taut stomach, slightly salty with sweat, and heard a moan of pleasure from Jim. He smiled and licked again, a gentle dab of the tongue, and got the same response. He listened to the contented moans from above and kept giving tiny licks and nips down Jim’s stomach, which was now rolling under him and pushing up into the pressure, until Jim’s erection bumped Mark’s chin. Mark lifted his head slightly and carefully took the taut glans into his mouth, tasting more salt—there was fluid leaking from the tip.

Mark smiled and worked the glans in his mouth, running his lips and tongue around in circles until Jim was pressing rhythmically up against him, pushing for more contact. Mark let his mouth open a fraction more to allow Jim’s erection to slide gradually farther into his mouth and heard Jim groan, “Oh-oh.” He looked up to see Jim’s chest heaving and blue eyes looking down to him, hooded with desire. The taste of salt increased, and
Jim became rock hard in his mouth.

Mark wet his fingers with spit and precum and teased them around the outside of Jim’s entrance, wetting it thoroughly before slipping a finger in, then another and another. Jim’s moans became more desperate. Mark pushed his fingers in and out, circling them, then plunging them in and out of Jim’s body again and again until Jim’s moans gained a pleading tone. Then he extracted his fingers and shifted upward to let his own leaking erection press against Jim’s hole.

Jim grabbed Mark’s hair and pulled him up to kiss him frantically, his breath coming in rough gasps in Mark’s ear. Mark teased him, nibbling and ghosting kisses across his neck until Jim begged, “Take me!” and claimed his mouth in a bruising kiss. Mark lined himself up and watched Jim’s face for any sign of a wince as he pressed into Jim slowly, his own erection so hard now that he didn’t have to guide himself in. The hot walls of Jim’s channel closed around him, and he heard himself give a guttural groan as he pressed slowly into the warmth and pressure of Jim’s body.

Jim closed his eyes and whispered, “I’m gonna shoot my load any second.”

Mark whispered back, “Open your eyes, then.”

Jim did, and the desire and pleasure in them was enough to make Mark growl again, grab Jim’s shoulders, and thrust hard and deep into him. Jim’s neck arched back, and he gasped. Mark wanted to sink his teeth into that exposed neck and thrust again and again, but he resisted and stilled, then pulled himself out very slowly.

Mark hesitated, then continued, watching the pleasure contort Jim’s face as he did. Jim’s teeth were gritted as Mark pushed himself fully home, and Jim whispered, “You’re killing me.”

Mark nibbled on his ear and breathed, “I almost lost you this morning.” He bucked his hips once, hard, and Jim gave a small noise.

Mark began to withdraw again with agonizing slowness, then heard a strangled whisper from Jim. “I can’t—”

Mark smiled and thrust himself in again, slowly but powerfully, pushing himself in until he was fully seated, then giving that slight buck inward that he knew Jim loved so much. Suddenly he heard Jim gasp and felt hot moisture between them and Jim convulse against him. He held Jim through his climax, watching the handsome face tighten and tip away from him as Jim arched up against him. He pressed quick, hot kisses up the corded tendons in Jim’s neck and whispered hotly in his ear, “I love you.”

Mark kissed him and waited for Jim to meet his eyes again, then began to pump into him, still slowly, but putting all the power he could muster into his thrusts. Jim watched his face as he did so, and something in his look undermined Mark’s control so he began to thrust rapidly and deeply into Jim. Mark groaned his pleasure with each movement he made and was not sure when the groans became low growls.

Pleasure began to build in him, each push into Jim’s now slick, tight channel sending a thrill through his whole body. He struggled to keep control, but despite his best effortswas soon rutting into Jim’s body with abandon. When his climax came, it was intense, tightening his whole body and leaving him shaken.

Jim’s voice broke through the silence. “What do you feel?”

Mark looked up into his eyes. “What?”

Mark hesitated. “You. Inside you. The heat.”

Mark hesitated for even longer, then whispered, “I wouldn’t know.”

They lay in silence for a few moments, then Mark asked, “What do you feel?”

There was a long silence, then Jim said, “You. Like you’re part of me. Like you come into my body, and we’re one person. And every time we do it, I want more.”

Mark looked away, then couldn’t resist looking back, and saw Jim’s eyes gleaming at him. He asked, “Would you go back to a woman? Do you want children again?”

Jim stared off into the distance. “I don’t think so. Haven’t thought about it. Have you?”

Mark nodded. “I bet you were a good father.”

Jim’s eyes suddenly turned ice blue, and he turned to Mark and answered, “If I had been, they’d still be alive, wouldn’t they?”

Mark blinked, unsure what to say, and looked away.

To get a chance to win an ebook copy of Walkabout, leave a comment below and don't forget to leave your contact email address.
We will randomly pick 2 lucky commentators and Jack Byrne will email them their ebook version of choice.
To claim prize, we will be sending an email to the address provided by the lucky commentators. Don't forget to tell us what format you prefer.