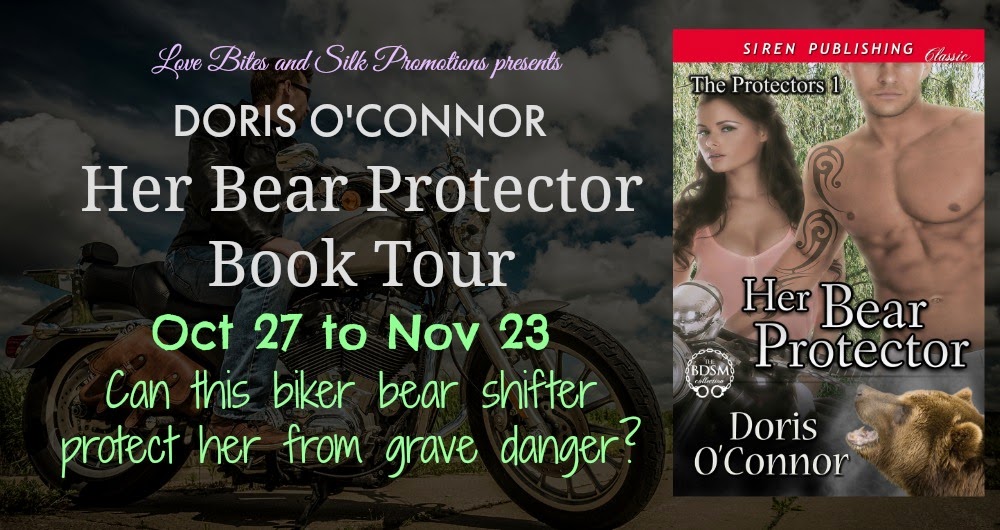 Glutton for punishment would be a good description for Doris... at least that's what she hears on an almost daily basis when people find out that she has a brood of nine children, ranging from adult to toddler and lives happily in a far too small house, cluttered with children, pets, dust bunnies, and one very understanding and supportive husband. Domestic goddess she is not.
There is always something better to do after all, like working on the latest manuscript and trying not to scare the locals even more than usual by talking out loud to the voices in her head. Her characters tend to be pretty insistent to get their stories told, and you will find Doris burning the midnight oil on a regular basis. Only time to get any peace and quiet and besides, sleep is for wimps.
She likes to spin sensual, sassy, and sexy tales involving alpha heroes to die for, and heroines who give as good as they get. From contemporary to paranormal, BDSM to F/F, and Ménage, haunting love stories are guaranteed. 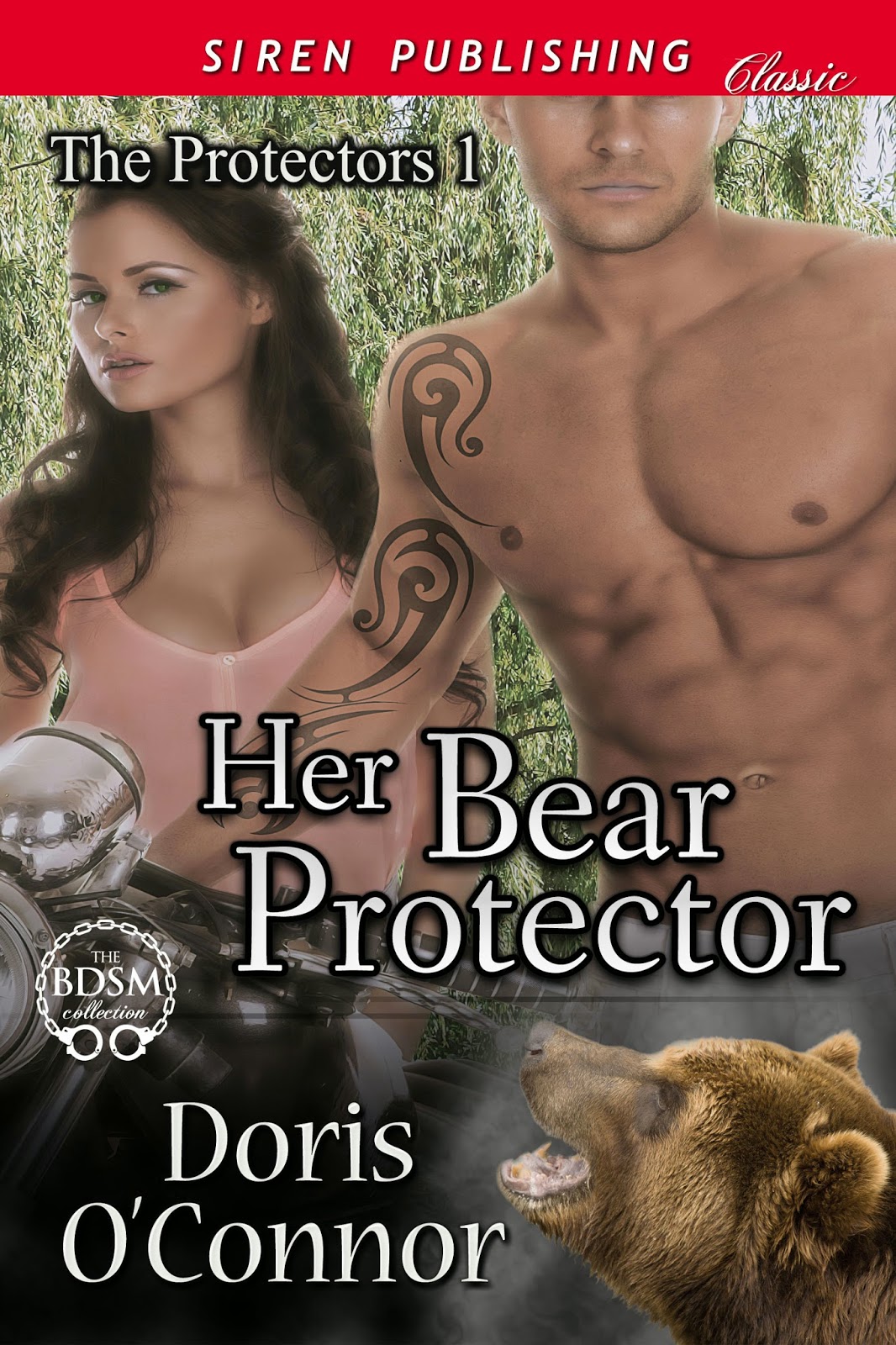 From the minute Ronan Bernhard roars into Tina Snowdon’s sleepy village on his Harley, he inhabits her thoughts and dreams. The inked mountain rescue biker is a sex-on-legs hunk, and her knickers aren’t the only ones that melt in a flash at his wicked smile.Ronan, however, keeps his distance and simply becomes another client of her cleaning firm, until the morning she turns up and finds his cottage trashed, and her life is turned upside down.Bear Shifter Ronan recognises his mate the minute he scents her. Having her clean for him means he can watch over her from afar, because to claim her as his mate and sub is out of the question.As the village protector he has responsibilities he can’t ignore—duties that will place Tina in grave danger—even if she were able to accept not only his bear, but also his darker desires. The morning she finds him injured, his bear takes over…

Careful Careful
Hot!
Blood rushed in her ears and she yanked at her restraints, but it was useless.
“Sir?” She hated the wobble in her voice, but where was he?
“I’m right here, babe. I can see you, and let me tell you, the sight of you bound and naked to do with as I please makes me so damn hard. I might have to jack off to make this last.”
Tina moaned at the mental images that brought to mind, and Ronan chuckled. The bed dipped again and he ran his hands up and down her arms and over her breasts. He rolled her nipples between his fingers and pulled. Tina gasped and arched her back into his touch. Every roll and pluck made her pussy clench, and she couldn’t help her moan of need.
“Yes, you like that, don’t you? Such sensitive nipples. I wonder what you will make of these.” Something cold touched her nipples, to be replaced by his mouth. Ronan suckled hard and then attached something to her hard peak. Tina went rigid when he tightened the tension.
“Sir, please, that hurts.”
He stopped whatever it was he was doing immediately and some of the pressure on her nipple eased.
“Color?”
“Yellow.” She squirmed to try and get away from the tight feeling around her nipple and he loosened it further, until she could breathe easily again.
“How about now, babe?” 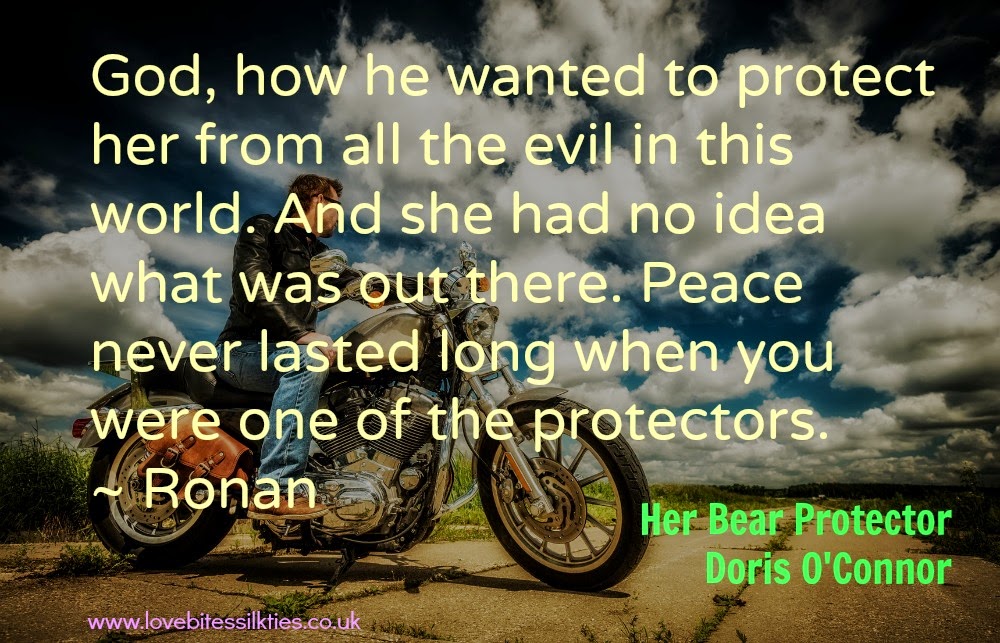 It was on the tip of her tongue to cry yellow again, if not red, but actually there was no need. It felt strange, but it didn’t hurt anymore, and she took a deep breath and murmured, “Green, Sir.”
“Good girl.” The obvious approval in his deep voice sent waves of heated arousal across her skin. She would just about do anything to please him, she realized with a start.
His mouth closed around her other nipple and she squirmed anew as he suckled that nub until it felt hugely distended. Tina clenched her thighs together to relieve the ache in her pussy, and he blew across her nipple. It felt cold against her slick skin, and this time when he clamped whatever it was on that side, she welcomed the slight pinch. He adjusted it to just the right pressure and Tina slipped a little deeper into the sensations assaulting her.
“If only you could see yourself, babe. Those are nipple clamps, linked by a chain, and if I do this…” Something tugged at her nipples at the same time, and Tina arched her back and moaned. Oh lord, that felt way too good. Tiny shards of pain skittered from her nipples in an invisible line to her clit, and she panted her arousal.
Ronan’s chuckle sunk into her consciousness like molten chocolate, and his next words sent her on fire.
“You look so fucking sexy, babe. I’ve got my cock in my hand and I’m stroking it for you. My fingers are wet with my pre-cum. Here, taste what you do to me.”
He ran his fingers along the seam of her mouth, and Tina opened eagerly. His unique salty musk exploded on her taste buds, and she sucked the digits further into her mouth. Ronan groaned, the bed dipped, and she needed no encouragement to open her legs wide. Instead of taking her however like she expected him to do, something cold hit the inside of her thigh and she yelped in surprise. He withdrew his fingers and surprise turned into a moan when that thing started to vibrate and Ronan held it right over her clit. Pleasure surged and her hips bucked upward to get closer to those delicious vibrations. Her orgasm build in ever tighter circles, and just as she was about to fly off that cliff, the vibrations stopped.
Tina yanked at her restraints and swore.
“Fuck, noooooo, damn it.”
A swat to her thigh was her reward, and Ronan’s voice held an edge of steel.
“Such foul language from my girl. I think she needs something else to occupy that mouth.”
Before she could even grasp his intentions, the bed dipped next to her head, and he hooked his finger into her mouth to force it open. His scent enveloped her when he pushed his cock past her lips, and Tina eagerly opened wider.
Her scalp stung, as Ronan wrapped his hands into her hair and fucked her mouth. It took mere moments for his cock to pulse and for the first drops of his cum to hit the back of her throat. 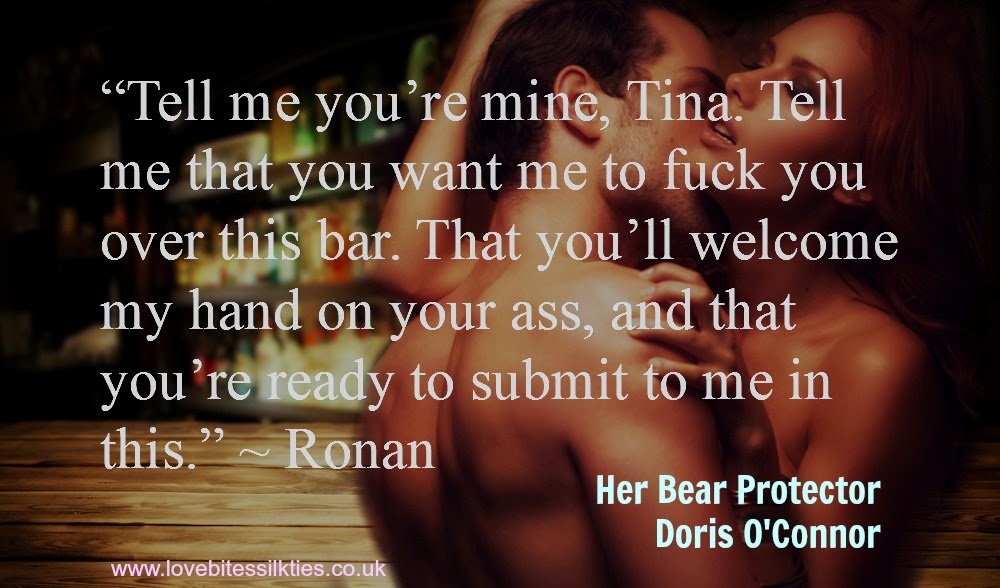 From the minute Ronan Bernhard roars into Tina Snowdon’s sleepy village on his Harley, he inhabits her thoughts and dreams. The inked mountain rescue biker is a sex-on-legs hunk, and her knickers aren’t the only ones that melt in a flash at his wicked smile.
Ronan, however, keeps his distance and simply becomes another client of her cleaning firm, until the morning she turns up and finds his cottage trashed, and her life is turned upside down.
Bear Shifter Ronan recognises his mate the minute he scents her. Having her clean for him means he can watch over her from afar, because to claim her as his mate and sub is out of the question.
As the village protector he has responsibilities he can’t ignore—duties that will place Tina in grave danger—even if she were able to accept not only his bear, but also his darker desires. The morning she finds him injured, his bear takes over…
Doris O'Connor somehow manages to make a hot book out of any topic and Her Bear Protector, the first of The Protectors Series, is yet another one. Remote country village + cleaning lady + bear? Yep.
Tina Snowdon is looking for a place that will give her peace and she thinks she's found it in the tiny village deep in the Cumbrian countryside. With her cleaning service running well, she's quite comfortable. That is, until a certain Ronan Bernhard moves into the abandoned cottage at the edge of the village and takes her on as his cleaning lady.
She's attracted to him, but well, who wouldn't be? Unfortunately, he's forced to keep his distance from her since he's not only a nursery teacher/mountain rescuer but the guardian to the entire village of shifters that human Tina had unwittingly moved into. So while she's definitely his mate, she's also off limits for the time being.
All comes to a head when she gets to his cottage after he'd been attacked and he's forced to shift in front of her to save his life. How will Tina deal with the truth that's in front of her? Can she accept something that she's always thought of as fiction? And how will she welcome the dominant mate she's wanted when he's not fully human?
Of course the story has a happy ending, but the situations they have to fight through in order to get to it are what makes this novel. Unbeknownst to the humans, the village is under attack and Ronan is their only line of defense. These attackers know no boundaries and will kill anyone who stands in their way, human or not.
Her Bear Protector a fun, steamy, and quick tale that definitely whets the interest for the next book in line of The Protectors series. While Tina's and Ronan's situation is somewhat resolved, there is something else going on that is threatening everyone's safety. What it is would need a whole other book (or more) to explain. I hope that comes out soon, Dorris O'Connor!
Posted by Ramona at 1:30 AM