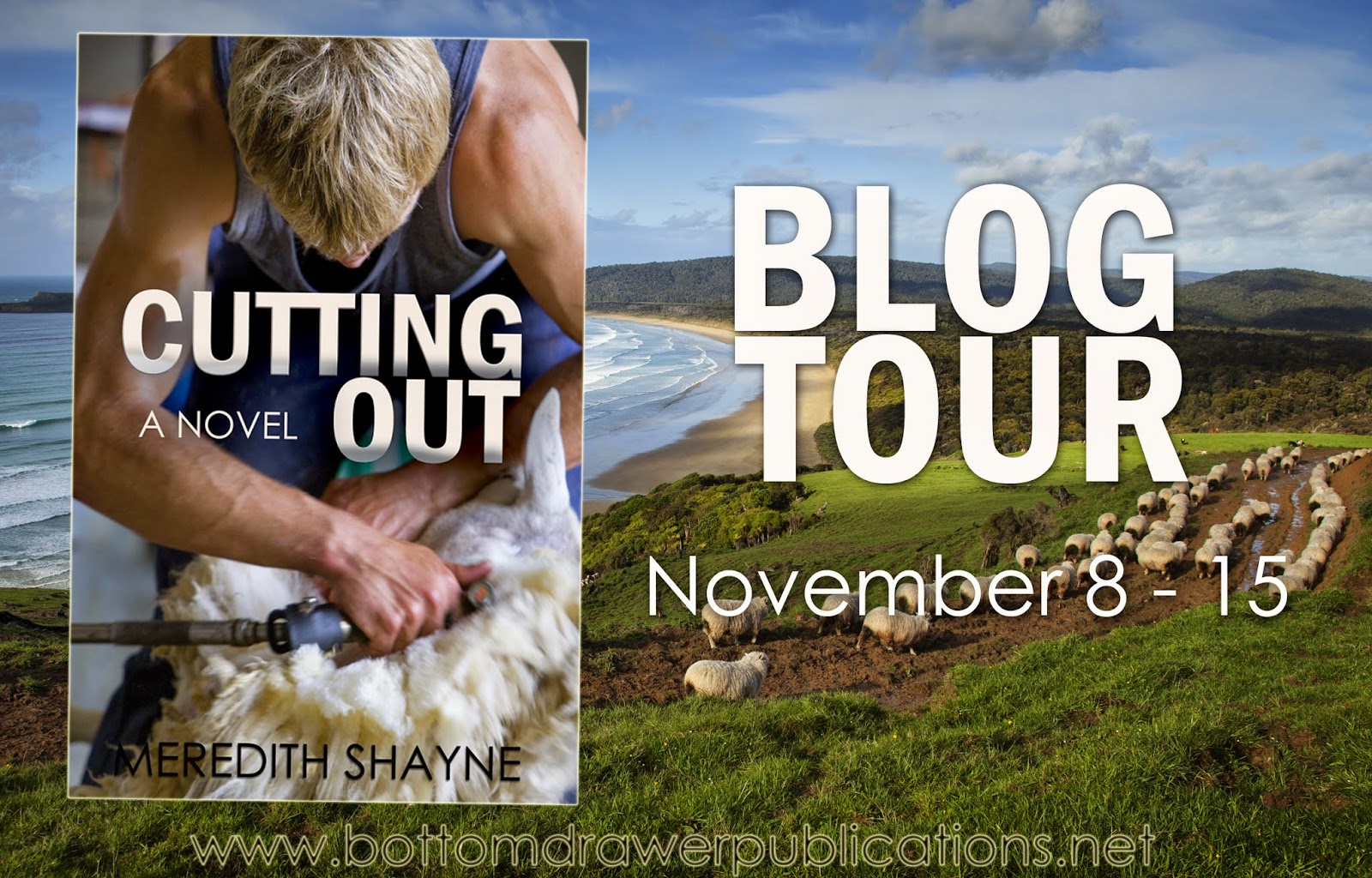 Bottom Drawer Publications is proud to present Cutting Out by Meredith Shayne, a contemporary mm romance based in New Zealand.

A scientist in a past life, these days Meredith Shayne mainly uses her scientific training to poke holes in television pseudoscience. Originally from Australia, she moved to New Zealand to start a new life a few years ago and hasn't regretted it for one minute, even if she frequently wishes that the New Zealand weather was a little better; if she's forced, she'll admit that the refreshing lack of animals that can kill you in New Zealand makes up for a little rain.
Meredith travels a lot, so much so that she has developed a shameful love of airplane food and knows her passport number by heart. When she is at home, she enjoys baking, horrible music from the 1980s, reality television, and gloating any time Australia thrashes the living daylights out of New Zealand on the sporting field.

The e-book is available for sale for $5.99 via the BDP Digital Shop
and other online booksellers.

A twenty-year veteran of the shearing shed, Aussie Shane Cooper loves his job, and the home he’s made for himself in New Zealand. If he’s a little lonely, he’s got good mates to keep his spirits up. When a hot, cocky young shearer named Lachlan Moore catches his eye at a competition, he’s content to look but not touch, knowing the young man is out of his league. Lachie wouldn’t mind a piece of Shane, but the gorgeous gun shearer from Australia is soon forgotten when the Christchurch earthquake hits, and tragedy strikes Lachie’s family. Lachie deals with it the best he can, cutting himself off from all he knows. A year later and he’s back in the shearing shed, out of practice and lacking confidence. That Shane’s there to watch him flounder doesn’t help his nerves.As Lachlan struggles to re-acclimatise, Shane can’t resist giving him a hand to get back on his feet. As they move from friends to something more, Shane finds himself wanting to know everything he can about Lachie. But Lachie’s got secrets he desperately wants to keep, and when things come to a head, those secrets might just mean the end of them before they’ve truly begun.

Lachie had to deal with a tragedy that no only struck his family but his whole community. As a direct result of said tragedy, he had no choice but to give up on his dream to be a shearing gun and be a handyman, a construction worker and every other job he could get to keep food on the table. With a mother going into depression and siblings who think they can sit their butts out from responsibility, Lachie dreams of going back to shearing and maybe, just maybe, find someone he could share his life with.

Shane Cooper has had twenty years of shearing and has the medals to show just how good he is. Once, he chanced seeing a young man who had the potential to beat his record but that young man disappeared. When he next sees him, Shane was curious why Lachie was not performing at his best. In fact, if Shane could assume the worst, it was as if the young shearer not only lost his time, but his confidence in his ability. Attraction aside, Shane had to help and be the mentor to get the young man back on his shearing feet. Soon, their relationship becomes more than mere mentoring and soon crosses over to a full blown affair.

Unfortunately, it is just this thing that Shane could not accept. He wanted more than an affair and yet it seemed that Lachie's walls were too thick and his secrets too deep. How Shane could break down those walls and get Lachie to lighten up and be open about their love for each other is a journey that was both heartbreaking and hopeful.

Set in New Zealand, this is a beautiful story about shearers who love their trade. Meredith Shayne takes her readers with her to take a peek into the shearing men's lives and maybe dream that amidst all the wool and lanolin, maybe there can be love too. 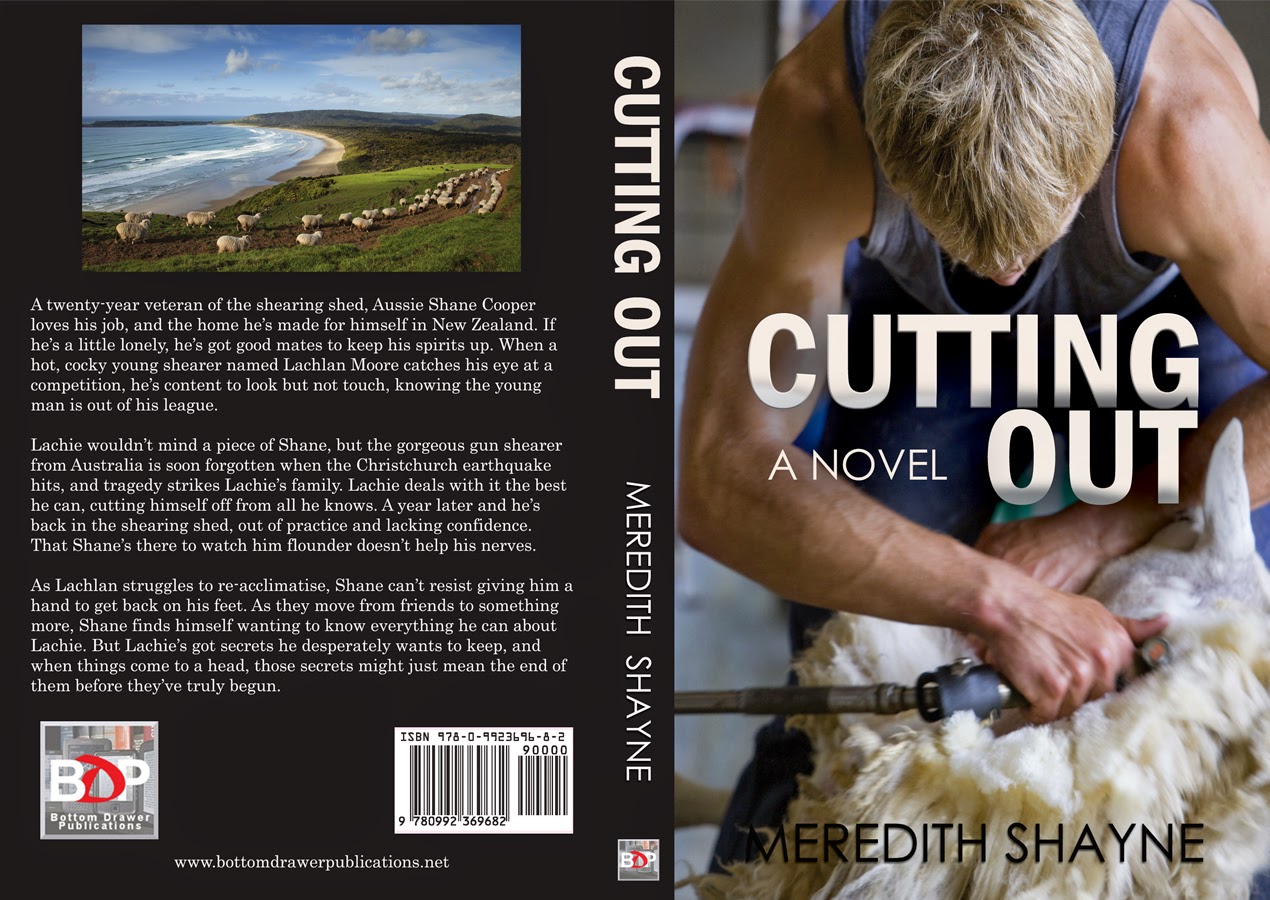 Paperback copy of Cutting Out