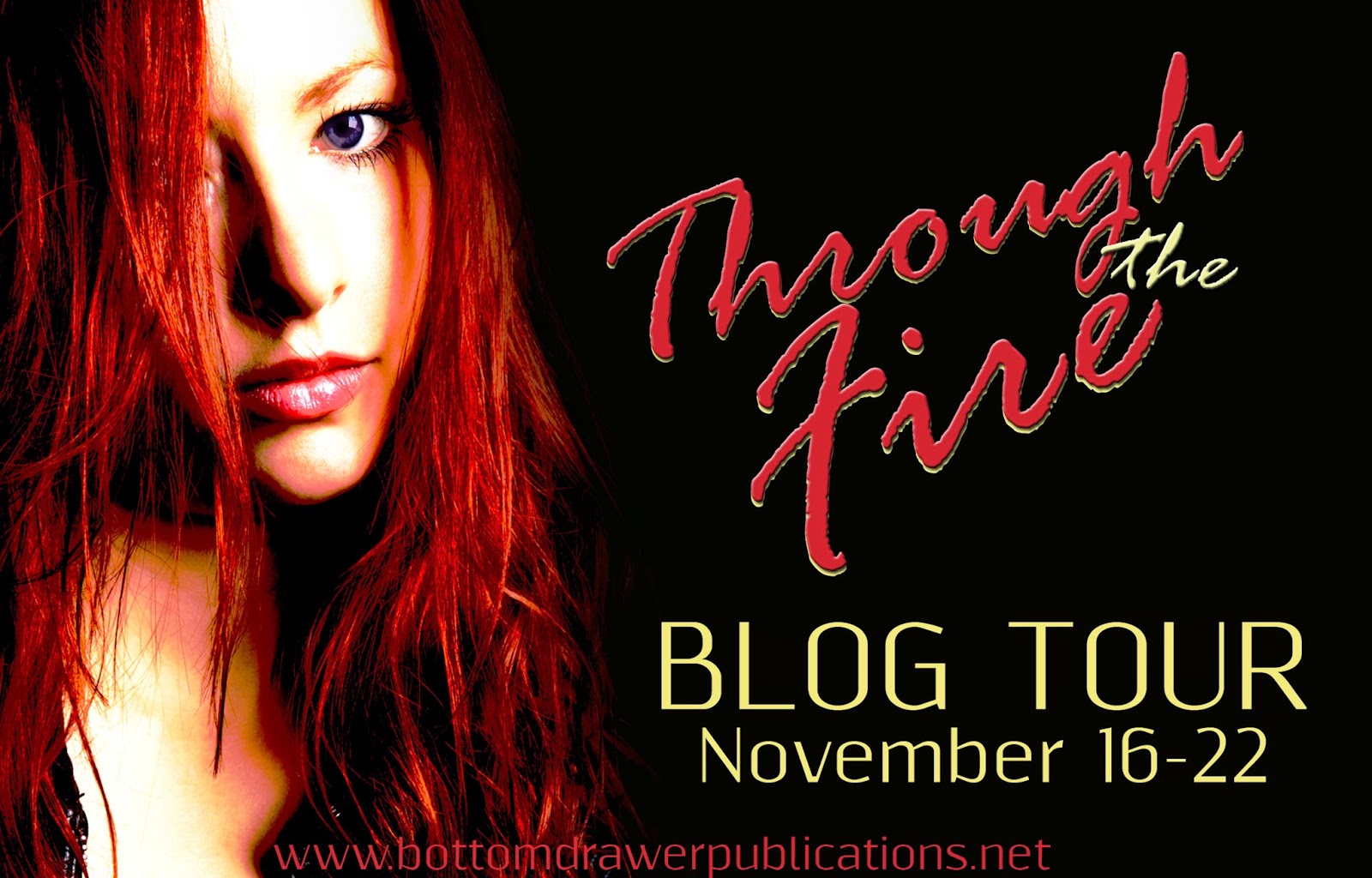 Michelle Irwin has been many things in her life: a hobbit taking a precious item to a fiery mountain; a young child stepping through the back of a wardrobe into another land; the last human stranded not-quite-alone in space three million years in the future; a young girl willing to fight for the love of a vampire; and a time-travelling madman in a box. She achieved all of these feats and many more through her voracious reading habit. Eventually, so much reading had to have an effect and the cast of characters inside her mind took over and spilled out onto the page.Michelle lives in sunny Queensland in the land down under with her surprisingly patient husband and ever-intriguing daughter, carving out precious moments of writing and reading time around her accounts-based day job. A lover of love and overcoming the odds, she primarily writes paranormal and fantasy romance.

Through the Fire
Michelle Irwin

Bottom Drawer Publications is excited to be taking Through the Fire, a new adult, paranormal romance by Michelle Irwin, on tour.

Book Details: Novel
Genre: NA, Paranormal Romance
Release Date: October 31, 2014
The e-book is available for sale for the special tour price of $4.99 via the BDP Digital Shop and other online booksellers.

Evie Meyers’ life is one spent on the run. Every minute of every day, her life is in danger if anyone should suspect the truth about her ancestry. Her father was willing to risk everything to keep the truth hidden, even from her, but the lies he fabricated were exposed when her high school crush, Clay Jacobs, inadvertently stumbled upon her secret. His discovery puts Evie at risk from a secret organization tasked with washing the world clean of nonhumans—and Clay is one of its deadliest soldiers. Forced into a war she doesn’t understand, all because of what she is, Evie is left with no choice but to flee with her father to escape persecution.
When Clay reappears in her life, battle scarred and mysterious, Evie is unprepared and terrified as he forces his way back into her heart. When the battle catches up with her, and a tragic accident tears apart the peace she discovered, she finds herself alone and without the protection of her father, or her lover. Now, she needs to keep her secrets hidden and learn to survive on her own in a world that wants her dead, all while searching for the missing piece of her heart.

Michelle Irwin puts forward an interesting proposition with Through the Fire. What if mythology was skewed and what we understand as flaming birds or phoenix weren't birds at all, but people? And instead of being imaginary and extinct actually continue to exist in our world today?

Evie never really understood who she was; she only knows that she and her father have been fugitives since the day her mother died and life hadn't changed in any way at all. While her dad may even be described as neurotic, Evie just accepts that he's like that to protect their lives. However, being a teen, the lifestyle may have chafed a bit, especially when Clay starts showing an interest in her.

Clay had been Evie's crush ever since she moved to her new school. There's an attraction from him too, until he accidentally finds out what her secret is. He's torn between fulfilling his mission to kill non-humans like her and the intense pull he has toward this strange creature, as they normally call beings that aren't entirely human. He searches for her after they disappear from his life and their meeting again sets actions into motion that change their lives entirely.

There's such a mix of mythology and fantasy (yep, there's a difference) in this novel that it creates this whole new world, we can only imagine the tip of it. Living between two worlds can be disconcerting, to say the least, and the world that Evie's escaped to for her safety is strangely compelling. While it's beautiful and comforting, I'd agree with her feelings about being stifled with all that perfection. When you've lived in the reality where grit and beauty mix, the unending flawlessness just doesn't work.

I wished that she was able to meet more than one type of fantasy being, though. She was in a refuge and other fantastic and mythological beings were known, but she was the only different one there? Why? If others needed to be rescued too, why was she still alone? I hope she will have a few more encounters in the future.

The idea of The Rain, now that's interesting. Disturbing, but interesting. It's a great play on those groups who want a cleansed, homogeneous world and refuse to accept that there should be more than just the physical in front of them. If they see something different, their only answer is kill and destroy. Hate to say it, but very human indeed.

Through the Fire ends with an awful cliffhanger because of the danger that Evie's been through. I hope Michelle Irwin has started on the sequel because I have to know how Evie survives and if what I suspect of Clay is true! 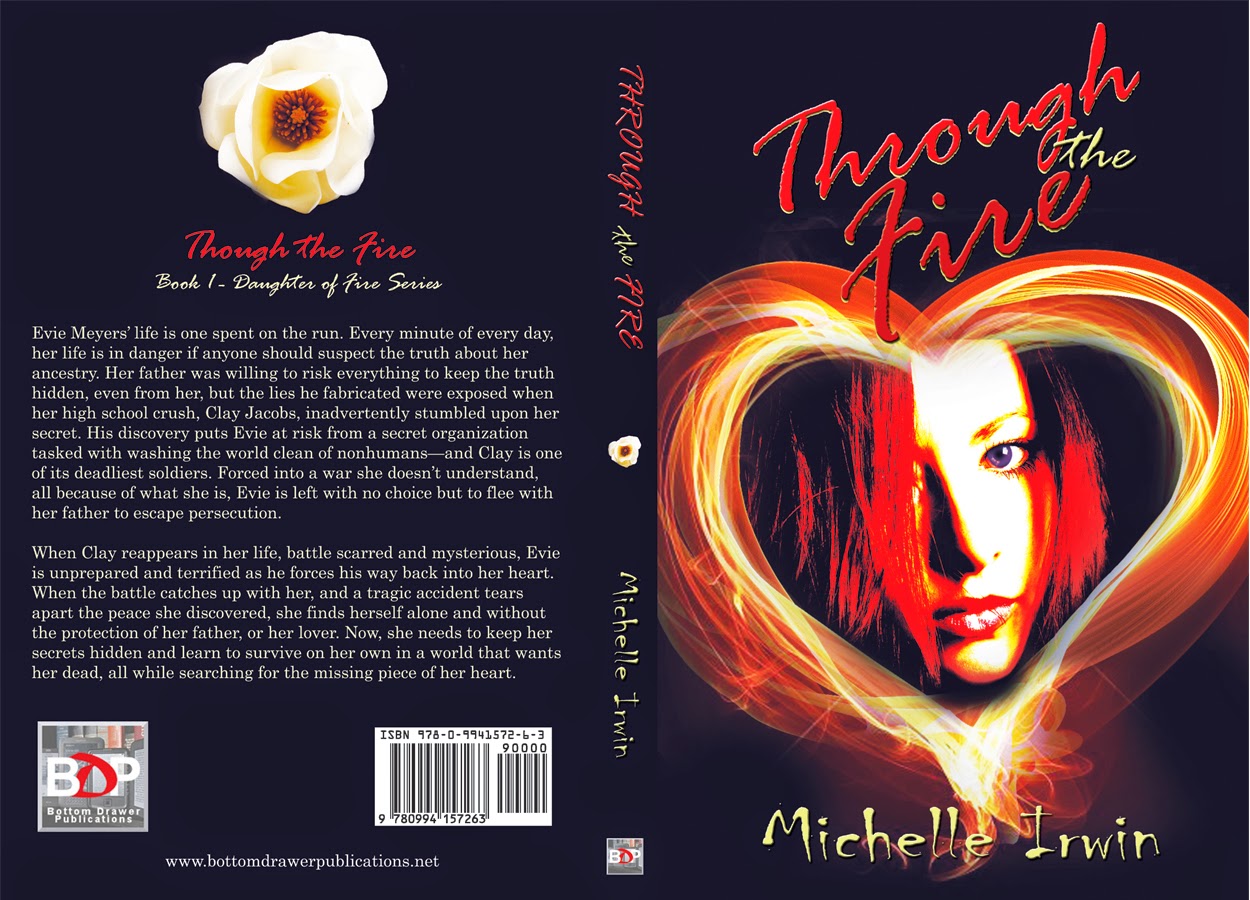