RJ Scott has been writing since age six, when she was made to stay in at lunchtime for an

infraction involving cookies. She was told to write a story and two sides of paper about a trapped princess later, a lover of writing was born.
As an avid reader herself, she can be found reading anything from thrillers to sci-fi to horror. However, her first real true love will always be the world of romance where she takes cowboys, bodyguards, firemen and billionaires (to name a few) and writes dramatic and romantic stories of love and passion between these men.
With over sixty titles to her name and counting, she is the author of the award winning book, The Christmas Throwaway.  She is also known for the Texas series charting the lives of Riley and Jack, and the Sanctuary series following the work of the Sanctuary Foundation and the people it protects.
Her goal is to write stories with a heart of romance, a troubled road to reach happiness, and most importantly, that hint of a happily ever after. 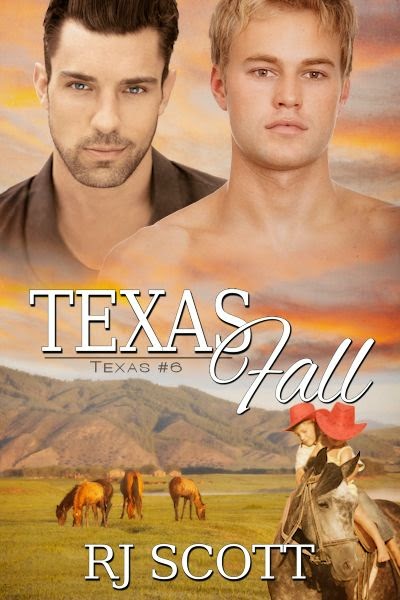 
Jack is focusing on building an equine therapy school for children with special needs and works hard along side his normal horse training and breeding program. He and Riley have settled into a softer, quieter, kind of family life, but that doesn't stop them using the barn with the door to the fullest!

But the lull comes before the storm.

Riley and his new assistant travel to Laredo, and across the border into Nuevo León as part of an exploratory team and things very quickly go to hell. Riley is caught in some serious Cartel problems and suddenly everything Jack holds dear is threatened.

Add in Vaughn and Darren's story, revisiting Robbie, Eli, Liam and Marcus, alongside Sean and Eden and the wedding that never was, and this story promises you everything you want from a Texas series book.

“You can’t hide the whole night,” Riley said from behind him. Jack turned to face his husband, leaning back against the stable door and waiting for the lecture. Riley was happy as a pig in shit right in the middle of it all: juggling babies, catering, socializing, and hell, everything that Jack was avoiding right about now. “People asked where you were,” Riley added.

Riley sure looked good tonight, his blond hair just this side of bed-head spiky, his long legs in black pants, the dark green shirt so perfect against his warm skin tones, and his hazel eyes sparkling with enthusiasm for life. Sexy. Very sexy, all toned and slim and hard and hot. Jack cleared the thoughts of kissing the life out of Riley from his head. He’d need all his faculties to deal with Riley when Riley wanted him to go back inside and host the party.

Anyway, he was suspicious that anyone really worried where he’d gone. “Who asked?”

Riley stepped right up into his space, close enough so that Jack could inhale the scent of his man. The combination of familiar citrus was underscored by deeper notes of mulled spices from the kitchen and some punch concoction Eden had made.

“Actually, no one asked,” Riley admitted. “Josh mentioned that he was impressed you’d lasted an hour.”

Jack huffed a laugh. He was surprised his brother hadn’t come out and hidden right next to him. Seemed that enjoying socializing skipped the male Campbell line entirely.

“So,” Jack began slowly. “What are you doing out here?”

Riley placed his hands on Jack’s hips, then slid his fingers through belt loops to tug Jack away from the door and flush up to him.

“I was asking myself,” he explained, “just where would my husband be when it’s only ten at night and he was looking for peace. I tried everywhere.” He pressed a gentle kiss to Jack’s lips, then smiled down at him, that few inches in height he had just enough to force Jack to lean his head back a little. “Actually that’s a lie. I looked in the twins’ room, checked in on Max, then came here.”

Review by multitaskingmomma
My Rating: 4.5 Stars

I just love anything Texas that involves the Campbells, the Hayes and their extended family.  Let me just get that out of my system!

The Campbell-Hayes family is facing another year and this time it is kind of busy. Not all good busy for there are times when it is hard to be with this family, but overall good. Now what is not good?

Well, Liam has to go to trial and be witness. His feelings of self-doubt and guilt are rising within him and it makes breathing difficult at times. He knows he has to do this, though, so he does do the expected. He does not like it, but he does. Thanks to his wonderful support group, he goes through the trial and comes out the winner for overcoming his fears.

There is Vaughn. He is not in such a good place but at least he has Darren, who is also not in a good place. In this book, we see their struggles first hand and no longer wonder at the whys and the hows. They do the right thing and make sacrifices and come out bigger men in the end.

Then there is Sean. His PTSD is on the mend, but he is far from cured. His sidestepping the wedding date issues in the past has come back to bite him and now is at his wit's end trying to convince Eden to finalize a date. Should he ask permission from Riley and will Riley grant it?

Finally, Riley. Jack has to lengthen and stretch out his patience band for his husband who now needs him more than ever. Riley had gone through a horrible ordeal and now cannot seem to get over his fears and nightmares. He is unaccepting of his weakness and so only worsens his PTSD. This is where Sean's ordeal comes in that guides him to the right direction.

Jack deals and he will continue to deal. He will deal until all ends for his love for his family is boundless. He finds himself the stronger man in this story but he is also the weakest.

As for the rest of the family, Hayley has come to terms and is planning, the twins are causing havoc and Max finds himself one with the horses.

No, not all is good but everything is better. This is the Campbell-Hayes family and it just keeps getting better and better!