RJ Scott has been writing since age six, when she was made to stay in at lunchtime for

an infraction involving cookies. She was told to write a story and two sides of paper about a trapped princess later, a lover of writing was born.
As an avid reader herself, she can be found reading anything from thrillers to sci-fi to horror. However, her first real true love will always be the world of romance where she takes cowboys, bodyguards, firemen and billionaires (to name a few) and writes dramatic and romantic stories of love and passion between these men.
With nearly seventy titles to her name and counting, she is the author of the award winning book, The Christmas Throwaway. She is also known for the Texas series charting the lives of Riley and Jack, and the Sanctuary series following the work of the Sanctuary Foundation and the people it protects.
Her goal is to write stories with a heart of romance, a troubled road to reach happiness, and most importantly, that hint of a happily ever after. 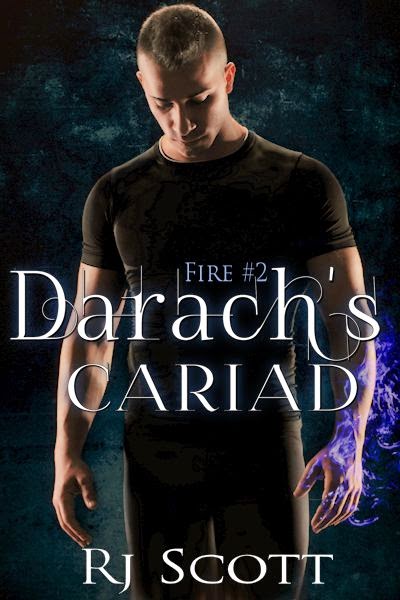 Darach Gravenor has blue magic. He is alone in his world and he wants to rescue his friend Kian from the horrors of the Other World.
Ceithin Morgan is Cariad. Strong with Ancient magic he teaches Darach that not all children's fairy stories should be believed. Ceithin has his own reasons for helping Darach and shows Darach that there is magic that he never even knew existed.
They are living on borrowed time. Guardian knows what they are doing and he is coming for Ceithin. Darach and Ceithin have two choices -- do they run, or do they make their stand together?

This book is available 7th November on Love Lane Books, Amazon and AllRomance.
Book 1 in the series, Kian’s Hunter, will be available at 99c from 7th of November until the end of the month.

For all buy links – http://rjscottauthor.blogspot.co.uk/2014/04/darach-book-2-in-fire-trilogy.html


Excerpt
In one surge of movement, Ceithin snapped the fragile blue Fire trying to hold him in place and had the younger man pinned to the floor in bonds of crimson. His visitor opened his mouth. Ceithin stopped any potential shout for help with a casual flick of his wrist and a spell to silence Darach. Carefully, he eased to kneel next to his new prisoner. He only had one question for Darach. A rhetorical question given the frightened man was spelled into absolute quiet, but a good one to get out into the damp cold air.
“What are you doing here, you idiot?” He rolled to his feet and looked down at the figure prone on the floor, and a sudden uncertainty tugged at him. “Darach Gravenor.” The harshness of the syllables scratched at his throat when he spoke them, and he sensed immediate shock from his prisoner. He leaned closer. “The one who wants to follow. Kian told me, warned me you would try to find the Cariad.”
Darach shook his head, and his eyes widened in the dim light of crimson.
“I’ll let you loose. Are you going to scream? If I lift the hold, don’t make a sound, all right?” He waited until Darach nodded, then breath by breath, he snagged the bands of his Fire hovering around Darach’s face.

My Rating: 4 of 4 Stars
(Based on Short&Light Read Category)

This is the second book to the Fire Trilog and it continues the story that started out with Kian's Hunter. In this installment, we are taken back into the strange world where fire and magic dictate the destinies for those who carry them. In this world, the bond of two is strong, but in Kian's and now, Darach's, case, they had a bond of three, considered to be the strongest of the strongest. But the bond was broken when Eioin, the one who had the amber fire, was consumed by it, never to be seen alive again.

When Kian crossed over to find his Hunter, he crossed into a world where Demon's were becoming more powerful and there was a desperate need to stop the inevitable. On their home world, Darach found himself alone and unable to control his fire. When he heard there was a Cariad captured, he went out to save the man. He needed a Cariad to lead him through the barrier so he could find his missing bonded brother, Kian. First though, he must save the man and learn to control his fire.

The story that unfolds is a fast paced and quite a fast read. As the rescue ensued and the mysteries start to unravel, we find that Darach's inability to control his fire was simply because there had been no one to train him. In fact, the Council had managed to slowly chip away all semblance of practicality and left all the fire-bearers weak, unable to control their fires and eventually open for Demon attack. As Ceithin heals from his wounds wrought on him by the greedy council, he discovers that the young man who rescued him carries the blue fire. The same blue fire that when merged with his red, turns to the violet fire that was foretold in a prophecy that supposedly may change their world.

In the meanwhile, back to Kian and Regan, they, too, discover the mysteries of the other world. The visions Kian sees are inexplicable and yet were the very answers needed by the Guardian, the bearer of amber fire, to save not only his world, but that beyond it. First, they must go and rescue the other amber fire bearer. Who or where he is, they have no idea. But maybe, Kian does.

And that is where it ends! And I am so frustrated because then, RJ Scott, evil woman that she is, has announced the third and final expanded version book to this trilogy won't come out until January of 2015!

So the countdown begins and I am not a patient individual. 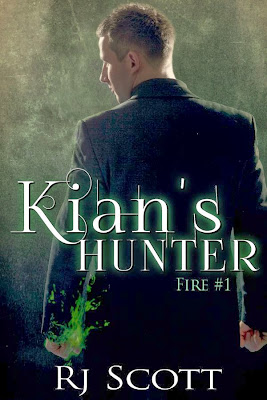 Kian has crossed over from his world to ours to seek revenge. His plan is to kill the monster who murdered his Uncle. The same monster who used magic to escape to our world and is hiding here and growing in strength.Regan Campbell is a hunter of Demons. The first son, of a first son, he is the one who protects this world from the monsters that no one else knows are here.When Kian reaches this world, he knows Regan is the perfect man to fight alongside him, but Regan trusts no one.It isn’t until they are facing death and a terrible evil that will be let loose, that Regan finally realises he can trust another...his fated partner, Kian.

Posted by multitaskingmomma at 3:41 AM