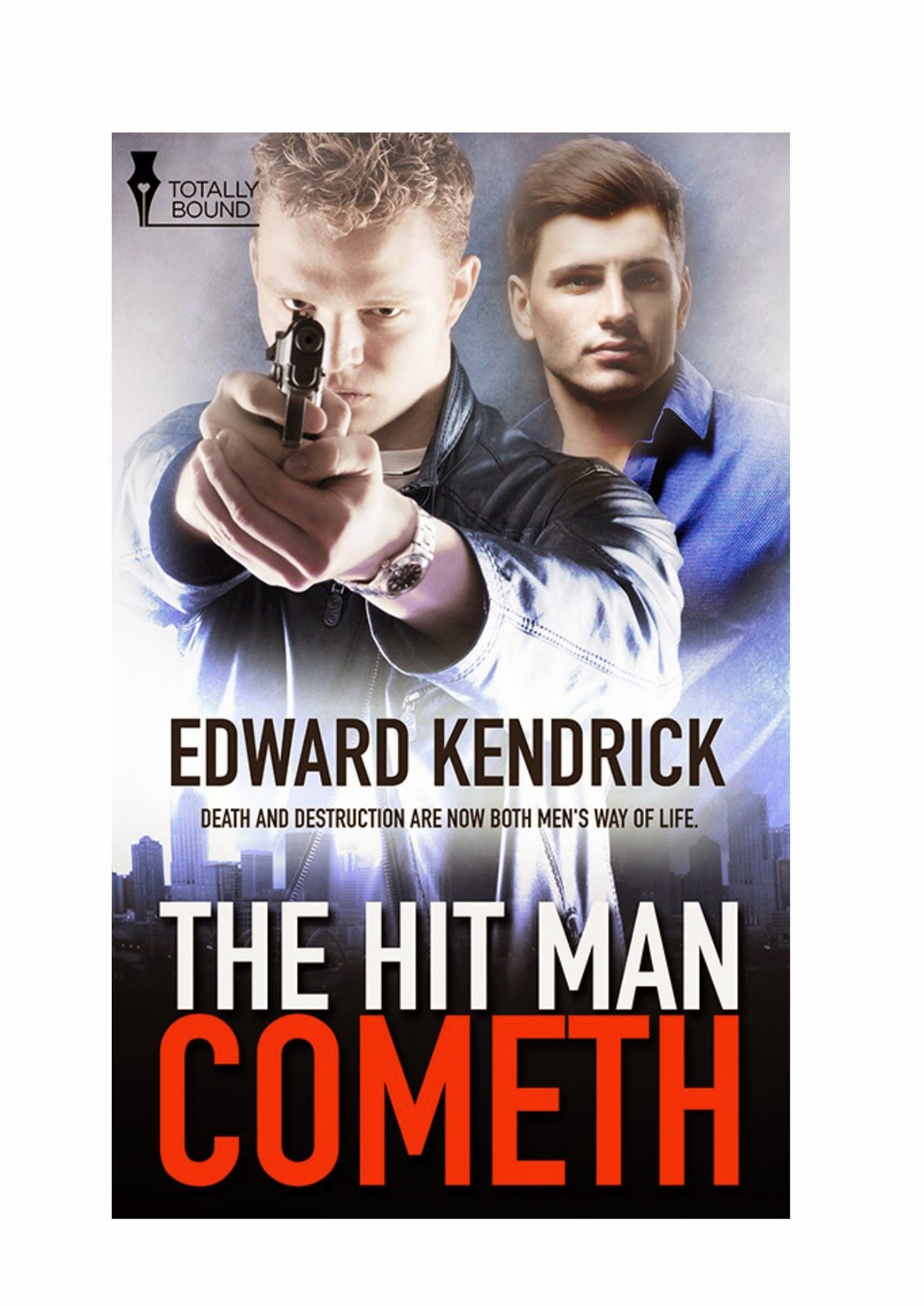 Mick is a hit man sent after Gavin. Can Gavin, an ex-conman and a shifter, convince Mick they should join forces before Mick kills him?Mick Whalen is a hit man hired to kill Gavin Wilde. However, when he tracks Gavin to a remote mountain cabin, he discovers that killing the coyote shifter is not in the cards. Especially when Gavin offers sex as an incentive to spare his life—an offer Mick does not refuse.At Gavin’s insistence, they find out who hired Mick before someone else is sent to finish the job. The most probable person is a vampire with an ax to grind because of something Gavin did to him in the past. With the help of Gavin’s bear shifter friend Torben, and Torben’s vampire friend Brynja, they set out to stop the vampire—perhaps permanently.Mick and Gavin decide to join forces since, as Gavin points out, he can teleport Mick away after a hit. The contracts come, and their rough bouts of sex heat up in the process.However, they’re almost killed on a job—a job no one knew about except Mick’s friend and handler Johnny. When Johnny is murdered, they team up with the two other hit men who also once worked for Johnny, to find and eliminate his killer as well.With death and destruction now both men’s way of life, will it draw them closer together—or destroy what has become more than just a friendship? Reader Advisory: This book contains light BDSM.

By reading any further, you are stating that you are 18 years of age, or over. If you are under the age of 18, it is necessary to exit this site.
Copyright © Edward Kendrick 2014. All Rights Reserved, Total-E-Ntwined Limited, T/A Totally Bound Publishing.

“One step closer and you’re a dead man.” Bram kept his gun aimed squarely at Gavin’s chest.
“I’m dead either way, so I have nothing to lose,” Gavin retorted with a grim smile, placing one foot in front of the other.
“Why? Why are you forcing me to do this?”
“Better you than someone I don’t know.”
“It doesn’t have to end this way.”
Gavin smiled crookedly. “Got a better idea?”
“Yeah, team up with me.”
“Marsdon would love that, considering he’s the one who sent you after me.”
“He doesn’t have to know,” Bram replied quietly.
“You’d turn on him?”
“Let’s just say it’s an option.”
Gavin frowned pensively. “If I were someone else, would it be?”
Bram shrugged, not lowering the gun. “Probably not. I’ve worked for him before. You know that. I complete a contract.”
Gavin glanced at his script before replying. “Four times by last count.”
“Yep. I won’t say they were righteous kills, but they at least had some logic behind them. Not”—Bram grinned wryly—“that it matters to me one way or the other.”
“So what makes this different?” Gavin couldn’t resist rolling his eyes at that line.
“Cut!” Chris Filmore, the director, called out. “Damn it, Gav, do you think you might act a little more suspicious? The two of you are supposed to be bitter enemies after what happened. Now he’s suggesting you team up. That’s not supposed to sit right with you.”
“This whole damned play doesn’t sit right with me,” Gavin snarled, walking to the edge of the stage to stare down at Chris. “Who wrote this dreck?” He waved his script. “Like I don’t know. The Tom Clancy wannabe you’re trying to get into your bed.”
“You read it before you auditioned. You knew what…”
Gavin held up his hand to stop him. “I read something. For damned sure it wasn’t this. He changes it on a whim, and you let him.”
“To make it more exciting,” Chris replied defensively.
“Bull. This”—Gavin tossed the script at the director—“is so fucked up even a two-year-old would laugh at it.” Jumping off the stage, he spat, “I quit. Sue me if you want to but I’m not letting my name be associated with something this bad. No way, no how.” With that, he strode up the aisle of the auditorium, barely noticing the man who sat in the back row, before pushing his way through the doors to the lobby.

Mick rapped one knuckle against his teeth as he watched the handsome, dark-haired man walk past him. What an ass. No wonder someone wants him dead. He chuckled under his breath as he got up to follow Gavin. He has no idea how close to reality the play is, even if the author is, as he put it, a Clancy wannabe.
Mick didn’t know who had hired him for the job. The contract had come, as always, in a heavily encrypted email from his handler. The down payment, once he’d agreed to take the hit, had been wired to his offshore account. All he’d been told was where to find Mr. Gavin Wilde. Nothing about why. It could be the result of some petty spat with a girlfriend—or ex-girlfriend. Perhaps another actor wanting the part. If it’s the latter, maybe the hit will be called off now since Mr. Wilde just walked away. He shrugged. Somehow I doubt it’s anything so minor. People don’t pay my asking price unless someone has done them some serious hurt.
He followed Gavin out of the theater into the midafternoon heat, muttering, “This is Colorado, not Arizona. Why the hell does it feel like a sauna in early July?”
He chuckled when a pair of women walking by smiled, then one of them said, “That’s what we were wondering too.”
After wiping the sweat off his face, thankful that his blond hair was short now and not as long as it had been two weeks ago, he started after Gavin, keeping his distance. Not that the man would be aware of him, or anyone for that matter, Mick figured. Not as fast and as angrily as he’s striding along at the moment.
When Gavin turned left onto a side street then went into a parking lot, Mick waited to be certain he had actually got into the dark red sports car Mick knew belonged to the actor. Then he hightailed it back to where he’d parked his motorcycle. He wasn’t afraid of losing Gavin in the interim, as he’d put a tracking device on the car before going into the theater to check out his target.
Five minutes later, Mick, on his black Suzuki Bandit, hung back several car lengths behind Gavin as the actor veered onto Speer Boulevard. From the direction he was going in, Mick figured Gavin was heading home.
Mick knew he lived in a high-rise not too far from the Cherry Creek Mall, a very upscale shopping center in east Denver. He had cased the building soon after hitting town. Gavin was on the tenth floor in a north-facing condo, according to the information Mick had on him. The building’s security was excellent, though nothing that Mick couldn’t bypass with time or guile—whichever suited the moment. With some jobs, he might have been pissed that there were no tall buildings close enough to it that he could use one as a sniper base to take out his target, if things didn’tworked out right. Not with this one, however. That wasn’t an option.
As soon as Gavin pulled into the parking area on the north side of the building, Mick found a place in the lot across the street. From where he sat, he could watch the balcony of Gavin’s condo with the pair of high-powered binoculars he kept locked in his saddlebag along with the case holding his DRD tactical rifle, among other weapons. He was rewarded when the man walked onto the balcony a few minutes later, a glass in one hand, to lean against the railing.
Regretting your little temper tantrum? Mick figured, from the frown on Gavin’s face, he might be doing just that.
Suddenly Gavin slammed his hand on the railing, spun around and went back inside. Less than five minutes later, Mick saw him leaving the building, heading to where he’d parked his car.
Now what’s going on? Mick didn’t have to wonder for long. He followed Gavin about ten blocks before the actor pulled into a parking spot just off Third on Clayton. Mick tailed him on his bike as Gavin walked to Second and entered The Cricket. Then he drove to the lot in front of a large health food store, locked the bike and strolled back to the bar. The place was busy, and loud. Mick eventually found a spot at the end of the bar where he could watch Gavin, who sat alone in a booth at the back of the room.

We have Mick who is an assassin for hire. His task is to 'off' one Gavin Wilde, actor and all-around a$$. Supposedly. Then we have Gavin himself. He is an actor, yes, but he also has a long background as a con man. He is also a coyote shifter which makes him wily as manipulative could be. The two meet, the con cons the assassin, the assassin takes the con, both like the results, and then we have an unusual partnership.

Basically, these two main characters are not your usual main squeezes. They are what I would call the anti-heroes who I just love to love and kind of get frustrated with. Mitch and Gavin, they don't have much of morality dear readers, neither do they have much of a conscience to speak of. No, they are not pathological liars or psychotics, they are just who and what they are because of their backgrounds. But I do really like them, although as fictional men, not in real life. They are kind of scary and deadly and sexy, just the type of men I like to spend an afternoon reading about.

This is a different Kendrick, but I likey! So more of this, I am waiting and wanting for.