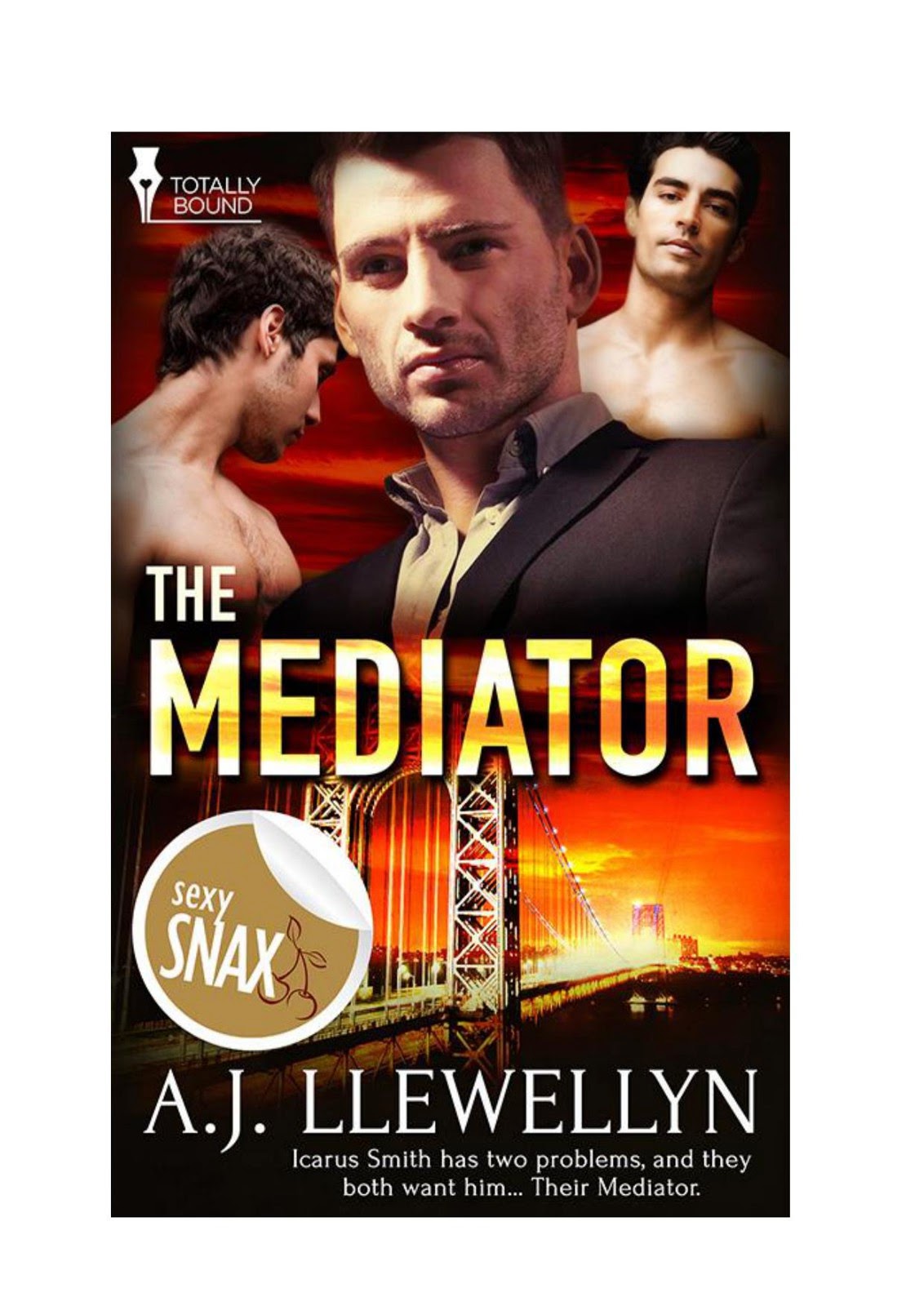 Icarus Smith has two problems, and they both want him…their Mediator.Icarus Smith has just landed an unusual assignment. A licensed mediator used to handling squabbling spouses, he’s been hand-picked to negotiate a forty-million-dollar welterweight championship title fight. The problem is, these two world boxing champions hate each other. Worst of all, Icarus has discovered that one of them, Italian superstar Paolo de Luca, is the man with whom he had a passionate affair in Italy the previous summer. Paolo cruelly dumped him, and Icarus realizes he is still devastated. Can he overcome his personal feelings to work with Paolo and the boxer’s arch-nemesis, US champion Adam Wyler?So far, the fight scheduled to take place at New York’s Madison Square Garden is a bust. Fans have bought tickets, and Pay-Per-View sales are through the roof. Just like Lady Di’s face once adorned dishcloths, these guys have their faces on buttons, badges, posters, TV and print ads. And they don’t care.But Icarus has an even bigger problem. He’s just accepted promoter Thaddeus Halsey’s huge wad of cash to broker this deal and Icarus wants the money for a restoration project in his hometown in Las Vegas. Can Icarus go through with mediation? Can he persuade the man who broke his heart to face the guy who now apparently wants it?Reader Advisory: This book contains scenes of multiple male ménage.Publisher's Note: This book was previously released by Totally Bound under the same title. It has been expanded, revised and re-edited for re-release.

By reading any further, you are stating that you are 18 years of age, or over. If you are under the age of 18, it is necessary to exit this site.
Copyright © A.J. Llewellyn 2014. All Rights Reserved, Total-E-Ntwined Limited, T/A Totally Bound Publishing.

“You’re ordering that?” Jerome Curtin scoffed at me.
I looked up from the menu, trying to hide my embarrassment. Ten minutes I’d known the guy, and it was ten minutes too many. Before I could respond, a man in red silk pants and a lime green shirt rushed by me on stilts. Jugglers followed him, then came the singers. The diners around us began to applaud. To my astonishment, the statue of an old man sitting on the bench right opposite me came to life.
Ah, Venice.
The briny smell of St. Mark’s Square and the canal’s waters filled my senses with nostalgia. The singers in their brightly colored costumes gathered near the fountain, gaudy masks held to their faces, and started to sing. The Carnevale di Venezia came beautifully to life. The twilight ambience with its flickering wall sconces put me in a better mood, as did the old Italian folk melody. I recognized it, but didn’t remember how.
“Sir?”
I glanced back up at the waiter. Pity flashed in his eyes. I guessed he’d had his share of bad dates, too.
“Sorry.” In a flash of joy it came back to me. “Lu Me Sceccu,” I practically shouted.
My table companion looked startled then he rolled his eyes. “Number one on Billboard, was it?”
Well! No need to be rude. “I know that song!” I tried to place it and it hit me.
I couldn’t believe that almost eighteen months later, I’d buried the memory so deep that it hurt to recall it. It was like a scar on my soul. I spent my whole life counseling people, urging them to forget the past. Me, I’d just submerged the pain in work. I took a deep breath and grabbed my glass of iced water.
“Sir?” The waiter’s eyes were full of sympathy. “Are you okay?”
No. “Yes, I’m fine, thank you.”
Jerome Curtin suddenly leaned across the table and kissed me. As if that wasn’t bad enough, he slipped his tongue into my mouth. It was like being invaded by an electric eel.
I pushed him off me. “What are you doing?” I sputtered as iced water ran down my suit and tie. It figured that the one time I’d splurged on new clothes, they’d be ruined.
The waiter produced hand towels out of nowhere and gave them to me, still looking like he felt very bad for me.
“Thank you.” I pressed the towels against my soaking wet shirt.
“You looked like you wanted to be kissed,” Jerome said.
Not by you.
“You had this look in your eye.”
Yeah, I could just imagine. I’d thought I was over it—him, that is. The astonishing man I’d met that summer, when I’d found the love I’d thought would never die. Lu Me Sceccu. I smiled now, recalling that it was an elderly woman’s love song to her dearly departed forty-year-old donkey.
“Icarus, you’re keeping the man waiting!” Jerome blared the words at me over the top of the singers’ voices.
A busboy appeared and deftly replaced the tablecloth, gave me a new napkin, then refilled my water glass. I thanked him. I could feel water seeping into my underpants. Later, I might find this funny. Right now, I wished I’d gone home and caught up on case work, like I usually did.
“I’ll have a dozen oysters,” I said, changing my order. “And the tomato ricotta salad, please.”
The waiter nodded. “Excellent choice, sir.”
As he took Jerome’s order, I grasped for the fleeting moments of sheer happiness I recalled from that magnificent Sunday lunch when Pio had taken me to meet his family. I had never felt so accepted, so…embraced by a family. I’d wanted to be with them forever. And it wasn’t like me, not at all, to fall so quickly, so hard.
To love total strangers so deeply.

Icarus is a mediator and is usually hired to mend bridges or make sure the bridges are there, ready to be crossed peacefully by two parties from opposite sides. He is very successful at this but as it is, his aim to give life once more to a community that had been destroyed by politics, he needed more money. As fate would have it, a boxing match is looming in the horizon and the promoter himself comes out of nowhere, offering him money and bonus he would be crazy to refuse and he finds himself in the middle of a rivalry that seems to be getting into full out war. Thing is, if the war breaks the match gets cancelled. His job: make sure the match pushes through. His problem: the match involves two world boxing champions of different categories who are not only out to kill each other, but do so with Icarus as the prize.

Now, as a hot blooded male, Icarus could have just shrugged it off and let ego go the mile high and get on with the fun. The complication comes in when one of those boxers just happened to be someone whom Icarus had fun with in the past but got his heart broken. Now, it would have been okay if they were just going all angsty over everything, but the other boxer wants in on the fun too! Icarus now finds himself between a million dollar deal, a boxing match that may get cancelled, and two hot and angry champs who puff up their chests to attract his attention. Decisions, decisions, Icarus cannot make.


Note: Copy provided by publisher for an honest review.
Posted by multitaskingmomma at 3:00 AM